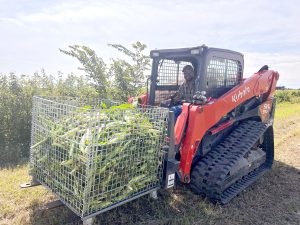 A bin of sweet corn from Nayak Farms moves from the Grundy County fields to be loaded and trucked to a Chicago-area food bank. (Photo courtesy of David Nayak)

“I think God is calling us to feed our state,” Nayak told FarmWeek the day after helping with his first harvest at the Greater Chicago Food Depository.

“The timing is right. We need all the food we can get,” said Stephen “Steve” Ericson, executive director of Feeding Illinois.

Through Nayak Farms’ efforts, 16,000 pounds of sweet corn were divided into about 13,200 meals at the Chicago Food Depository. That same day, the second of his new, refrigerated semitrailers delivered sweet corn to the Northern Illinois Food Bank in Geneva.

It seems a guardian angel and greater power helped along the way.

A central Illinois native, Nayak described how he and his wife, Alicia, concentrated on food insecurity in Chicago after medical school. An idea to establish grocery stores, possibly in a school, was tied up in red tape and logistics, but the couple’s desire to fight hunger continued.

“I think God is calling us to do something bigger,” he remembered telling his wife.

That’s when 160 acres in Gardner came up for auction after being owned by the same family for 100 years. With an idea to fight hunger by growing food, the Nayaks attended the October auction in Dwight, bought the land, retained the longtime tenant family and joined the Kendall-Grundy Farm Bureau. 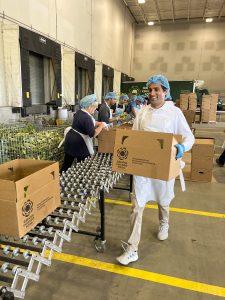 Nayak chuckles recalling when he told his farm operator, Brian Christensen, about planting sweet corn to donate on some acres instead of soybeans and field corn. Christensen guessed they’d plant half an acre and was surprised to hear Nayak’s goal of 16 acres and 250,000 pounds of sweet corn.

And the doctor proposed to spread out sweet corn harvest so his farmer staggered planting. On the last week of July, two of the 16 acres were picked. Nayak’s goal is to harvest every 10 to 14 days until mid-October. “I want to grow the most delicious, best-tasting corn,” he added enthusiastically.

Along with the farmland, other necessities came through at the right time. After learning about harvest losses, Nayak bought a one-row corn picker that was delivered only weeks before harvest — “just in time,” he said. Nayak also secured the needed trucks, bins, pallets and boxes to transport the harvest.

Nayak Farms is donating the sweet corn to food banks, while the doctor’s foundation, Strength to Love, is coordinating the truck drivers, fuel and logistics, he explained. “We are blessed by God to have the ability to do this,” Nayak said.

The Farm to Food Bank initiative’s second-year progress has exceeded expectations, Ericson said, adding “I’m thrilled with where we are.”

In addition to Nayak Farms, the initiative also gained Gibbs Family Farms in Woodford County and Roth Countryside Produce of Morton along with others. The initiative’s pilot farm, Rendleman Orchards in Union County, has increased its participation, Ericson said.

With big plans and more ideas, Nayak hopes to donate 1 million pounds of sweet corn within a few years and provide off-season donations from a future building with a cooler and freezer. His progress may be guided by a guardian angel, his late mother Dr. Anjuli Nayak. “I think my mother is smiling down,” Nayak said.