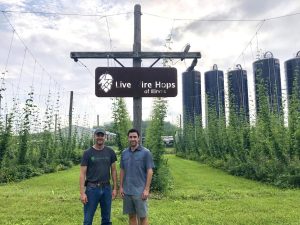 What started as a chat over beers led cousins Brian Dallam and Anthony Welty to build a 1-acre hopyard in Amboy, where they grow five varieties of hops. To date, Live Wire Hops has worked with 13 customers to sell their Illinois-grown hops. (FarmWeek photo by Tammie Sloup)

Brian Dallam and Anthony Welty are playing the long game when it comes to their hopyard.

Luckily, the cousins love a challenge.

Since hop farms are relatively new to Illinois, their growing venture that started with an idea in 2016 and led to construction of a 1-acre hopyard in Amboy the following year was a risk.

Especially since the two didn’t know much about growing hops. In fact, when Welty, a homebrewer, posed the idea to Dallam, a lifelong farmer, at an annual party, Dallam replied: “What are hops?”

“I was thinking about the potential in our area for craft beer and the whole ecosystem around that,” Welty said. “And joining the ag industry, …I kind of thought of it from that perspective.”

By spring, they were putting holes in the ground, driving in posts and building the trellis system.

What they deemed “happenstance” led to their unique trellis system and ultimately their business’ name: Live Wire Hops. A local utility company was replacing electrical poles, and knowing they were on a shoestring budget, approached the company about repurposing the old poles. Today, the hopyard is lined with about 60 of those poles supporting about 800 hop plants.

“It was pure frugality and resourcefulness,” Welty said.

As the craft brewing industry continues to grow in Illinois, local hop farms haven’t kept pace. The Pacific Northwest holds 96 percent of the hops market. But as demand for locally grown food has increased, the trend has influenced locally grown hops.

Illinois has about 40 acres of hop farms, but that pales in comparison to Michigan, which has more than 800 acres.

One of the challenges of embarking on producing a specialty crop is the unproven market in Illinois. 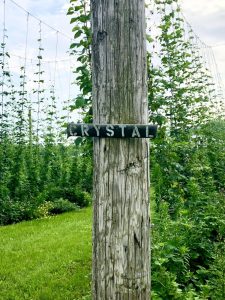 A sign marks the location of the Crystal hops, which are versatile due to low alpha and mild notes of herbal, earthiness, and citrus. The hopyard sits on what was once a cattle pasture and area for 4-H projects. (FarmWeek photo by Tammie Sloup)

“The ones that have seen success are aware of the market and have buyers (lined up),” McCarty said.

Michigan has seen greater success as there was a focus on hops education early on — Michigan State University Extension has been proactive for years with research and guiding a growers association forward.

Dallam and Welty are excited to be a small part of the niche product, even if the venture requires constant TLC.

Dallam refers to the hops growing cycle as a “six-month arm wrestling match.”

“Timing is everything,” Dallam said. “When the hops break dormancy in early April to mid-April to reaching the 18- to 20-foot mark will happen in 50 days.”

“They’re monsters,” Welty said, adding hop plants are the fastest growing plants in the world behind bamboo, growing as much as 6 to 12 vertical inches in a day.

Growers need to be on their game with their nutrient programs, irrigation system and getting the strings put in in time to train the plants.

“Back to the nutrients and fertilizer, everything has to be timed out correctly, and if you’re too slow or too late on something, the plants aren’t going to wait for you, they’re taking off,” Dallam said. “There isn’t a plant on our line of latitude that goes any faster. It’s incredible.”

During harvest in late August, they recruit help to cut the plants down, which entails cutting the plant at the bottom and then cutting the string at the top. 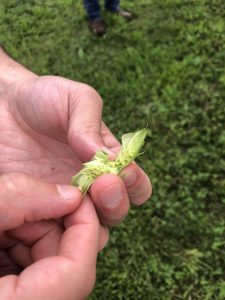 Anthony Welty opens a baby Centennial hop bud at Live Wire Hops in mid-July in Amboy. Dubbed the “Super Cascade,” Centennial hops boast a high alpha content combined with a deep floral and citrus profile. Hops grow around the 45th parallel, and may not yield as well at lower latitudes. Humidity in the Midwest also can lead to increased disease problems. (FarmWeek photo by Tammie Sloup)

The leaves and cones are then stripped off, and the cones, which are picked at 75 percent moisture, have to be dried before Welty and Dallam take them to a Wisconsin plant where they’re turned into pellets. Those are then sold in 4-ounce to 11-pound bags.

The growers are after the cone, in which is a little round green ball stuffed with lupulin — the yellow oily powder that based on its acidity will impart various aromas.

Live Wire Hops has serviced 13 breweries, and while both Dallam and Welty enjoy working the hopyard, marketing their product and working with customers also is an important piece of the business.

“We both really enjoy the sales and marketing end of our business and getting out and meeting new folks and the journey of sharing your story with others and building those relationships,” Welty said. “And the industry is so collaborative and so inclusive and people are just willing to try new things.”

Ranging from notes of citrus and floral to pine and spice, five types of hops are grown on the plot: Mackinac, Cascade, Crystal, Centennial and Chinook. Growing hops in a new region creates new flavor and aroma possibilities. Their Cascade, for instance, has a more piney and resinous character than a Pacific Northwest grown Cascade.

The plants are perennials, with lifespans estimated at 10 to 15 years.