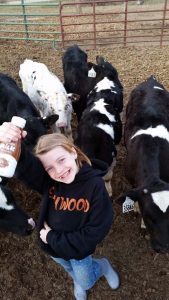 Lexi Windish, a third-grader from Elmwood Elementary School, was the winner of the Peoria County Farm Bureau Ag in the Classroom-Prairie Farms dairy-themed photo contest, held during February.

We have a decidedly national feel to our news coverage, which is normally strictly focused on Illinois farm happenings, this week. But recent developments associated with the new presidential administration concerning agriculture is of importance not only to Illinois farmers and rural dwellers, but to all Americans. We are referring, of course, to proposals President Donald Trump made during his budget address last week affecting the EPA and USDA.

WASHINGTON, D.C. — President Donald Trump’s budget would slash funding to the U.S. Environmental Protection Agency (EPA) by 31 percent and eliminate around 3,200 positions at the agency. The president’s 2018 budget proposal also reduces funding to the U.S. Department of Agriculture (USDA) by 21 percent, to $17.9 billion, according to AgWeb and other media.

“The budget for EPA reflects the success of environmental protection efforts, a focus on core legal requirements, the important role of the states in implementing the nation’s environmental laws, and the president’s priority to ease the burden of unnecessary federal regulations that impose significant costs for workers and consumers without justifiable environmental benefits,” Trump’s proposed budget reads, in part.

Most notably, Trump’s EPA budget proposal would eliminate funding for the Clean Power Plan, international climate change programs, climate change research and other programs. In addition, the EPA Office of Enforcement and Compliance Assurance budget would face a cut of $129 million to $419 million, while funding for the Office of Research and Development would be reduced to $250 million — $233 million below today’s funding level.

There are at least 10 significant impacts to the USDA under Trump’s 2018 budget plan, according to AgWeb’s Ben Potter. They include a $400 million to $500 million reduction to the SNAP program, an unspecified reduction of support for USDA statistical capabilities, and an unspecified reduction in USDA Service Center Agencies county office staffing and operations — instead encouraging private-sector conservation planning. Much of the savings gleaned from these budget cuts would be directed to Trump’s proposal to increase military spending by 10 percent, news sources report.

WASHINGTON, D.C. — House Agriculture Committee Chairman K. Michael Conaway appeared ambivalent regarding President Trump’s proposed budget cuts to the USDA (see prior news item). While praising Trump for his commitment to military spending, Conaway pointed out that farmers and ranchers rely on USDA for essential services and agriculture has already done its share in budget-cut reduction through the 2014 Farm Bill. He also made clear that Trump’s budget proposal was just that — a proposal, and not law.

“On the USDA budget, I am concerned that the cuts, while relatively small in the context of the total federal budget, could hamper some vital work of the Department,” Conaway said in a House Ag press release. “I think it is very important to remember that net farm income is down 50 percent from where it stood just four years ago. America’s farmers and ranchers are struggling, and we need to be careful not to exacerbate these conditions. In fact. We need to do all we can to be there to help our farmers and ranchers.

“I think it is also important to point out that the Agriculture Committee put together a farm bill in 2014 that saved more than $100 billion at latest estimates. That’s more than four times the savings we had pledged. Agriculture has done more than its fair share. As we in Congress get ready to write the budget, we will certainly pay close attention to the President’s recommendations, many of which I suspect will be incorporated into the budget. But, we will also have ideas on what the budget should look like and our priorities will also be taken into account. The bottom line is this is the start of a longer, larger process. It is a proposal, not THE budget.”

WASHINGTON, D.C. — In other farm bill budget-related developments, the House Ag Committee’s Subcommittee on Biotechnology, Horticulture and Research, led by Illinois Rep. Rodney Davis (R-13th), held a meeting to highlight the importance of agricultural research as part of the committee’s hearings on the 2018 Farm Bill. Witnesses stressed the important role research plays in ensuring U.S. agriculture’s global competitiveness, according to a March 16 House Ag press release.

“The public-private partnership in agricultural research has allowed American agriculture to flourish over the last century, supplying our nation with a stable, abundant and affordable food supply while contributing to America’s competitiveness in the global marketplace,” said Davis, a 13th District Republican. “As we begin our work on the next farm bill — and as we look at the future of American agriculture — it is vital that we invest in public agricultural research.”

QUAD CITIES — Osco, Ill. pork producer Gary Asay took exception to a recent Quad Cities newspaper article alleging that antibiotic use in meat production presents a growing human health threat. In a March 12 op/ed posted on QCOnline.com, Asay said oversight of how and when antibiotics are used by pork producers has improved through a collaboration between government, livestock farmers, veterinarians and other groups.

“This year, new FDA regulations went into effect, and American pig farmers were ready. Effective Jan. 1, it became illegal to use medically important antibiotics to promote livestock growth. Today, prevention, control and treatment of disease are the only permitted uses of both water and feed-applied medically important antibiotics; and only with the oversight and direction of a veterinarian,” Asay wrote, in part.

Asay’s letter concluded by advising those interested in learning more about the new FDA regulations to visit www.realchangeonfarms.org