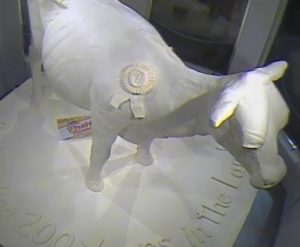 This week’s agricultural and rural newsapalooza is led by word of the inauspicious debut of the beloved “butter cow” at the 2018 Illinois State Fair. We also have details on planned lock and dam closures on the Illinois River slated for 2020, and we’ll tell you which farmer-leaders were elected to leadership positions with the Illinois Soybean executive committee. For these and more items of consideration for Illinois farmers and rural dwellers, please read on …

Butter Cow: To err is human, to forgive bovine …

SPRINGFIELD — The official unveiling of the butter cow at the 2018 Illinois State Fair in Springfield didn’t go as well as organizers had hoped, though dairy building manager Marla Behrends soon had the problem literally smoothed out. The issue arose soon after the Aug. 8 unveiling of the butter-carved bovine revealed a misspelling of the word “bicentennial” on a plaque noting Illinois’ 200th anniversary of statehood. The plaque, also made of butter, would be scraped clean and redone in time for the fair’s official opening the following night, Behrends, of the Midwest Dairy Association, told reporters gathered for the unveiling.

The celebration was attended by Illinois Agriculture Director Raymond Poe, state fair manager Luke Sailer, Miss Illinois County Fair Queen Samantha Hasselbring and state and local dignitaries. “The butter cow is one of the most photographed and most visited attractions of the Illinois State Fair,” Poe stated in advance of the unveiling. “For nearly 100 years, fairgoers have looked forward to this buttery bovine creation. We are extremely proud of our partnership with the Midwest Dairy Association, which allows us to keep this long-standing tradition alive at the Illinois State Fair, and we can’t wait to see what they have in store for this year’s sculpture.”

The Springfield fair runs from Aug. 9-19.

SPRINGFIELD — New Illinois State Fair manager Luke Sailer can be commended for keeping the focus of the state fair where it belongs: on agriculture. In addition to the traditional junior livestock and 4-H exhibitions, agriculture’s presence and influence can be found nearly everywhere on the fairgrounds. An improved Illinois Department of Agriculture pavilion should be the among the first destinations for farm and rural folk. There, Illinois Specialty Growers are serving fair visitors fresh, Illinois-grown food with a different specialty crop highlighted daily. Specialty cooking stage demonstrations will be held throughout the duration of the fair, and visitors can purchase  fresh sweet corn, cantaloupes, peaches, tomatoes, apple cider slushies and more foods made by Specialty Growers members.

In addition, a new exhibit compares modern equipment with their antique counterparts. Agriculture Day was celebrated Aug. 14 at the fair, with festivities including awards presentations occurring in the Orr Building. The governor’s sale of grand champions also was held Aug. 14; we will try to post some of the winners’ names in next week’s RFD News and Views column. (Illinois Farm Bureau news)

A special note to my rural readers this week in lieu of a farm fact: I would love to begin featuring a photo of your family’s small, “country” church, library or school, with a short description of what makes it special in your community, in upcoming columns. If you are interested, please send a digital photo and description to farmrep1@gmail.com for consideration! -Tim

Lock and dam closures set for 2020

BLOOMINGTON — The Illinois Farm Bureau news service reported that the U.S. Army Corps of Engineers is planning to shutter several lock and dam systems on the Illinois River in 2020 for much-needed upgrades. Saying the current gates at the Starved Rock dam and others are “on the verge of failure,” the Corps decided to shut down virtually the entire Illinois River system during the summer of 2020 in order to effect repairs.

Six of the eight locks and dams will be shuttered during the summer. The closures will occur simultaneously between spring flooding and harvest, according to Tom Heinold, chief of operations for the Corps’ Rock Island District. “That’s a pretty narrow window, but we’re going to try to make the negative impact to the navigation industry as small as we can,” he told IFB reporters Deana Stroisch and Dan Grant.

The current horizontal gates at Starved Rock don’t meet current standards and are on the verge of failure, and the La Grange lock and dam requires major rehabilitation to allow for another 25 years of use, Heinold continued: “We are doing these closures up to 120 days. We’ll strive to make it as short of a closure as we possibly can. But the major rehabilitation at La Grange is driving that time range.”

In addition to Starved Rock and La Grange, lock and dam systems at Peoria, Versailles, Morris and Joliet were also tagged for closure and repair, according to the report.

In addition, five district and two at-large directors were elected by the ISA, which has been working to fortify relationships amid trade uncertainty brought on by the recent tariff wars between the U.S. and many of agriculture’s historic trade partners. Recently, the ISA checkoff program hosted a team from the China Food Additives and Ingredients Association, connected with consulate representatives from Mexico, Canada and the European Union, and welcomed a group from Australia, according to the soybean association. Despite the uncertainties, it is good to know that Illinois growers are continuing to build and maintain relationships with key trade partners.