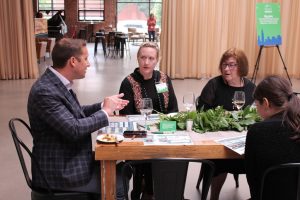 Gus Wigen-Toccalino with West Monroe Partners talks with guests about blockchain technology. On Aug. 7, food industry stakeholders met in Chicago to talk about blockchain, CRISPR and drone technologies and their implications in the food supply chain.

This week’s farm and rural news brief includes details on the record-setting grand champion sale — who bought the beauteous bovines and for how much? We also have an analysis on how badly large corn and soybean harvest could hurt price prospects, along with news of the Illinois Soybean Association’s latest Soy in the City events . Please read on …

SPRINGFIELD — Gov. Bruce Rauner and first lady Diana Rauner bid $60,000 to purchase the grand champion steer exhibited at the Illinois State Fair Governor’s Sale of Champions last week. The sale, which is the marquee event of Agriculture Day at the fair, showcases the hard work and dedication of youth in the agriculture industry.

The grand champion and reserve grand champion exhibitors receive a portion of the proceeds from the sale of their entries, with many using the money toward college education or investing it back into projects for the following year.
“As youth exhibitors are the future of Illinois agriculture, which is our state’s number one industry,” said Raymond Poe, director of the Illinois Department of Agriculture. “As agribusiness continues to grow and evolve, these kids will be educated and qualified to fill the industry needs. At the Department of Ag, we’re encouraging these young leaders to stay involved here in their home state to lead the ag industry.”

The grand champion Land of Lincoln steer was owned by Tara Hummel of Kankakee, and was purchased by BRANDT for $3,000. Each of the grand champion exhibitors took home around $6,000 in scholarships, thanks to donations from the CME Group, Compeer Financial and the Illinois 4-H Foundation. Goats, sheep, barrows and steers involved in the auction were donated to the University of Illinois College of Agricultural, Consumer and Environmental Sciences.

This is the 25th anniversary of the great Mississippi River flood of 1993, considered the eighth-worst natural disaster in terms of dollars. The top six were hurricanes, followed by the 1988 drought and heat wave. (Illinois State Climatologist)

URBANA — The fallout from the larger-than-expected harvest forecast for 2018 corn and soybean crops issued by the United States Department of Agriculture predictably sent harvest futures for corn and soybeans tumbling lower. This was the observation of University of Illinois agricultural economist Todd Hubbs, who said the USDA’s most recent projected yield forecast of 178.4 bushels per acre for corn and 51.6 bu./acre for soybeans came in above trade expectations.

Illinois’ soybean harvest is projected at 64 bu./acre, up six bushels from the final 2017 Illinois yield. The U.S. average soybean yield forecast of 51.6 bushels for 2018 was two bushels larger than trade expectations.

Increased soybean stocks led to an increase in the export forecast for the 2018-19 marketing year of 20 million bushels, however, reflecting recent strength in soybean exports. However, the forecast for the marketing-year average market price decreased by 35 cents to a range of $7.65 to $10.15 per bushel. Where that price ends up is largely dependent on developments in trade issues over the next year, according to Hubbs.

Discussion and graphs associated with Hubbs’ article can be found at www.youtu.be/x/YirAckZyo8.

Talking tech and food: Soy in the City

CHICAGO — Illinois Soybean Association farmer-leaders met with business and technology consultants in Chicago Aug. 16 to discuss how technology can help the state’s soybean industry grow more efficient and sustainable. On the table: food production benefits from technology applications like autonomous driving and GPS field mapping. The meeting also included discussion of up and coming technologies with a potential major impact on agriculture, including blockchain, CRISPR and drones.

“The world is changing, and producers must stay ahead of the technology curve,” remarked Stan Born, ISA director and soybean grower from Lovington. “There’s still more to learn, and meeting with other value chain stakeholders allows us to understand the full picture of where our industry is headed and what we can do to ensure producers thrive through change.”

New technological advances are providing an exciting and opportune opportunity for agricultural producers, according to ISA director of industry relations Jayma Appleby. “Populations are rising, consumer preferences are changing and we’re in the midst of a major tech movement,” she said. “It’s important we continue connecting on how we can encourage and apply technology on the farm, but also along the entire supply chain. The future requires it.”

Chad Colby, ag technologist and Colby Ag Tech founder who attended the event, said producers are using technology today that they hadn’t considered would exist just a few short years ago. “The tech boom we’re in will provide countless solutions to more efficient, transparent, sustainable production,” he said. The get-together at the Chicago ISA office was part of the association’s ongoing “Soy in the City” initiative. (ISA news)