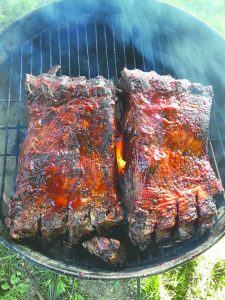 Surveys show that as Covid19 cases resurge, consumers are returning to their kitchens and grills. Share your summer grilling recipes and photos using #NationalGrillingDay. (Photo by Tim Alexander)

Strong winds, hail and thunderstorms did some damage to Illinois crops last week to top the week’s farm and rural news cycle. Will this increase prevent planting claims? We also have news about the success of Illinois’ adult-use cannabis program, administered by the Agriculture Department, after its initial six months. In addition, more funds and services are becoming available to producers under federal COVID-19 relief programs. For details, please read on …

BLOOMINGTON — While I was driving along Illinois Route 251 between El Paso and Kappa in eastern Woodford County last week, the crop damage from the prior week’s hail, thunderstorms and high winds was evident on entry rows of near-mature corn fields by the Grainland Cooperative. The nearly flattened rows of corn were just a snapshot of the damage that was inflicted on many crop fields across central Illinois, reported area COUNTRY Financial crop operations manager Brad Clow.

Clow told the Illinois Farm Bureau news service that a significant spike in crop insurance claims came in following the storms, which generated wind speeds of up to 80 mph across central and northwest Illinois during the second week of July. Extensive crop damage was reported around the Gridley area in McLean County, while up to 9 inches of rain was recorded in Tazewell County.

“The good part is we suspect a lot of the corn (flattened by high winds) could come out of it. We didn’t recognize a lot of green snap. We’re crossing our fingers, and I’m sure a lot of farmers are, too,” Clow said.

SPRINGFIELD — Like it or not, Illinois’ inaugural adult-use cannabis program is a smoking-hot success. Administered by the Illinois Department of Agriculture, $52 million in adult-use cannabis tax revenue has been collected, of which $34.7 million came from cannabis excise taxes and the rest from sales taxes. A portion of every dollar is shared between local governments, though some $25.9 million is headed for the state’s general fund.

According to Toi Hutchison, senior adviser to the governor for cannabis control, a portion of the money from the adult-use cannabis program is being funneled back into poorer communities that may have suffered inequitably from the war on drugs, including cannabis. “I’m proud to work with Governor Pritzker in creating equity in the cannabis industry in a way that no other state has done,” Hutchison said in a July 14 news release announcing the six-month revenue totals.

Pritzker’s budget initially estimated that just $22 million in purchaser excise taxes would be collected during the final six months of fiscal 2020. Illinoisans purchased more than $47 million in cannabis under the state’s program in June, according to the IDOA.

WASHINGTON, D.C. — USDA Secretary Sonny Perdue announced that growers of additional commodities will be eligible for payments under the Coronavirus Food Assistance Program. The additional commodities include select varieties of lettuce, along with beets, kale greens and herbs, including chives, oregano and thyme. “When we announced this program earlier this year, we asked for public input and received a good response. After reviewing the comments received and analyzing our USDA Market News data, we are adding new commodities, as well as making updates to the program for existing eligible commodities,” Perdue said on July 14. CFAP applications are available through Aug. 28 at county Farm Service Agency offices.

Also on July 14, American Farm Bureau Federation President Zippy Duvall sent a letter to the Senate Small Business and Entrepreneurship Committee, chaired by Marco Rubio, R-Fla., asking Senate lawmakers to make several changes to the Paycheck Protection Program. “While the PPP is providing vital assistance to farmers and ranchers who were able to receive loans, more funding is needed to support those shut out of the program and significant changes are necessary for agricultural producers to participate in the PPP,” according to Perdue.

At issue: data from the Small Business Association that shows only 1.5 percent of PPP loans were distributed to the agriculture, forestry, fishing and hunting subsector. The AFBF maintains that due to the lateness of SBA’s clarification of farm and ranch eligibility and other issues, agricultural producers were disadvantaged when it came to securing their proper share of the funding.

DES MOINES, Iowa — Studies supported by the National Pork Board and pork checkoff program indicate that as COVID-19 cases are in a resurgence around the country, consumers are returning to their kitchens to prepare more meals. Mentions of “cooking at home” on social media are up 50 percent from June 2, when many states began allowing restaurants to reopen. NPB’s Bill Even noted in the July 17 Pork Checkoff Weekly Update that if 70 percent of consumers prepare 80 percent of their meals at home, projected pork sales “look strong” at around $550 million per month.

BATH — Last year it was due to flooding; this year, it’s COVID-19. Either way, the state’s most renowned “anti-invasive species protest” has been canceled again. Set for the first weekend in August, the 2020 Redneck Fishing Tournament in Bath would have drawn hundreds of fishermen (and others) to the Mason County town along the Illinois River. The hosts admitted that pulling the plug on the popular event, which nets tons of the invasive Asian carp from the river, was the prudent thing to do.

“We hate to have to do it, but there’s so much uncertainty. It’s best to play it safe,” said Betty DeFord, who started the tournament more than a dozen years ago. “Plus, there’s no way we were ever going to get all those fish to wear masks or social distance.”

While the tournament is conducted in good fun and with plenty of adult beverages available, those who participate are responsible for removing (via nets; no fishing poles are allowed) thousands of the carp, which crowd out and threaten gamefish species, from the waterway. DeFord says she plans to host the event again in August 2021.