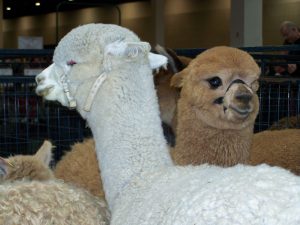 More than 800 alpacas of all colors and varieties took up residence in the Peoria Civic Center during the National Alpaca Show, held March 23-25. Next year, the show moves to Denver. (Tim Alexander photo)

This week’s column is dominated by government news releases, including Illinois prospective plantings and grain stocks reports and issuances from the state agriculture department on dicamba training and the state fair. For these and more news items of interest to Illinois farmers and rural dwellers, please read on …

SPRINGFIELD — Released March 29 by the USDA-NASS Heartland Regional Field Office, the Illinois Prospective Plantings report indicates that the state’s farmers will plant substantially fewer acres of corn without an increase in soybean acreage in 2018. The news, which was reflected in the national prospective plantings report, caused a brief rally in prices, most notably in the soybean market.

According to their stated intentions corn growers in Illinois plan to plant 11 million acres in 2018, down 2 percent from 2017. Soybean planted area is expected to total 10.6 million acres in Illinois, unchanged from last year. Nationally, however, both corn and soybean acreage planting intentions are down. The USDA dropped its original estimate of 90 million acres of both corn and soybeans to 88 million corn acres and 89 million soybean acres. According to Jim McCormick of Allendale, Inc., corn acreage was expected to slide, but soybean acreage was not. More farmers will instead plant wheat, McCormick said during a Farm Journal Facebook live segment last week.

“Doing the math really quick, farmers in the northern part of the country said, ‘We’re going to plant that spring wheat — it’s a better deal than beans,’ and it came at the expense of beans. It shocked the market,” he said, adding that the soybean rally would be short-lived, in his opinion.

Also in Illinois, farmers indicated they would plant 29 percent more sorghum in 2018 than in 2017, bringing the total declared sorghum acreage up to 22,000.

Grain stocks up in Illinois

Nationwide soybean stock is estimated at 2.11 billion bushels following a disappointing marketing quarter for the crop. This was up by a whopping 21 percent from March 2017 and at the high end of pre-report analyst estimates, DTN staff reporters observed. Analysts blame the large grain surpluses and low commodity prices for losses in acreage estimates for both corn and soybeans heading into planting season.

SPRINGFIELD — Nearly 11,000 pesticide applicators had attended training to understand the new requirements for applying dicamba to genetically modified soybeans by the end of March, according to the Illinois Department of Agriculture. The final classroom training opportunity was held March 28 in Rockford, said Doug Owens, IDOA bureau chief of environmental programs.

“We are very pleased with the turnout of pesticide applicators for the classroom training programs; the fact that nearly 11,000 agricultural pesticide applicators attended a class is remarkable and demonstrates their desire to learn how to better manage this herbicide to mitigate off-target movement,” Owens stated in an IDOA news release. “Not all pesticide applicators will use dicamba on soybeans, and we also know that many landowners and others in the ag industry attended to learn more about the stewardship of this product.”

For those who couldn’t attend any of the classes offered throughout the state last winter, IDOA will allow applicators to use online modules to meet the certification requirement. Links to modules developed by BASF, Monsanto and Dow-DuPont can be accessed through the Illinois Dicamba Training website.

Of more than 400 complaints received by the IDOA in 2017, more than half concerned alleged off-target applications of dicamba resulting in crop damage or loss to non-GMO crops, according to a department spokesperson.

Ag leader sought for ‘Illinoisan of the day’

SPRINGFIELD — Do you know a leader in the agricultural field who exemplifies the characteristics associated with Illinois, such as integrity, dependability, sense of community or strong ethics? The Illinoisan of the Day project is looking to honor individuals with an affiliation to agricultural groups, state or county fairs or youth programs such as 4-H to recognize during the 2018 Illinois State Fair (Aug. 9-19 in Springfield).

The program, directed by the Illinois State Fair Museum Foundation, is seeking nominees that are at least 25 years of age with a history of volunteerism and community service. Illinoisans of the Day winners will receive honors on their special day at the fair. Nomination forms can be requested by calling the foundation at 217-725-8047 or by visiting the museum website. (AGR Communications)

Alpacas produce between five and ten pounds of fleece per year when sheared. (Alpaca Owners Association)

PEORIA — More than 830 Huacaya and Suri alpacas from some 165 farms called the Peoria Civic Center home from March 23-25 during the Alpaca Owners Association National Alpaca Show. AOA executive director Bud Synhorst called the even a “huge success” and praised the people of central Illinois for their attendance, support and enthusiasm for the event, during which eight grand national champions were crowned.

Members of the camelid family, alpacas originated in South America before being introduced in the U.S. in 1984. Synhorst said the biggest differences between alpacas and their llama cousins are size — a llama can grow to 400 pounds, more than twice the weight of an alpaca — and fiber quality. Alpaca fleece is soft like cashmere and stronger than wool, he said, making their fleece more valuable.