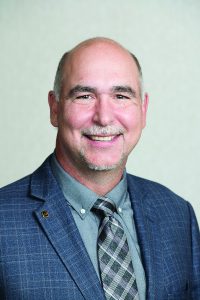 Mark Wilson, a Toulon (Stark County) farmer, will be entering his ninth and final year as Illinois Corn Marketing Board chairman. He is also a board member on the U.S. Grains Council. (Illinois Corn photo)

A pair of bills introduced by Illinois lawmakers could severely impact how farmers can use insecticides and herbicides; we have details. Please keep reading for important details on this development, and other news for Illinois farmers and rural dwellers …

SPRINGFIELD — A bill sponsored by State Rep. Anna Moeller, D-Elgin, would ban the purchase and usage of dicamba-containing herbicides in Illinois crop fields. The bill’s introduction was something many in agriculture had been anticipating following the EPA’s recent “death knell” report on 2021 dicamba complaints and will certainly be replicated in soybean producing states across the country.

Moeller’s HB 4363 states “that on and after Jan. 1, 2023, no person or entity may use any product containing dicamba for agricultural, commercial, or residential use within the State.” The measure provides that the amendatory provisions do not apply to the use of dicamba that is purchased before the bill’s effective date.

In addition, another bill introduced would ban from state properties insecticides that have been blamed, in part, for declining bee populations. HB 4558, sponsored by Rep. Will Guzzardi, D-Chicago, states “on and after Jan. 1, 2023, no pesticide containing a neonicotinoid may be used outdoors on any land owned or maintained by the State, except for use in structural pest control or abatement of non-native insect borers, subject to specified restrictions.” The bill would classify any neonicotinoid pesticide a restricted use product, implying that licensed applicators might be allowed to utilize neonicotinoids on farm fields.

First marketed in the 1990s, neonicotinoids are a class of synthetic insecticides that are the most widely applied pesticides used by U.S. farmers today. The U.S. EPA canceled 12 neonicotinoid products in 2019 and is currently reviewing registrations. Neonicotinoids are used in more than 120 countries and have 140 different crop uses, according to Cornell University.

In an action alert to members, Illinois Fertilizer and Chemical Association President Kevin Johnson opposed both pieces of legislation. “IFCA believes that any ban on any pesticide or making a pesticide a restricted use product should only be addressed by USEPA, not the Illinois General Assembly for political reasons,” Johnson stated.

WOTUS to be heard by SCOTUS

WASHINGTON, D.C. — In what may be a win for the agriculture industry, the Supreme Court of the United States has agreed to hear arguments against the Biden administration’s EPA rewrite of the Waters of the United States rule. The bulk of the discrepancy lies within what differentiates a “water of the U.S.” from a private or residential body of water, and its relation to on-farm crop nutrient management.

American Farm Bureau Federation President Zippy Duvall was quick to express gratitude for the high court’s decision. “AFBF is pleased that the Supreme Court has agreed to take up the important issue of what constitutes ‘Waters of the U.S.’ under the Clean Water Act. Farmers and ranchers share the goal of protecting the resources they’re entrusted with, but they shouldn’t need a team of lawyers to farm their land. We hope this case will bring more clarity to water regulations,” Duvall said, in a prepared statement.

“In light of today’s decision, we call on EPA to push pause on its plan to write a new WOTUS rule until it has more guidance on which waters fall under federal jurisdiction. For the past 10 years, Farm Bureau has led the charge on elevating the issue of government overreach in water regulations. The goal is simple, clean water and clear rules.”

TOULON — Illinois Corn Marketing Board Chairman Mark Wilson has raised grains and fed out a few cattle on his Stark County farm for decades. He’s been involved in local farm bureau and pork producer organizations for most of his adult life. Wilson took his next step up the leadership ladder at the recommendation of Jim Tarmann, managing director for Illinois Corn, when Tarmann was a feed salesman in Wilson’s crop District 4 territory. It was Tarmann who recommended Wilson stand for a nine-year term on the ICMB. The recommendation changed Wilson’s life in many positive ways, the Toulon farmer told this columnist during a recent phone call.

“I thought this would be a great opportunity to represent corn and do something more for agriculture. I feel it’s very important to give back, because I think agriculture is probably the best industry there is,” said Wilson. “We’re important because we feed people, we feed animals that feed people, and now create clean fuel that cleans the air. What better field to be in than something that’s vital for the survival of humankind?”

As he approaches his ninth and final year of ICMB stewardship, Wilson is looking back proudly on his association with fellow farmer-leaders on the board and in the fields. “There are not a lot of egos involved; it’s all about promoting corn,” he said. “I feel real proud about what we do. I’m a strong Christian, and I believe we have a real connection with God. We depend on God for what we raise, and what we can do to affect our yield is very little, comparatively.”

As his turn with the ICMB comes to a close, Wilson is beginning a new chapter as a member of the U.S. Grains Council board of directors representing the corn sector. USGC board member terms run for two years with an option to stand for reelection. Congratulations Mark!

URBANA — Public meetings in central Illinois have recently been held to discuss the logistics of transporting carbon dioxide through 1,300 miles of underground pipeline to a destination deep underground in Illinois. Known as carbon capture, the process would force CO2 underground through 12 Illinois counties before its ultimate capture in deeply embedded rock.

The feasibility of the project was tested by researchers and engineers working with Archer Daniels Midland, who closely monitored the capture, injection and observation of industrially produced CO2 at the company’s Decatur site. In the ADM operation, carbon dioxide is captured and compressed before the water is removed. The water then enters the pipeline at an injection well on the surface, before being pumped and injected into the sandstone. The process passed safety tests, according to Duane Friend, University of Illinois Extension natural resources and energy educator.

“This procedure should be considered just one of many options to reduce atmospheric CO2 emissions, which adds 35 billion metric tons of carbon dioxide to Earth’s atmosphere each year,” said Friend. (U of I Extension)

The interim goal of Illinois Nutrient Loss Reduction Strategy is to reduce phosphorus losses by 25 percent before 2025.