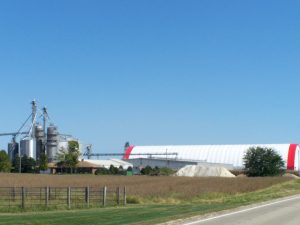 Old crop soybeans in storage are up 124 percent over last year, according to the USDA, which, along with anticipated record soybean and corn crops, is putting grain storage facilities such as this one near Edelstein in Peoria County in hot demand. (Tim Alexander photo)

This week’s roundup of Illinois farm and rural news is led by the U.S. Agriculture Coalition, and Illinois soybean farmers, meeting with the new leader of Cuba to discuss trade relations last week in New York City. Closer to home, we have the latest Illinois agricultural price, grain stock and crop condition reports; we’ll highlight the results. Also, with the clock ticking on passage of a new farm bill — and its critical protections for farmers — at press time, those in agriculture are on high alert. Please read on …

NEW YORK CITY — Members of the U.S. Agriculture Coalition for Cuba, the Illinois-Cuba Working Group and Illinois Soybean Growers met with Cuba’s President Miguel Diaz-Canel on Sept. 27 during the United Nations General Assembly meeting in New York. According to Paul Johnson, USACC chair and ICWG director, the participants shared discussion on a range of issues including improving relations between the two nations, agricultural trade and investment, and working together to define the goals of a U.S.-Cuba agricultural relationship.

“We need another approach with Cuba that is dynamic and thoughtful,” said Johnson, who has worked to improve Illinois’ agricultural relationship with Cuba for decades. “Throughout history agriculture has served as a bridge to foster cooperation, understanding, and the exchange of ideas among people. We need to allow agricultural trade between both countries help rebuild our relationship literally from the ground up.”

Mark Albertson, ISG director of strategic development, was able to meet with Diaz-Canel during the Cuban leader’s first diplomatic visit to the United States. “We have been working on opening doors with Cuba since 2012 and value the opportunities trade with Cuba brings to our soybean producers. We continue to believe that the improvement of economic conditions and trade relations between the U.S. and Cuba is the foundation for future success,” said Albertson. “As Illinois soybean producers struggle to make ends meet with lower commodity prices and decreased access to key markets, it’s important that we maintain positive relationships with Cuba and other countries who import our soybeans.”

ISG members have traveled to Cuba to meet with government officials and business leaders to exchange ideas for improving relations 12 times since 2012, according to Albertson, who resides in central Illinois. “ISG’s leadership at both the state level and the national level helped lead to the formation of the ICWG and the USACC. Our goal is fostering two-way trade between our countries, which are just 90 miles apart,” he said.

Efforts to lift the American embargo on Cuban trade, now in its sixth decade, increased under the Barack Obama administration, but have not been pursued by President Donald Trump’s administration. (USACC, ISG news)

SPRINGFIELD — There is good reason for Illinois soybean and other agricultural producers to be vigorously pursuing new export markets, such as Cuba, for trade relationships. The August Prices Received Index for Illinois agricultural production, at 89.5, decreased 2.2 percent from July. This was largely due to a 6.4 percent dip in the Livestock Production Index, which fell to 89.3. Compared with a year earlier, the Prices Received Index is down 4.9 percent, according to the Sept. 27 USDA-National Agricultural Statistics Service Illinois Agricultural Prices report.

Meanwhile, it looks as if Illinois producers are heading toward record corn and soybean yields, based on USDA production estimates and the Sept. 24 Illinois Crop Progress and Condition report, which rates corn condition as 47 percent good and 32 percent excellent, and soybean condition as 48 percent good and 31 percent excellent. USDA-NASS estimated the Illinois corn harvest at 28 percent complete and the soybean harvest at 17 percent complete.

What about the farm bill?

Failing to reach an agreement, the 2014 Farm Bill authorization expired Sept. 30 without an extension by Congress.

Major programs covered by the Farm Bill, such as crop insurance and Supplemental Nutrition Assistance Program, formerly known as the food stamp program, will continue as they are permanently authorized in other laws or  appropriations.

The bill is locked in a partisan showdown over the SNAP component of the bill. As of last weekend, farmers have been operating under no farm policy, unless Congress united to extend the bill after this column was put to bed. The lack of an extension means none of the programs for farmers under the farm bill are currently funded.

An important trade program left unfunded, the Foreign Market Development Program, is a program Illinois corn farmers should be concerned about losing, according to Rodney Weinzierl, Illinois Corn executive director. His comments on the impacts of losing the program and how to fix the problem are featured on the Illinois Corn Growers Association website www.ilcorn.com.

CNBC reported on Sept. 30 the farm bill would likely be taken up by a lame duck session of Congress after the November midterm elections.

CHAMPAIGN — The Illinois Natural Resources Conservation Service has announced a Nov. 2 deadline for farmers and forestry producers to submit Conservation Activity Plans for the NRCS Environmental Quality Incentives Program. The conservation program offers technical help and financial payments to install practices designed to reduce erosion and protect water quality. “EQIP provides funds to pay for the creation of a CAP that addresses a specific natural resource concern or a particular land use issue,” said Ivan Dozier, Illinois state conservationist, in an Illinois-NRCS release. Contact your local NRCS field office for more information, or submit your CAP through the NRCS website “Conservation Client Gateway.”