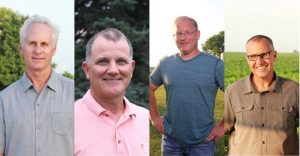 Although the legislation expired on Sept. 30 without a continuation, Illinois Congressman Rodney Davis said he is hopeful a new farm bill can be passed immediately after the November elections. Also this week: October is National Pork Month, and we have several items of interest to pork producers. Finally, just how wet was it in September? We have the month-end statistics. For the latest news for Illinois farmers and rural dwellers, please read on …

BLOOMINGTON — Appearing on the RFD Radio last week, Illinois Rep. Rodney Davis, who is also on the House Committee on Agriculture, said he is optimistic a new farm bill will be passed by a lame-duck session of Congress shortly after the November midterm elections. The Illinois Republican’s comments came just days after House and Senate farm bill committees failed to finalize a conference draft for a new bill or extend the 2014 Farm Bill following its Sept. 30 expiration.

“(House Ag Committee) Chairman Conaway is willing to meet any day in October, any day in November and even on election day if that is the day we can sign a conference report. We could come back a week after the election and be able pass a farm bill — I think it’s crucial,” Davis said. “The good news is that the expiration is not going to affect our farmers. Any of them who are using crop insurance programs or other risk management programs like ARC or PLC aren’t going to see any changes.”

An extension is not an option that is being considered by Conaway at this time, Davis continued, though he admits that failure to pass a bill by the end of the current Congress would be bad for farmers and consumers. “We absolutely don’t want to be in that spot. I want to get it done, and so does the chairman,” he said. “There are some who I serve with who believe that if they are in the majority they wouldn’t mind writing their own farm bill. It would require an extension to write a new farm bill. I would like to see us come together before the election as a conference committee and then pass it immediately after the election as a lame duck Congress, and I would like to see it done on a bipartisan basis.”

SPRINGFIELD — October, traditionally a time when hogs were marketed, is October Pork Month in the United States. It serves as a time when pork producers are encouraged to share their stories with consumers, while consumers pledge to buy and eat extra pork to support their local pig farmers. The Illinois Pork Producers Association is asking Illinois residents to make a pledge to support the state’s pig farmers, said Mike Haag, IPPA president and an Emington pork producer.

“If you eat, you have a connection to a farmer,” according to Haag. “October Pork Month is an opportunity to refresh the connection consumers have with farmers. Our mission is to produce safe, nutritious food in a responsible manner for families across the United States and around the world.”

Changes is feeding and breeding techniques have allowed today’s pork producers to respond to consumer demand for leaner pork cuts. Pork tenderloin is certified as heart-healthy by the American Heart Association, indicating the product contains less than 6.5 grams of fat and 1 gram or less of saturated fat. To celebrate pork month in Illinois, in-store promotions are in place in 18 Hy-Vee stores across the state. In addition, 42 County Market stores are participating in a healthy eating campaign spotlighting pork.

URBANA — In 2018, Illinois pork producers have extra incentive to appreciate consumers purchasing extra pork in honor of October Pork Month: though prospects have improved, losses still loom. This is according to Purdue University farm economist Chris Hurt, who said fear of large pork supplies and looming tariffs made for a bleak outlook in August.

“At that time, my forecast was for losses of $40 or more per head in the fall and winter, the worst since 1998. The outlook is still suggesting losses this fall and winter but much less than in August,” Hurt said in an essay circulated by the University of Illinois College of ACES on Oct. 2. The economist cited the steady increase in breeding herd numbers since the PED virus depleted the U.S. supply in 2014 as a prime contributor to today’s low prices. In addition, tariffs imposed this year on U.S. pork exports by some of the industry’s most valued trade partners helped push prices down.

“The magnitude of the price drop was huge,” Hurt said. “December lean hog futures fell from about $60 in June to $44 by early August. The good news is that prices have recovered most of the decline, raising back to $58 by Sept. 28.” Hurt’s entire essay can be viewed at www.aces.illinois.edu.

Illinois man is pork producer of the year

ARROWSMITH — Pat Bane of Arrowsmith has been crowned Pig Farmer of the Year by the National Pork Board’s pork checkoff program. After a third-party audit of his on-farm practices and taking part in a series of written and oral interviews, Bane was found to have achieved excellence in aspects of pig farming including animal care, environmental stewardship, employee work environment and outstanding community service. Congratulations Pat Bane!

URBANA — Illinois experienced above-normal temperatures and rainfall during September, according to Illinois state climatologist Jim Angel. The statewide temperature was 70 degrees, 3.8 degrees above average and the 12th warmest on record. “We were on track to one of the warmest Septembers on record until the last cold snap,” Angel noted. The statewide average rainfall for September was 4.97 inches, 1.74 inches above normal and the 19th wettest September on record. (Illinois State Water Survey)