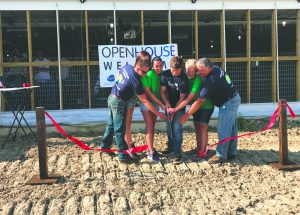 The Kuberski family members (from left) Zach, Mara, Desiree, Josh, Christina and Paul, cuts a ribbon to signify the completion of their new pig barn, that will hold 2,480 pigs in the near future. (Illinois Pork Producers Association photo)

In this week’s farm and rural news headlines, USDA acreage surprises drove corn prices higher — but will it last? Also in this week’s column: a look at crop conditions, Governor Pritzker’s Progressive Tax Amendment, and how farmer-leaders are taking farming online in the age of COVID-19. For more, please read on …

URBANA — About a year ago, farmers were aghast when USDA added thousands of acres to their corn crop yield projections, plunging prices further into the abyss. A year later, the agriculture department apparently decided that its June 30 Acreage and Grain Stocks report needed a little jolt, so it proved that what the USDA can take away, the USDA can giveth — in the form of lower corn production estimates in the major producing states.

“The drop in acreage spurred a rally in corn prices and injected some optimism into the corn outlook moving into the 2020 marketing year,” observed Todd Hubbs, University of Illinois agricultural economist, of market reaction to the 4.98 million-acre reduction in projected US corn yield, compared with the March USDA Planting Intentions survey of farmers.

“The 5 million acres drop in corn acres did not move into the other principal crops and hints at expanded prevent plant acreage for corn this year,” Hubbs added. “The surprise in corn planted acreage led to a strong rally in corn prices. The market’s focus now turns to demand and weather.”

By the afternoon of July 10, corn prices had receded from above $3.50 per bushel during the price rally to around $3.44. (U of I College of ACES Weekly Outlook)

SPRINGFIELD — With corn condition in Illinois rated 61 percent either good (48) or excellent (13), crop progress is well ahead of 2019’s pace, when just 32 percent was considered good and 5 percent excellent by July 5. However, corn at silk stage was estimated at just 10 percent compared to the five-year average of 28 percent, according to the USDA’s July 6, 2020 Illinois Crop Progress and Condition report.

Rod Wenzierl of the Illinois Corn Growers Association told this reporter that on his farm in western McLean County, corn is behind growth pace due to little rain finding its way to his area.

“Our crops have been under moisture stress, and we have not had a good rain since mid-May,” Weinzierl said on June 10, a day before a large, damaging storm system headed toward central Illinois. “We had a half-inch in mid-June through three different rains over two days, and a little over a half inch last night, which was close to the biggest rain we’ve had over the last eight to nine weeks. A half inch doesn’t go far, but a couple of inches would have been nice going into the 90 degree weather. Hopefully the rain projected for this weekend brings a couple of inches to whoever needs it, because a lot of crops here in central Illinois are under moisture stress.”

Saturday night’s rain and lightning storms disrupted power to more than 20,000 Peoria-area residents and deposited just under 2 inches of rain in the Farm Credit rain gauge of this Chillicothe-based reporter, who was forced to compose this column on laptop battery power using window light on Sunday morning, after remaining without power to our home for more than 12 hours.

“After seven years of a depressed economy, we don’t need another tax increase,” Guebert told FarmWeek, the IFB news publication. “It’s hard enough to keep the bills paid and be as profitable as possible.”

Currently, all Illinois wage earners pay a flat 4.95 percent income tax rate, regardless of their gross earnings. Though Pritzker’s graduated tax rate plan is designed to increase funding available for schools, roads and other public needs, Guebert questioned whether this would be accurate and where any extra money might ultimately end up. Citing state pension funding and the state’s mounting debt load, the IFB president said there would be no money left over for “schools, public services and public safety or to provide property tax relief.”

“Instead of driving five, six or seven hours, you could jump on a Zoom meeting. It’s a tool to add to our program,” Nourie said.

SPRINGFIELD — The Kuberski family, which has been farming in Perry County for six generations, has added a 2,480-head pig barn to grow their family further into the livestock industry. At a time when pig barns can draw protests, vandals and intruders, Josh Kuberski said he is proud to add pigs to his family’s farm.

“After we graduated college, I was able to farm full time. I have been around animals my entire life, and always enjoy receiving new life onto the farm,” he said, adding that the family plans to use pig manure to help fertilize some of the neighboring land. The Kuberski family is partnering with The Maschhoffs to help secure a future for their family farm. (IPPA news)