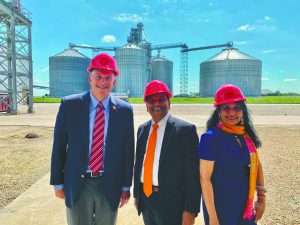 In this week’s farm and rural news roundup, we have news about the Brazil-U.S. trade dispute over ethanol tariffs, Illinois Soybean Association leadership transitions, cover crop efficiency and more. Please read on …

PEORIA — U.S. Representative Darin LaHood of Peoria assured his constituents in the ethanol industry that as American and Brazilian negotiators work to resolve a longstanding trade dispute over ethanol, lawmakers are pressing for a resolution that eliminates Brazilian tariffs.

“Illinois is an ethanol leader, and our producers would greatly benefit from an equitable trade relationship with Brazil. That’s why I led an effort urging USTR to prioritize eliminating Brazilian trade barriers that target U.S. ethanol in ongoing trade negotiations,” LaHood stated.

As ethanol demand remains below normal levels due to less gasoline being used by American motorists during the COVID-19 pandemic, Global Impact Innovation and Big River Resources in Galva began making hand sanitizer in March. Using an 80 percent ethanol “recipe,” the company found a way to utilize unused ethanol to help fill the market gap. LaHood recently visited the company for a tour and photo op.

“The innovation is a win on several levels,” LaHood said. “The company hired 20 additional people in the area, exemplifies [sic] our national goal to bring back production of PPE from China, and provides an additional market for our midwestern-made ethanol. My office was happy to assist in the permitting process and we are grateful for the investment in central Illinois!” (LaHood office news release)

BLOOMINGTON — The Illinois Soybean Association announced the promotion of several employees and the creation of a new 501(c)(3) foundation. Brian Hansen, who has been serving as the organization’s Chief Financial Officer, will now add Chief Operating Officer to his title. Hansen has more than 18 years of experience in association management and will be helping to direct the day-to-day organizational needs at ISA.

Mike Levin is being promoted to Senior Director of Government Affairs, while Andrew Larson has been promoted to Director of Public Policy and Market Development. The pair will lead the association’s advocacy and membership efforts, along with Larson’s direction on efforts related to soybean demand and trade.

Rachel Peabody has been promoted to Director of Communications. She will direct the internal and external communications efforts, along with all marketing and branding programs for the association. She will also serve as editor-in-chief of the newly re-launched Illinois Field & Bean magazine.

Amy Roady is moving into the newly created Director of Outreach role. In this capacity, Roady will oversee the development of the Illinois Soybean Association Foundation. This effort will allow for ISA to extend their outreach to special initiatives, scholarship programs and endowments to enhance the future of Illinois soybean production.

“ISA has a talented team in place with industry skill sets that position the organization well for future success and growth. These promotions and title changes reflect the leadership and work ethic of the team, as well as their commitment to the 43,000 Illinois soybean farmers we serve,” says CEO John Lumpe. “It’s also incredibly exciting to launch the new foundation arm of our organization. This will position ISA to better serve farmers and their communities on all fronts and allow us to make checkoff investments go even further.” (ISA news release)

WEST LAFAYETTE, Ind. — Illinois farmers who responded to a recent midwestern state survey said that cover crops improved their yields while lowering input costs. This is according to the Conservation Technology Information Center, which recently announced the results of their seventh annual cover crop survey. Participants planted an average of 465 acres of cover crops in 2019, which represents a 38 percent increase over the past four years.

“Farmers are using cover crops for a variety of reasons, and many have tried new approaches to cover cropping,” reported Mike Smith, CITC survey manager.

BLOOMINGTON — For the first time, the annual meeting of the Illinois Farm Bureau will not be an in-person gathering. Rather, the IFB will join the growing trend of hosting large gatherings in a virtual setting. The change was made in conjunction with the state’s Phase 4 guidelines, which limits gatherings to 50 people or less.
“We would rather meet in person, but given the circumstances, this is the right approach,” said Rich Guebert Jr., IFB president. “I’m confident we can use the virtual format to effectively handle the business of our organization.”

The agenda for the Dec. 5 virtual meeting has not yet been released. In addition to Guebert’s annual address, it is known that the meeting will also allow delegates to review and approve annual policy matters. Further details will be released as the event draws nearer, the IFB news service reported.

The majority of Illinois farmers pay between $11 and $15 per acre for cover crops of all varieties, with price-per-acre topping out at more than $26 per acre. (Conservation Technology Information Center)