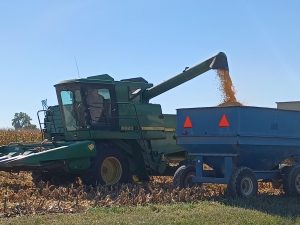 A farmer empties his combine of corn near Deer Creek in Tazewell County on Sept. 30. As of Oct. 11, the Illinois corn harvest was 27 percent completed, according to the USDA. (Photo by Tim Alexander)

This week we have news on low water levels continuing to affect barge movements, a look at exactly how much fertilizer prices have increased and more. Please read on …

ST. LOUIS — Though river-depth levels are generally adequate on the upper Mississippi and Illinois rivers, low water levels at and below St. Louis are continuing to negatively impact soybean movements by barge.

The respected farm economist said that storing recently harvested grain rather than selling it could be “a reasonable thing to do,” though “there’s no guarantee that it’s going to rain more and that you’ll get the river back up to more normal levels.”

Mike Steenhoek, executive director of the Soy Transportation Coalition, agreed with Irwin’s assessment. “We are seeing this phenomenon on vivid display due to the current conditions along the inland waterway system,” Steenhoek said. “In essence, if a barge-loading facility along the river is less able to move bushels of soybeans or grain out their back door — due to less efficient barge transportation — the facility will be less able to accept bushels via their front door. The barge-loading facility will often respond to such a scenario by decreasing the price offered to farmers (i.e. “having a more negative basis”) in order to mitigate deliveries to their location.”

BLOOMINGTON — Seven Illinois Farm Bureau county offices are among the winners elected for the American Farm Bureau Federation’s annual County Activity of Excellence awards. According to an AFBF news release, 143 entries across all membership categories were received, marking this as one of their most competitive years. The winning projects submitted by the IFB offices are among 24 activities that have been selected to be showcased at the 2023 American Farm Bureau Convention in San Juan, Puerto Rico, where a national CAE award winner will be elected.

The IFB noted that the Bureau, Marshall-Putnam and Stark county farm bureaus partnered with Arukah Institute of Health to build community support around the topic of farmer mental health. Their program included hosting farmer breakfasts, launching podcast interviews through the local hospital, releasing an informational video on a mental health website, conducting TV news interviews and creating a portal allowing farmers to speak with mental health professionals in the comfort of their own community. Their initiative has grown to connect with community partners to offer programming including women’s workshops and Mental Health First Aid courses. Congratulations to all of the Illinois CAE winners!

The directory, which was published last week, includes information on 15 incentive opportunities, including publicly funded programs at the federal, state, and county levels. Privately funded programs throughout Illinois are also detailed. The directory includes a brief description, relevant geography, contract length, payment details, and contact information for each program. This will allow farmers and landowners to be able to compare programs and select the option that is best for them.

The directory also includes a “Stacking Matrix’’ to help farmers understand which programs can be combined to receive multiple incentives. Because many programs offer exceptions or exclusions for stacking, the Stacking Matrix serves to provide a program-by-program guide to stacking opportunities.

The Cover Crop Incentive Directory and Stacking Matrix is available to view on ISAP’s website.

However, things could be worse: Events that could cause increases in corn, natural gas, and anhydrous ammonia prices include increased tensions over Ukraine-Russia, with the potential for reduced flows of natural gas out of Russia to Western Europe and reduced grain flows out of Ukraine Poor growing conditions in South America leads to lower supplies of grains, a cold winter in the United States resulting in increased use of natural gas, or strong economic growth, particularly in China, leading to increased demand for agricultural commodities could send prices even higher. (Schnitkey, G., C. Zulauf, K. Swanson, N. Paulson and J. Baltz. “PACE and Nitrogen Fertilizer Strategies for 2023.” farmdoc daily)