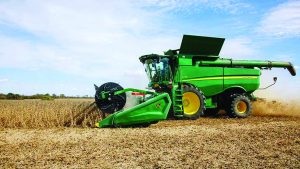 John Deere farming equipment, such as this S770 combine, is at the heart of a federal right-to-repair lawsuit that has been centralized in northern Illinois. (John Deere Co. image)

In this week’s farm and rural news roundup: The right to repair lawsuit aimed partially at John Deere is heating up in Illinois. Also this week, we have reports on USDA urban agriculture money flowing to Chicago, and news about the 2022 Illinois State Fair. Please read on …

BLOOMINGTON — Most of the right-to-repair class action lawsuits have been consolidated and will be heard by the U.S. District Court for the Northern District of Illinois. Many of these lawsuits are filed by farmers against northern Illinois-based John Deere and other farm machinery manufacturers over the right to repair their own equipment. The lawsuits include the latest filer, DeLine Farms of Illinois, Missouri and three other states which joined the class action on May 25.

At the heart of the cases are allegations that Deere has monopolized the repair service market for their equipment with onboard central computers, which the company has emphatically denied. “John Deere equipment is manufactured to the highest engineering standards to maximize performance while protecting the safety and health of our customers and the environment,” Deere said in a statement issued to agricultural media outlet DTN. “While we support the customers’ right to maintain and repair their products, we do not support customers modifying embedded software due to risks related to safety, emissions compliance and the uncertainty it creates in the aftermarket.”

“IFCA (Illinois Fertilizer and Chemical Association) has had many conversations with legislators regarding this issue,” according to a recent IIFCA newsletter. IFCA supports “fair repair” legislation that was introduced in 27 states in 2021 after Massachusetts passed a similar law in 2020. According to the IFCA, the bill will be reintroduced next year.

WASHINGTON, D.C. — Chicago will be one of six new urban USDA county committees that will help deliver key programs to urban producers, the Agriculture Department announced on June 3. The new urban committees will serve to distribute $43 million in newly announced grants intended to strengthen the food supply chain and transform the food system into a fairer, more competitive and more resilient system.

The new USDA investments include $10.2 million in cooperative agreements to expand compost and food waste reduction efforts, $14.2 million in new grants to support the development of urban agriculture projects and almost $19 million to fund 75 grant proposals left over from the 2021 application cycle.

The new county committees for urban agriculture — Detroit, Grand Rapids, Los Angeles, Brooklyn and Oakland, in addition to Chicago — will join 11 previously established county committees. Urban farmers who utilize USDA programs are encouraged to nominate themselves or others for a committee position.

BLOOMINGTON — The American River Transportation Company, a wholly owned subsidiary of the Archer Daniels Midland company, is transitioning to higher biodiesel blends for their barge fleet and has officially joined the Illinois Soybean Association’s B20 Club. ARTCO is powering up to 29 vessels on the Mississippi, Illinois and Ohio rivers using biodiesel blends up to B30. The company consumes up to 22 million gallons of B20-B30 annually, according to ADM president of transportation Chris Boerm.

“ADM has aggressive goals to reduce our overall environmental footprint, and we are committed to making improvements throughout our entire transportation network,” said Boerm. “We are switching to less carbon-intense fuels wherever possible and, even though we’ve been using biodiesel for many years in our fleet, are very excited to announce the transition to higher biodiesel blends for our ARTCO assets and to officially join the B20 Club.”

ARTCO estimates its emission reductions by virtue of utilizing high biodiesel blends at 11.4 tons of particulate matter, 5.6 tons of hydrocarbons, 91.7 tons of carbon monoxide, and 42,265 tons of carbon dioxide equivalent (CO2e) per year. This amount of CO2e reduction is equivalent to planting 634,001 trees or installing 1.45 million LED light bulbs, according to an ISA news release.

“The Illinois Soybean Association is excited to welcome ARTCO as a new member of the B20 Club. With these new partnerships, we can reduce carbon emissions all along the supply chain using a better, cleaner fuel that is grown right here in Illinois,” said Andrew Larson, ISA Director of Public Policy and Market Development.

SPRINGFIELD — A field composed strictly of Illinois horses will be showcased to kick off the 2022 grandstand calendar for the Illinois State Fair in Springfield. On Thursday, Aug. 11 every horse that takes to the fair’s one-mile track will be either Illinois conceived or foaled, Illinois Department of Agriculture Director Jerry Costello announced last week.

“To be able to provide an expanded showcase of Illinois horses on our State’s biggest stage and on one of the world’s fastest tracks is a tremendous way to start off our state fair,” Costello stated. “Our hope is that those who have never experienced harness racing at the fair will come out and enjoy these races and the ones that follow throughout the fair.”

State fair harness races are in a split-card format with post times at noon and 5 p.m. and are free with paid fair admission. In addition to the opening day races featuring Illinois horses, harness racing will also be held Aug. 12, 13, 17 and 18.

Tickets for all grandstand events are available through Ticketmaster or in-person at the ISF box office. (Illinois e-News)

Agriculture Day at the Illinois State Fair is Tuesday, Aug. 12. Willie Nelson and Family will perform at the grandstand. (Illinois e-News)