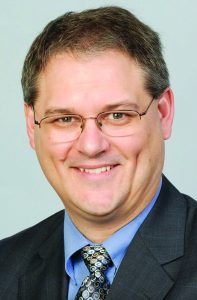 Kevin Semlow, Illinois Farm Bureau director of state legislation, is concerned that the recently approved state political redistricting map is detrimental in nature to rural Illinoisans and will not stand up to legal scrutiny. (IFB photo)

This week’s report takes us from between the crop rows to inside the State Capitol for a peek at how Illinois’ proposed FY 2022 budget plays out for farmers and ranchers. We also have an exclusive report on reaction to the new state redistricting maps approved last week. Please read on …

SPRINGFIELD — The Illinois General Assembly last week pushed through a budget that proponents say will fully fund the state’s onerous pension program and other top obligations, while trimming $3 billion of debt. The Illinois Farm Bureau reported on June 1 that state lawmakers passed a fiscal year 2022 budget with about $42.2 billion in general revenue funds and $2.5 billion in federal American Rescue Plan Act dollars. The vote ran 37-21 in favor in the Senate and 72-44 in the House, with a single present vote.

The fiscal year 2022 budget maintains funding levels for the Illinois Department of Agriculture and agriculture programs and services. It would repay the state’s federal short-term borrowing early and pay back state interfund borrowing from previous years, totaling $3 billion in debt. The budget also allows the state to prepay Medicaid payments, using higher matching funds from the federal government, the farm bureau reported.

“As our state continues to move forward from the pandemic, this budget addresses the issues our communities are facing every day and demonstrates the state’s investment in recovery now,” said State Senator Patrick Joyce, D-Essex, in a news release. “I’m proud to support a balanced, responsible budget that keeps our farming families in mind, increasing funding to programs that help our agricultural industry continue to thrive. This plan puts our entire state—including our rural communities—on the path to real, lasting recovery.”

“In addition, the Illinois General Assembly also protected the Partners for Conservation Fund for one more year, and ensured that conversations can move forward on how to best provide stable, long-term funding for conservation efforts for the state’s more than 24 million acres of cropland. For the first time, the state budget includes advancing the goals of the Illinois NLRS as a key funding priority of the state’s conservation programs,” said Webster, whose blog “Illinois Takes Big Regenerative Agriculture Steps,” can be accessed through the AFT website www.farmland.org.

SPRINGFIELD — The busy end of the Illinois General Assembly session included passage of several farmer-led, consumer-powered initiatives promoted by the Illinois Stewardship Alliance. Executive Director Liz Stelk lauded the passage of the Illinois Partners for Nutrient Loss Reduction Act and the doubling of funding for the state’s Cover Crop Reward Program, while also celebrating passage of legislation including the Home to Market Act — Sen. Dave Koehler, D-Peoria and Rep. Will Guzzardi, D-Chicago — and House Resolution 148, which shifts public dollars toward healthy, locally grown food through the establishment of a Good Food Purchasing Policy Task Force.

Stelk and ISA are also celebrating passage of a $500,000 SNAP price match for purchases made at farmers markets through the Funding For Healthy Local Food Incentives Fund, support for black farmers through HR0046, which addresses racial equality in agriculture, and the Vegetable Garden Protection Act (HB0633). (ISA news)

BLOOMINGTON — Also passed by the Illinois General Assembly last week: a new redistricting map pushed through via party-line vote that has many crying foul, for a variety of reasons. I reached out to Illinois Farm Bureau Director of State Legislation Kevin Semlow for comment on the new map and how it might affect rural residents and farmers. In a lengthy response, Semlow said the new map neglects rural communities and may not stand up to legal scrutiny. He is also calling for a ballot question for Illinois citizens to determine whether voters would like to see redistricting performed by a bipartisan board.

“We fully realize the difficult situation our lawmakers were put in with the delay of the U.S. 2020 Census data for redistricting purposes, therefore having to look for other reliable data. The unfortunate situation that Illinois finds itself in is that they have chosen to rely on American Community Survey sampling data from the U.S. Census Bureau, which is estimated by some groups to be 41,877 lower than the initial 2020 Census counts. This puts our maps in a precarious legal situation, undoubtedly leading to time-consuming and costly legal challenges,” Semlow replied.

“We also want to highlight the fact that these maps were drawn using an archaic, troubling, and partisan process where the legislators on one side of the aisle are drawing the maps affecting the whole state. This process neglects many including our rural communities. IFB policy, which is set through a grassroots, democratic membership process, calls for redistricting to be conducted through an unbiased process, led by a non-politically affiliated commission. This would ensure districts are drawn in compact, contiguous, following county, township, and municipal boundaries as much as possible and done in a way that is impartial to party or incumbency. We call upon the General Assembly to bring more transparency, equity, and balance to the redistricting process by approving a question to be placed before the voters to amend the Illinois State Constitution to reform our redistricting process.”

95 percent of Illinois’ corn had been planted as of May 30, as had 89 percent of the state’s soybeans. (USDA-NASS)