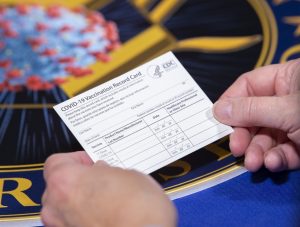 The Illinois Department of Public Health is taking its COVID-19 vaccination efforts to reach college and university students throughout the state next week.Il

SPRINGFIELD — Nearly one quarter of the state’s population is fully vaccinated against COVID-19, according to data released Friday, April 16 by the Illinois Department of Public Health.

The state has administered 7,779,290 doses of the vaccine out of more than 9.7 million total doses received by state and local health officials.

The vaccination milestone came after IDPH announced on Tuesday, April 13 the state is pausing distribution of a COVID-19 vaccine developed by Johnson & Johnson, following the advice of the U.S. Food and Drug Administration and Centers for Disease Control and Prevention.

The federal agencies made that recommendation after reporting rare and severe blood clots in six women aged 18-48, whose symptoms occurred 6 to 13 days after vaccination, according to the CDC. More than 6.8 million Johnson & Johnson vaccine doses have been administered nationwide.

On Friday, April 16, the IDPH also announced dates and sites throughout the state that will offer vaccination appointments specifically for college and university students, in an effort to vaccinate college students in Illinois.

Colleges and universities offered links where students could register for an appointment, according to the IDPH news release.

“College campuses are microcosms of the communities in which they are located, and if we see an increase in cases on campus, we will see an increase in cases in the community,” IDPH Director Dr. Ngozi Ezike said in the release.  “Especially as we are starting to see variants become more prevalent and the number of cases and hospitals increasing statewide, we need to vaccinate as many people as possible as quickly as possible.”’

Cases on the rise

As the state’s vaccination rate increases, the number of new confirmed and probable cases of COVID-19 has also been on the rise this month.

Hospitalizations due to COVID-19 have also increased relative to last month. Statewide data shows the percentage of hospital beds used by COVID-19 patients have reached between 4 and 6 percent of the total number of beds while that percentage was between 3 and 4 percent in March.

The state also reported a total of 2,058 individuals were hospitalized with COVID-19 as of Thursday night, April 15, an increase of 15 people from the day prior.

There were 21 COVID-19 related deaths reported Friday, bringing the state death toll to 21,630.