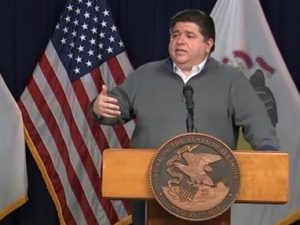 SPRINGFIELD – As statewide COVID-19 hospitalizations remain stable, state leaders say not much has changed to warrant an altered response to the pandemic.

“The virus hasn’t gone away. It is still out there, and nothing that we’re doing now is changing that fact,” Gov. J.B. Pritzker said during his daily COVID-19 briefing Wednesday, May 6 in Chicago. “What we have changed, what has made things better, what has reduced the number of potential infections and the number of people going into the hospital and dying, is the fact that people have adhered to the stay-at-home order.”

The governor’s comments came one day after he laid out a five-phase, region-specific reopening plan that requires several improvements in hospitalization and case growth metrics before the state can slowly begin reopening its economy and rolling back social distancing measures.

It also came as the Illinois Department of Public Health reported the virus has now sickened 68,232 residents and is linked to 2,974 deaths. In the past 24 hours, 136 COVID-19-related deaths and 2,270 more confirmed cases were reported.

Hospitalization figures, which are reported daily by the various regions, have remained in a relative plateau for about a month. As of midnight, there were 4,832 COVID-19-positive individuals hospitalized, 1,231 in intensive care units and 780 on ventilators statewide.

A positivity rate below 20 percent for 14 straight days is a precondition in Pritzker’s plan before any region can move from phase two, or the “flattening” phase the state is currently in, to phase three, in which barbershops, salons and other select businesses can reopen and gatherings of up to 10 people can resume.

Phase five, or a full reopening of the economy, could be well over a year away, and is dependent on a vaccine being available, an effective and widely available treatment, or the elimination of new cases in a region.

“Well, I’m not the one holding back the economy from stage five, the COVID-19 virus is,” Pritzker said. “That’s the thing that’s been causing the very high infection rates, the hospitalizations and the deaths.” 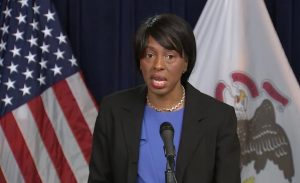 Illinois Department of Public Health Director Dr. Ngozi Ezike, as she does during every COVID-19 daily update, provides the number of new confirmed cases (2,270) and deaths (136) related to the novel coronavirus in the past 24 hours during the Wednesday, May 6 news conference in Chicago. (Credit: blueroomstream.com)

Pritzker once again said he was listening to scientists and epidemiologists to craft the plan.

House Republicans on Wednesday criticized the plan, saying it would not work and would kill small businesses, and they called on Democratic leaders to call a legislative session – perhaps at a Springfield convention center to make social distancing possible.

“This plan presumes that the governor shall rule the state for the upcoming months, and possibly much longer, if the vaccination is not available,” House Republican Leader Jim Durkin, R-Western Springs, said in a videoconference. “I took an oath of office to faithfully discharge my duties in the coequal branch of the government called the Legislature. I did not abdicate nor relinquish my elected responsibilities to the executive branch.”

Pritzker reiterated Wednesday that he frequently seeks individual input from lawmakers, who are also working in groups about potential legislative matters – but Republicans say that’s not enough.

“I’ll work with the Legislature in any way that they would like to work together, but my job, and their job, is to help keep the people of Illinois safe and healthy,” Pritzker said.

House Speaker Michael Madigan, who was directly called out by House Republicans in the videoconference, released a statement through a spokesperson saying the safety of lawmakers, staff and the public will come first when considering a return to session.

“While I am eager to see a return to normalcy, we are talking about people’s lives, and any plan for a return to Springfield must have the health and safety of all those involved as a top priority, including the communities the members represent,” Madigan said in the statement.

At the briefing Wednesday, officials also faced questions as to how congregate settings would play into the reopening phases, as some communities with nursing homes or prisons are seeing elevated deaths and cases focused mainly in those facilities.

“Even if you were to keep everybody in a nursing facility that’s a resident … you have staff coming in and out literally every day, multiple shifts,” Pritzker said. “Many of those people live in the areas that those nursing homes and prisons exist and so I don’t think people should ignore the idea that there’s an infection in one of these congregate settings, thinking that it doesn’t have any effect on the community, so no, we’re not ignoring those.”

Pritzker said his plan does not consider when nursing homes can reopen to allow regular visits with family members.

“Nothing in this situation has changed to decrease the risk for that most vulnerable population,” IDPH Director Dr. Ngozi Ezike said. “When there is a game changer, when there is a treatment that would be able to counter the devastation that we have seen thus far in our long-term care facilities, we can think about loosening (restrictions).”

Ezike said that “almost 90 percent” of fatalities counted in Illinois have had “an associated comorbidity” or other risk factor such as advanced age, mirroring worldwide data.

“Age isn’t necessarily a comorbidity, but it puts you in a higher risk status so we have seen people over the age of 65,” she said. “We’ve talked about heart disease, we’ve talked about chronic obstructive pulmonary disease, asthma, diabetes, so there’s a list of conditions, which are quite common in our population, along with elevated age.”

She said immunocompromised persons, pregnant women and those recently pregnant are all at greater risk as well.

The virus has also proved more prevalent and deadlier in communities of color, Pritzker said.

“Because of decades of disparities in health care access and delivery, we’ve seen the worst effects of this pandemic fall disproportionately upon the backs of communities of color in our state,” he said. “That’s especially true in our black communities, our Native American communities and our Latinx communities.”

Pritzker said those who identified as Latinx on a state survey of people tested had a COVID-19 positivity rate five times higher than the state’s average. Of the residents who have been tested, about half completed their demographic information. Of those, 7.6 percent – or 26,000 – identified as Hispanic, and 60 percent of them – nearly 16,000 – tested positive for the virus.

The Pritzker administration “has made it a priority” to partner with testing facilities across the state in areas where the population is most at risk, he said.

“Decades of institutional inequities and obstacles for members of our Latinx communities are now amplified in this pandemic, and while we can’t fix generations of history in the span of a few months, we must advance equity in our public health response today everywhere and anywhere we can,” Pritzker said.

Each of the seven state-run drive-thru facilities offers language services, and other testing sites located in Latinx communities were chosen based on their emphasis on accessibility.

The governor said there are “thousands” of free hotel rooms available for residents asked to isolate from their families or roommates. Meals, medical assistance and other services are available in these accommodations. To access a room, he said residents should contact their local health department.