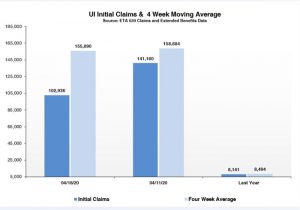 SPRINGFIELD — The Illinois Department of Employment Security said Thursday that 4.4 million Americans filed first-time unemployment claims during the week that ended April 18, including 102,936 workers in Illinois.

According to the U.S. Department of Labor, 520,227 workers in Illinois, or 8.2 percent of the state’s civilian labor force, drew unemployment benefits during the week.

That news came during the fifth week of a statewide stay-at-home order that Gov. J.B. Pritzker issued to control the spread of COVID-19, an order that forced nonessential businesses such as bars, restaurants and many retail outlets to close.

That order had been scheduled to expire on April 30, but Pritzker announced Thursday that a modified stay-at-home order allowing some businesses to reopen will remain in place through May 30.

Under the modified order, which takes effect May 1, hospitals will be allowed to resume surgeries that have been delayed and elective procedures on patients who test negative for COVID-19. The health care industry has seen a sharp rise in unemployment during the pandemic as hospitals and outpatient clinics have been forced to cancel or delay elective procedures, which are a major source of their revenue.

Essential businesses and manufacturers will come under new guidelines as well, such as requirements to provide face-coverings to all employees who aren’t able to maintain a six-foot social distance, occupancy limits and precautions such as staggering shifts and operating only essential lines for manufacturers.

Also, garden centers and nurseries will be considered essential businesses and can reopen, although they will have to follow social distancing requirements and they must require employees and customers to wear face coverings. Animal grooming services will also be allowed to reopen.

Nonessential retail stores will be allowed to reopen to fulfill telephone and online orders for pick-up outside the store or for delivery.

Golf courses will also be allowed to reopen, although they will be required to establish social distancing requirements under state guidance. State parks will reopen in phases, although boating and fishing will be limited to groups of no more than two.

It wasn’t immediately clear Thursday how significant an impact the revised stay-at-home order will have on the state’s overall unemployment rate. The Department of Labor will report official unemployment figures for April in mid-May.

The changes announced by Pritzker represent many of the changes that Republicans in the General Assembly have been urging him to make in recent days. Some Republicans, however, wanted even further easing of restrictions, such as allowing small, independent retailers, barber shops and hair salons to reopen as long as they follow health guidelines and limit the number of people in the store at one time.

Some have argued that the restrictions have been unfair to small, independent retailers because, for example, shoe stores are considered nonessential businesses while big-box retailers like Walmart and Target, which also sell shoes, have been allowed to remain open.

Pritzker, however, said Thursday that without the social distancing measures, COVID-19 would have spread much faster, causing many more deaths and overwhelming the state’s hospital capacity. He also said that while hospitalizations and deaths have begun to decline, there are still enough infected people in the state to cause a second wave of the disease if the restrictions were removed entirely.

Pritzker also said that he had listened to other elected officials from both parties as well as Illinois business leaders and medical experts from throughout the world.

“My intention, as always, is to put your health and safety first as we make some practical adjustments based on what we’ve learned in the first five weeks of the stay-at-home order,” he said.

“I want Illinoisans to know that the Executive Order is not final, but it is a working document subject to change,” Durkin said in a statement Thursday. “While I am pleased with today’s actions, we must do more to restore economic vitality of the state while maintaining the health and safety of our citizens.”