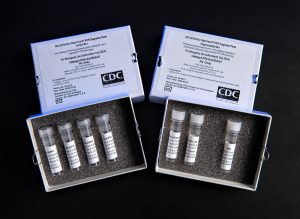 SPRINGFIELD — New confirmed cases of COVID-19 and the number of tests results reported skyrocketed Friday, Sept. 4 reflecting the clearing of a data backlog in the state’s public reporting of case counts.

The backlog lasted approximately two days and drove down test counts, apparently starting Tuesday, Sept. 1. After clearing the backlog by Sept. 4, Illinois Department of Public Health reported 5,368 new cases among 149,273 test results recorded over 24 hours. That made for a 3.6 percent one-day positivity rate.

The number, taken by itself, represents a massive spike more than doubling the previous highest testing total and smashing the single-day confirmed case record by more than 1,300.

But, if the numbers of the previous four days are averaged together, it results in 2,587 cases and 61,445 tests per-day average.

That accounts for a 4.2 percent average positivity rate over the four-day period, bringing the rolling seven-day average rate to 4.1 percent.

IDPH officials said labs that process tests enter the numbers into an electronic reporting system that feeds the data to the state. The increase in testing capacity in Illinois led to the increase in data processing, which slowed the system down.

Upgrades to the system allow for faster processing and should prevent such a backlog from happening again, according to IDPH. The department also said there was no delay in the reporting of individual test results. The data being reported publicly was the same as data being viewed by state officials during the backlog, officials added.

IDPH also reported another 29 deaths from the virus, bringing the total to 8,143 since the pandemic first reached Illinois. Labs have confirmed more than 245,371 cases during that span with more than 4.3 million test results recorded.

At the end of Sept. 3, hospitalizations for the virus had remained nearly level from the day before. There were 1,621 people in Illinois hospitalized with COVID-19, including 360 in intensive care units and 155 on ventilators.

The state also reported 29 counties are at a warning level for novel coronavirus disease, which is one fewer than last week.  A county enters a warning level when two or more COVID-19 risk indicators measuring the amount of COVID-19 increase, including cases per 100,000 residents, hospital bed usage, test positivity rate and number of deaths among others.

Reasons for counties reaching the warning level vary, according to IDPH, but common factors include outbreaks associated with college parties, weddings, large gatherings, bars and clubs, long-term care facilities and other congregate settings, travel to neighboring states, and spread among members of the same household.