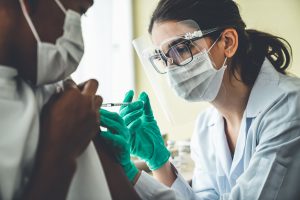 The revisions to the HCRC Act states that it is not a violation of the law for an employer “to take any measures or impose any requirements …intended to prevent contraction or transmission of COVID-19.”

SPRINGFIELD – The Illinois Senate joined the House on Thursday, Oct. 28 in approving a change to the Health Care Right of Conscience Act that was requested by the governor and attorney general, putting it one signature away from becoming law.

The HCRC Act currently prohibits discrimination against anyone for their “conscientious refusal to receive, obtain, accept, perform, assist, counsel, suggest, recommend, refer or participate in any way in any particular form of health care services contrary to his or her conscience.”

The passage came one day before the Food and Drug Administration authorized the use of the Pfizer-BioNTech coronavirus vaccine for children ages 5-11. That authorization came Friday, Oct. 29.

The bill passed Thursday would add language stating that it is not a violation of the law for an employer “to take any measures or impose any requirements …intended to prevent contraction or transmission of COVID-19.”

Its supporters believe the measure will clarify the legislature’s intent as a number of court cases continue through the system in which Illinoisans are challenging COVID-19 vaccine or testing requirements by citing protections afforded in the HCRC Act. It’s needed to close a legal loophole allowing people to flout those mandates, they argued.

Critics of the bill, however, argued the language is overly broad and that the Health Care Right of Conscience Act actually was intended to protect an individual’s right to make his or her own health care decisions.

It passed the Senate 31-24 just before 11 p.m. Oct. 28 with no Republican votes. Because the bill did not receive a three-fifths majority in both chambers, its effective date is set for June 1, 2022, per a provision of the state constitution pertaining to bills passed after May 31.

Supporters, including bill sponsors Rep. Robyn Gabel, D-Elgin, and Senate President Don Harmon, D-Oak Park, argued over the past two days that the measure does not mandate vaccination.

“Contrary to rampant misinformation campaigns, this bill is not a vaccine mandate,” Gabel said on Wednesday, Oct. 27. “In fact, it does not require anyone to do anything. As the bill itself says, this is simply a declaration of existing law and shall not be construed as a new enactment.” 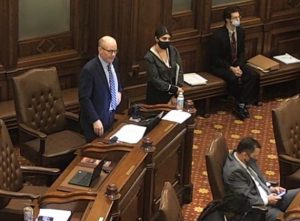 Harmon argued on Oct. 28  that the existing law should not be applicable to mitigation measures aimed at slowing a deadly pandemic. Those with health care or religious concerns regarding mandate compliance can still access federal exemptions, he said in floor debate.

“The Health Care Right of Conscience Act was adopted in 1977 and was intended, I think fairly clearly, to provide protection to doctors, nurses, pharmacists, other health care professionals who, based on their own conscience, did not want to participate in certain reproductive health care services or prescriptions,” he said.

“That law, broadly drafted, is being construed today and litigation is essentially a ’I choose not to follow these rules and as justification for that I will cite the Health Care Right of Conscience Act.’ I don’t believe that is at all consistent with the original intent,” he added.

He likened the effort to use the act not to be tested to trying to avoid detection for drunk driving.

“Let’s imagine that your constituent is pulled over under suspicion of drunken driving,” Harmon said in committee discussion with Sen. Jil Tracy, R-Quincy. “Could that constituent tell the officer they would refuse a breathalyzer test on the Health Care Right of Conscience Act? Could they refuse a field sobriety test because there’s medical conditions being tested? That’s the absurd conclusion we reach if you read it as expansively as you are suggesting.”

Tracy said she disagreed with the interpretation.

“So I think that repealing this act or changing it takes away from the basic premise it was designed to do, to allow Americans, Illinoisans to invoke something that they’re not made to do that they disagree with because of their moral conscience,” she said.

More than 50,000 witness slips were filed against the bill on the General Assembly’s website. Lawmakers reported receiving hundreds of calls to their offices against the change.

Sen. Sue Rezin, R-Morris, said the HCRC Act, when initially passed, “created a line that stopped the government from forcing its citizens to receive medical procedures and services that went against their sincerely held beliefs.”

“Now, the government’s trying to erase that line,” she said. “Once again, it’s our job here today to stand for those who are standing up for themselves.”

“Today, we’re diminishing the protections in the workplace for a minor medical procedure,” he said. “My objection is not about vaccinations. I’m vaccinated. … We go down this path, we don’t know where it ends.”

Harmon said in his closing speech that lawmakers are “trying to strike a balance” between liberty and public safety,

“You’ve asked where we draw the line,” he said. “The line of my personal liberty ends at the beginning of your nose. …This law was never intended to preclude public health responses to a global pandemic.”