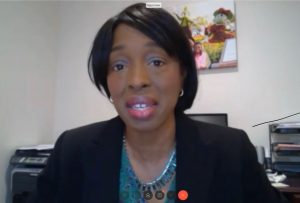 Dr. Ngozi Ezike, director of the Illinois Department of Public Health, announces during a video news conference Tuesday, May 19 that there were 1,545 new confirmed cases of COVID-19 in the state in the past 24 hours. There also were an additional 146 related deaths. (Credit: blueroomstream.com)

SPRINGFIELD – Hospital metrics Tuesday, May 19 showed the number of hospital beds, intensive care unit beds and ventilators occupied by COVID-19 patients are all at their lowest levels since the state began updating the numbers daily on April 12.

Illinois Department of Public Health Director Dr. Ngozi Ezike said during the governor’s daily COVID-19 teleconference Tuesday, May 18 that the trend downward was good news, although they would be watched closely as the state moves toward a gradual reopening.

“This just solidifies these measures have been working, both the stay-at-home, both the masking, both the social distancing. All of those things are affected and that’s why we’ve got numbers that are improving,” she said.

Ezike said while case numbers continue to climb, that’s a function of increased testing. Over the past seven days, Gov. J.B. Pritzker said, Illinois has become the number one state in the nation for testing per capita among the most populous states in the nation.

There were 1,545 new cases reported in the past 24 hours among 18,443 tested for a positivity rate of 8.4 percent. There are now 98,030 confirmed cases among 621,684 tested since the pandemic arrived, although the majority of those who have tested positive have recovered.

There were another 146 virus-related deaths reported Tuesday as well, pushing the total to 4,379.

“And we know that the deaths would have been significantly increased if we had not implemented a stay-at-home order,” Ezike said. “We could have seen tens of thousands of deaths. So as we move to reopen we must do it safely and deliberately.”

Pritzker said all four regions of the state are set to move to the third phase of his reopening plan by the end of May.

Ezike said as more Illinoisans venture farther from their homes, health officials will be watching the hospitalization numbers closely to “make sure that these measures that have loosened don’t have a spike that will make us want to tamp the brakes a little bit.”