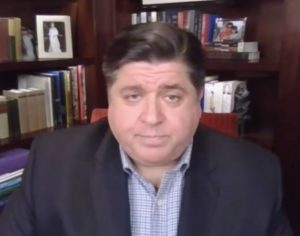 SPRINGFIELD – More than 100,000 doses of COVID-19 vaccines have been administered in Illinois since the first vaccine was approved for emergency use this month, more than any other state in the nation, and state officials expect the pace of the vaccination program to speed up as the federal government begins distributing a second drug this week.

Gov. J.B. Pritzker made that announcement during a virtual media briefing Wednesday, Dec. 23 adding that eventually, larger states like California and Texas will surpass Illinois simply because of the size of their populations.

“But the vaccine team in Illinois sprinted past them all in week one,” Pritzker said.

The U.S. Food and Drug Administration granted Emergency Use Authorization Dec. 11 for a vaccine developed by the drug companies Pfizer and BioNTech, and the state began delivering those vaccines last week.

On Friday, Dec. 18, FDA granted the same authorization for a vaccine developed by Moderna and shipments of that vaccine are now being distributed to hospitals and local health departments throughout the state.

“And with this week’s Moderna shipments, vaccines will have officially reached all 102 counties in Illinois,” Pritzker said at the Dec. 23 briefing. 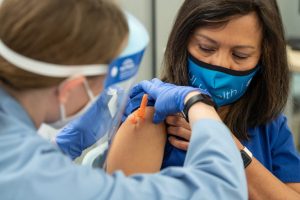 The city of Chicago, which receives its own shipments directly from the federal government, expects to receive 15,600 doses of the Pfizer vaccine and 48,000 doses of the Moderna vaccine this week.

All of the vaccines being distributed in the first phase of the program are earmarked for health care workers and the residents and staff of long-term care facilities. State officials said this week they expect it will take four to six weeks to complete that phase before the program expands to cover people over age 75 and other front-line essential workers.

Meanwhile, the spread of COVID-19 in Illinois continued to show signs of improvement as of Dec. 23 as the Illinois Department of Public Health as the seven-day rolling average positivity rate came in at 7.5 percent, the fourth consecutive day below 8 percent.

Despite those trends, however, Pritzker said he has no immediate plans to lift the Tier 3 mitigations currently in effect statewide, which includes the closure of bars and restaurants to indoor service and strict limits on public gatherings.

“The challenge that we have is, what we don’t want to do is swing back and forth between mitigations and not having mitigations within days or a week or two of one another,” Pritzker said. “And as we head into the Christmas holiday and New Year’s, my concern is that we might see — we are going likely to see — some uptick from Christmas and from New Years in hospitalizations as well as cases.”

“Having said that,” he added, “even if we brought the entire state or specific regions from Tier 3 to Tier 2, that would not open bars and restaurants for indoor service yet. We need to bring it down even further and for a longer period of time.”

Pritzker did announce that his administration is increasing funding for child care providers that take part in the state’s Child Care Assistance Program, or CCAP, a program that helps low-income families pay for child care.

Pritzker said the state will invest $20 million of its remaining allocation from the federal Coronavirus Aid, Relief and Economic Security, or CARES Act, to pay for all eligible days of child care for families enrolled in the program, regardless of the child’s actual attendance, for all of December, January and February.

In addition, he said, the Department of Children and Family Services will lift the capacity limits all licensed family child care providers this month, returning them to full capacity. He said licensed child care centers may return to full capacity in early January, if the COVID-19 rolling positivity rate remains below 9 percent.

The money will also be used to buy and distribute personal protective equipment to child care providers throughout the state.

Pritzker said the intent of the additional funding is to provide some financial stability to child care providers who have seen their enrollments decline or have had staff call in sick during the pandemic.

“These tumultuous times have rained down in multiple ways on our early childhood network of providers,” Pritzker said. “And I wanted to make it easier for them so that we can make sure that childcare is available to parents who need it.”