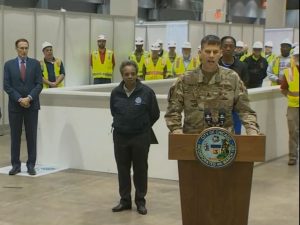 Major General Robert F. Whittle, Jr., commander and district engineer of the U.S. Army Corps of Engineers’ Great Lakes and Ohio River Division, speaks during a news conference Friday in Chicago to address the state’s efforts to combat the outbreak of the novel coronavirus disease, COVID-19, in Illinois. The news event was held in McCormick Place, which is being converted into a 3,000-bed medical facility to hold overflow patients in Chicago. (Credit: blueroomstream.com)

SPRINGFIELD – COVID-19 has now claimed 210 lives in Illinois as officials reported 53 more deaths and 1,209 new confirmed cases Friday, April 3 during a news conference at a Chicago convention center that will house patients with the virus in the coming weeks.

The McCormick Place convention center can now treat 500 non-intensive care COVID-19 patients in rooms measuring 10 square feet, with the plan of eventually growing it to a capacity of 3,000 by the end of April. The first phase also included 14 nursing stations and support rooms for medical supply storage, pharmacy and housekeeping services.

“This is a facility that we stood up because the human population is susceptible to this virus at a scale never before seen in our lifetimes,” Gov. J.B. Pritzker said at a news conference.  “And it very well might be that this virus overwhelms our existing hospital capacity in Illinois, as it has done in Italy and other countries around the world, and as it’s beginning to do in other parts of our country, too. … We’re already seeing this very real scenario take place.”

The planned additional facilities include the former Advocate Sherman Hospital campus in Elgin, the Metro South Health Center in Blue Island, and Westlake Hospital in Melrose Park, all in northern Illinois.

The latest addition to the list is the site of the former Vibra Hospital in Springfield, which the state is acquiring to expand capacity.

Nearly 140 contracted personnel from Illinois and other states will staff McCormick Place, which is overseen by Dr. Nick Turkal, the former CEO of Advocate Aurora Healthcare.

Pritzker said the state has upped its amount of beds in recent weeks, but only about 41 percent of the state’s 27,991 total hospital beds are open, and just 29 percent – or 806 – of the state’s 2,683 intensive care beds are available. 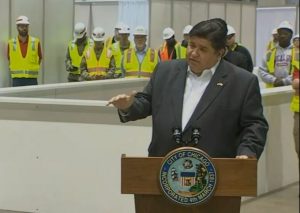 Gov. J.B. Pritzker speaks during the Friday, April 3 news conference in Chicago to provide updates on the state’s efforts to slow the spread of the novel coronavirus disease, COVID-19, in Illinois. The news event was held in McCormick Place, which is being converted into a 3,000-bed medical facility to hold overflow COVID-19 patients in Chicago. (Credit: blueroomstream.com)

The number of cases and deaths in Illinois each saw their largest single-day increases Friday as the total number of confirmed cases rose to 8,904 in 64 counties. DeWitt, Effingham and Jersey counties are reporting instances of the novel coronavirus disease for the first time.

The 53 deaths occurred in Christian, Cook, DuPage, Kane, Kankakee, Lake and Will counties.

A total of 48,048 people have been tested in the state, an increase of 4,392 over Thursday. But Pritzker said the state would like to test more than that.

“The federal government said they were going to provide millions of tests, and all the states relied upon that promise and it still hasn’t happened. So we’ve taken it upon ourselves to grow our testing capability,” he said, noting the state initially had the capacity to test only 200 per day at each of the state’s three labs during the beginning of the spread.

He said getting to 10,000 tests per day would allow the state to test symptomatic people each day, collect meaningful data on the spread and test whole populations of long-term care facilities if someone there tests positive.

“Now we’re doing around 5,000 (tests) on average per day and we’re trying to get to 10,000 per day. Frankly, I’d like to be at 100,000 per day if we could,” Pritzker said. “But right now the testing supplies, the swabs, everything about the tests are very difficult to come by and there’s no federal plan for this. So, every state is on their own.”

He also once again said the state will need greater federal financial help than a recent $2 trillion relief package provides for hospitals, as “the expenditures that are being made are extraordinary, because every hospital expects to be overrun.”

He said hospitals are “using facilities and equipment and supplies and hiring people like they’ve never done before. So, the federal government’s gotta step up and help us.”

He also made note of an executive order signed Wednesday that gives health care providers immunity from civil liability in the event of any injury or death that occurs while the facility is rendering COVID-19 aid, unless the provider acts in a grossly negligent manner or engages in willful misconduct.

He said the executive order was aimed at protecting medical facilities that are staffing up by bringing back recently retired health care providers, nursing students nearing graduation and others.

“And so those are not normal ways, … that’s not a usual way to staff up a medical facility,” Pritzker said. “And so the existing liability laws don’t really contemplate that. So we had to, you know, make some special arrangements.”

Pritzker also said it is “common sense” that people should be wearing masks when they are out in public, as he noted it appears the federal government would recommend such an action.  The Centers for Disease Control and Prevention on Friday recommended all Americans wear cloth masks like bandannas or scarves when outside of their homes.

“It’s a simple gesture to reduce the number of germs that you spread to those around you,” Pritzker said. “The doctors all agree that this virus can be spread through droplets, like when you sneeze or cough. So blocking that by wearing a mask in public seems like a common sense way to do what’s right for everyone around you.”

Health care workers looking to join the COVID-19 fight can sign up at www.illinoishelps.net, and donations of personal protective equipment can be facilitated by emailing PPE.donations@illinois.gov. For health related questions about COVID-19, call the Illinois Department of Public Health hotline at 1-800-889-3931 or email dph.sick@illinois.gov.