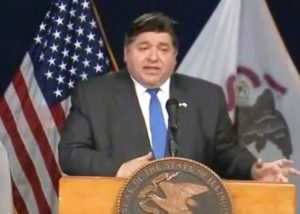 Gov. J.B. Pritzker says during a news conference Friday, May 1 in Chicago that the state will consider first ending stay-at-home orders in specific regions of Illinois where case counts and available health care statistics would indicate it’s safe to do so. (Credit: blueroomstream.com)

SPRINGFIELD — The state of Illinois is about to hire hundreds of people to embark on a massive contact-tracing project to identify people who might have been exposed to COVID-19.

That effort, Gov. J.B. Pritzker said, will help Illinois move away from a stay-at-home order that was being protested Friday, May 1 by rally-goers outside the Capitol in Springfield. Meanwhile, the state also announced the highest daily total of new COVID-19 cases since the pandemic began.

Pritzker said during his daily news briefing in Chicago that contact tracing has been part of the public health system’s response to every major disease outbreak and pandemic, including the early stages of the COVID-19 pandemic, but expanding that effort will be a critical step before Illinois reopens its economy.

“The difference now is that in order to move safely back toward normalcy, Illinois, the United States and frankly the whole world must contact-trace on a never-before-seen scale,” Pritzker said. “Contact tracing has played a role in our COVID-19 response since the earliest days of this pandemic as local health departments around the state have aggressively sought out each COVID-positive person to identify all their close contacts and then encouraging those contacts to opt into monitoring programs, and to follow recommendations.”

Contact tracing is the process of identifying people who have come into contact with someone who tests positive for the disease to notify them that they could become ill so they can take necessary precautions to prevent spreading the disease further.

Pritzker said that based on the state’s population, the effort in Illinois will likely have to be about twice that of a similar program in Massachusetts, which hired about 1,000 workers and is spending about $40 million. Massachusetts has a population of roughly 6.9 million people, while Illinois has about 12.7 million residents.

Pritzker was joined at Friday’s briefing by Dr. Wayne Duffus, an epidemic intelligence service officer at the Centers for Disease Control and Prevention who recently stepped in at the Illinois Department of Public Health to oversee the contact-tracing initiative.

Duffus emphasized that when someone is notified, the identity of the person who tested positive remains confidential. He said the state will be looking for people to work with public health departments in all regions of the state to serve as case investigators, contact tracers and “resource coordinators” who can line people up with necessary medical and social services.

“Contact tracing is a skill that can be performed by anyone who’s bright, interested, and has a charming personality,” Duffus said.

That announcement came on the first day of the newest, revised stay-at-home order in Illinois, which is scheduled to extend through May 30. But Duffus said the contact-tracing initiative likely won’t begin in earnest until sometime in late May, suggesting the order might have to be extended again beyond the end of the month. 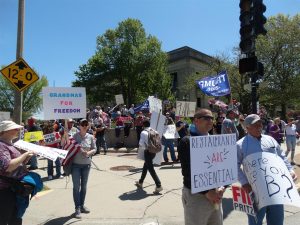 But Pritzker also said Friday that he is open to the possibility that some regions of the state could reopen earlier than that, depending on the local infection rate and the local capacity to provide hospital beds, ICU beds and ventilators in the event of a surge.

“Because it’s one thing to say, well, half of our hospital beds are ICU beds are available, but if that number is 35, right, that’s a very small number,” the governor said. “And if the population … is such that the 35 beds wouldn’t be able to cover that population if there was a surge, then we are concerned about an area. So it has to do with much more than just a population in an area, and it has a great deal to do with how much health care is available in that area.”

IDPH reported Friday that it had recorded a new daily high of 3,137 newly-confirmed cases of the disease over the previous 24 hours and an additional 105 virus-related deaths. That brings the statewide totals since the pandemic began to 56,055 confirmed cases and 2,457 related deaths

As of Friday, there were 4,900 people in Illinois hospitalized with the disease, including 1,263 in intensive care units and 777 ICU patients who were on ventilators.

As the new stay-at-home order took effect, large protests were staged in Springfield and Chicago by people calling for an end to the restriction. In Springfield, many of the protesters carried signs supporting President Donald Trump and other signs that read “Fire Pritzker.”

Meanwhile, the Chicago Tribune on Friday reported the results of a statewide survey that found 69 percent of respondents approved of Pritzker’s handling of the outbreak, while only 14 percent disapproved. The survey of 596 Illinois residents was conducted by Harvard, Rutgers and Northwestern universities had a margin of error of plus or minus 4 percentage points.

“So, let me begin just by saying that there are a few hundred protesters today, both here and in Springfield, and they’re exercising the right to free speech and I’ll defend to the death the right to exercise that right, even when they’re wrong,” Pritzker said when asked about the protests during his briefing in Chicago. “But I’d like to call everyone’s attention to the millions of Illinoisans who are staying at home and helping to keep people safe and healthy. They’re the ones who deserve to be commended today.”

Under the revised stay-at-home order, golf courses and some state parks are being reopened under strict social distancing guidelines. Retail stores that are considered nonessential businesses may reopen for online and telephone orders for delivery or pickup. And people are allowed to gather in groups of 10 or fewer, including for worship services, if they follow social distancing guidelines.

As of Friday, though, anyone over the age of 2 who is medically able to tolerate a facial covering is required to wear one when they are out in places where they cannot maintain a six-foot distance from other people.