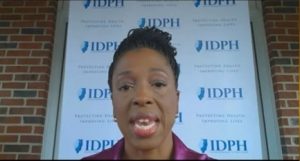 SPRINGFIELD — After Pfizer submitted its application for a COVID-19 vaccine to the U.S. Food and Drug Administration last week, Illinois public health officials have continued preparing locations to store and distribute the vaccine that could be released to frontline hospital workers in a matter of weeks.

Pfizer announced Friday, Nov. 20 that it planned to submit its COVID-19 vaccine application for emergency approval by the U.S. Food and Drug Administration — a process that could take between two and four weeks, Illinois Department of Public Health Director Dr. Ngozi Ezike said during Friday’s daily news conference.

On Friday, Nov. 21, Ezike said she expects the state will receive about 400,000 doses of the vaccine in the first round of distribution.

“That is the number that we’re working with to identify how we will partition that out for the first phase,” she said.

“And we already know that we heard directly from General (Gustave) Perna that, as soon as FDA approval is granted, the next day they would start shipping out vaccines,” she added.

Perna is the chief operating officer of Operation Warp Speed, which is the Trump administration’s national program to develop, manufacture and distribute a COVID-19 vaccine.

Slaoui said vaccines would be shipped to states “within 24 hours from approval.”

“Hopefully, people will start to be immunized, I would say, within 48 hours from the approval,” Slaoui said during the interview.

Under the state’s COVID-19 Mass Vaccination Planning Guide released in October, the first vaccine doses released will be given to front line hospital workers and first responders. 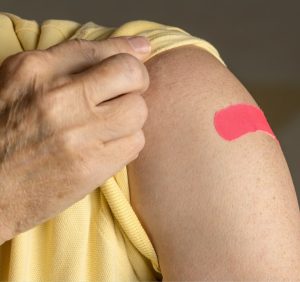 Under the state’s COVID-19 Mass Vaccination Planning Guide released in October, the first vaccine doses released will be given to front line hospital workers and first responders. (Photo courtesy of IDPH)

During the Nov. 23 news briefing, Gov. J.B. Pritzker was asked about ensuring access to the vaccine among low-income or marginalized communities.

“I just want to say that one of the big concerns that I have is making sure that we do this with an equity lens, and that includes not only people of color but rural communities, places that often are left out and left behind, forgotten,” he said. “I want them to be significantly considered for the near-term possibility of getting the vaccine but this vaccine is going to roll out over quite a number of months. We’re not really going to see, as I understand, the vaccine coming to the general public until perhaps March or April at the earliest.”

Ezike said the hospital workers set to receive the vaccine in the first rounds include staff who are not health care professionals, such as the cleaning and food staff.

“A lot of those people in those jobs are our Black and brown communities and so we are going to make sure that they are included in that first phase 1a,” she said.

Essential workers outside of hospitals and at-risk individuals, including people 65 years of age and older, will be next in line to receive the vaccine in the first phase of distribution when limited doses are available, according to the vaccination planning guide.

Ezike said the initial doses of the vaccine will be distributed through hospitals in each of the 11 regions of the state.

State public health officials are also identifying freezer storage locations, since Pfizer’s vaccine must be kept at 94 degrees below zero.

“We’ve also ordered 20 separate contraptions that can hold vaccines at that ultra-cold level. So those 20 freezers, if you will, will be placed in all of the 11 regions to make sure that there is access for every part of the state to the vaccine,” Ezike said.

Pharmaceutical company Moderna could seek emergency approval for its COVID-19 vaccine application with the FDA by the end of the month, Slaoui said.

Unlike the vaccine under FDA review from Pfizer, Moderna’s vaccine can be shipped and stored long-term at standard freezer temperatures of 4 degrees below zero, for six months.

During Monday, Nov. 23, news conference, Ezike said the government has already provided the state with about 8,500 doses, and that the treatment is meant to be given early in the infection to help prevent hospitalization for high-risk and older individuals.

“We have teams that are working right now to discuss the equitable distribution of this very important resource. We are going to make sure that, in terms of communication, the public is aware of this resource and who are the appropriate candidates,” she said.

Positivity rate drops, but officials urge caution ahead of Thanksgiving