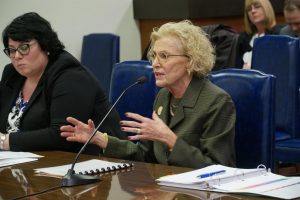 Illinois Supreme Court Chief Justice Anne Burke testifies during a hearing March 4 at the Capitol in Springfield. On May 20, Burke and other chief justices issued guidance on how district courts may resume in-person proceedings beginning June 1. (File photo by Lee Milner of Illinois Times)

SPRINGFIELD — Illinois’ 24 chief judges can decide when to reopen courthouses across the state to in-person proceedings, the state Supreme Court ordered Wednesday, May 20.

Each circuit is encouraged to continue holding remote hearings as frequently as possible, an extension of the highest court’s previous guidance. But beginning June 1 and in consultation with local health departments, courthouses may hold jury trials, lawsuit arguments and other actions in a courtroom.

The Supreme Court’s plan is independent of Gov. J.B. Pritzker’s regional Restore Illinois plan, and gives reopening authority to the head of Illinois’ 24 judicial circuits. Schedules in each district should be flexible, according to the order and guidance from chief justices, because “local conditions may change.”

“The court realizes that the health crisis is not over, but we must advance justice in a safe and organized manner,” Chief Justice Anne Burke said in a statement.

Restrictions implemented to combat the COVID-19 pandemic and “significant levels of backlogged cases” present an obstacle for “most courts for the foreseeable future,” the Supreme Court wrote in its guidance.

In a news release, the Supreme Court said “each jurisdiction is uniquely positioned” to address those changes and other obstacles created by COVID-19. For many judicial jurisdictions, that reopening process will be “slow” and many courthouses will “immediately face” challenges.

During the pandemic, the judicial branch of government has used technology not usually embraced by the courts.

“Whatever the new ‘normal’ brings, a silver lining for the judicial branch is the culture shift in the effective use of video conference technology and remote work capacity,” the justices wrote in the guidance.

Strategies for in-person proceedings should be made in consultation with local health departments, according to the guidance.

Officials may recommend foot traffic patterns to ensure social distancing, place tape on floors to indicate safe distances for court visitors to stand, and evaluate where court personnel should be positioned. Judges should also limit how many people are in buildings at once.

The Supreme Court advised hand sanitizing stations and Plexiglas germ shields be in place throughout courthouses and that there be more frequent cleanings. Justices also ordered face coverings be mandatory, and entry refused to those who refuse to wear one.