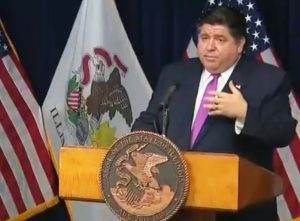 Gov. J.B. Pritzker says during a news conference Saturday, May 2 in Chicago that the increased number of cases of COVID-19 in Illinois is directly a result of increased testing. (Credit: blueroomstream.com)

“It really is a function of doing more testing,” Gov. J.B. Pritzker said of the increased positive case count at his daily briefing on the virus Saturday.

But the state reported another 15,208 test results, meaning about 16 percent of those resulted in positive cases. That number has gone down in recent weeks from a consistent appearance in the 20s to more frequently appearing in the teens. They had spiked, however, in the two day prior to Saturday.

There have been just less than 300,000 tests conducted in Illinois since the outbreak began, and the state has tested more than 10,000 residents daily for more than a week.

“We’re doing more and more testing, that is a very good thing,” Pritzker said. “It’s a very good sign, because more testing leads us to be able to keep more people at home who may have come in contact with those people so that we can have fewer infections across the state rather than more.”

There were also 105 more deaths related to the virus reported in the past 24 hours, and 4,717 COVID-19 patients were still hospitalized as of midnight Friday, according to Illinois Department of Public Health Director Dr. Ngozi Ezike. There were 1,250 COVID-19 patients in intensive care beds and 789 on ventilators as of midnight as well, according to IDPH.

Those numbers are either still ticking upward or in a state of plateau in various areas, Pritzker said, and they are more telling than the total test count.

“As we’ve been talking about flattening and bending the curve, you know, as I have indicated, we’re still going up by a little bit (in hospitalization numbers)… maybe you would call that flat,” Pritzker said. “But whatever you would call it at the moment, we’re not going down. And that’s what we really need to do.” 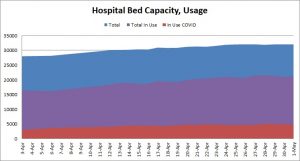 The graphic shows the state’s hospital bed capacity over time from the beginning of April to May 1. Data from IDPH. (Credit: Jerry Nowicki of Capitol News Illinois

The state’s R-naught number, characterizes a disease’s infectiousness by tracking how many people one carrier spreads it to, is roughly 1.2 at the moment, Ezike said. That’s down from higher than three, and Pritzker has said a goal is to get the number below one.

“The point is that it definitely came down,” Ezike said. “Again, thanks to the mitigation strategies because people work so hard to stay at home and to help limit the transmission of this virus. And so we’re very proud that it came down. And, you know, we hope that it’s not going to see a significant rise as people, if people change their behavior.”

Pritzker said he weighs the costs of his stay-at-home order on livelihoods and economic activity against the risk to public health as hospitalization numbers grow even outside of Cook and collar counties. He said the state also listens to guidance from the U.S. Centers for Disease Control and Prevention.

“So we’re weighing them, I know there’s no doubt I want people to get back to work and trying to find safe industries, safe ways to get people back into their jobs, whether they work in an office, a factory, a food processor or a restaurant or bar,” he said. “These are all things that we’re trying to weigh in the mix. And again, there’s a lot of factors to consider as we’re trying to reopen the economy.”

“And we know that congregate care settings are difficult in terms of two people being to a room … maybe sometimes several hundred people in a fixed location. So by its nature, it’s very challenging,” Ezike said in response to a question about long-term care facilities. “And if people want to have their loved ones at home and are able to take care of their loved ones, there’s no restriction on that at all.”

The state has limited visitors at nursing homes since February, Ezike said, and there is strict testing for any employee or resident of a home exhibiting symptoms of the virus. She said the state is still trying to identify hotspots at long-term care facilities earlier as testing increases. 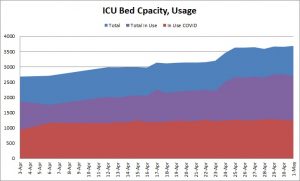 The graphic shows the state’s intensive care unit bed capacity over time from the beginning of April to May 1. Data from IDPH. (Credit: Jerry Nowicki of Capitol News Illinois)

“So all of that put together is how we’re trying to curb,” she said. “We know that we can’t … prevent all cases, but if we can mitigate, try to prevent as many as we can, that’s what we’re doing going forward.”

Ezike also stressed that it’s important to continue statewide mitigation strategies such as social distancing, but she said it is also important to get physical exercise, such as taking walks outside.

“Let’s think about how we can stay physically active safely, while socially distancing, wearing masks, so that we can take care of both our physical, mental and emotional health,” she said. “I know it’s been hard on everyone, and I’m encouraging everyone to continue to do their best to keep the people of Illinois safe.”

Pritzker said it is also important to keep an eye out for domestic violence as more people are homebound during the pandemic.

He said anyone needing help can call the Illinois domestic violence helpline at 1-877-863-6338.