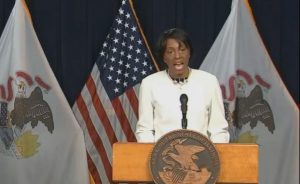 Illinois Department of Public Health Director Dr. Ngozi Ezike speaks at a daily COVID-19 briefing in Chicago Tuesday, April 14. She announced 74 more deaths from the virus in the past 24 hours. (Credit: BlueRoomStream)

SPRINGFIELD — The percentage of intensive care beds and ventilators in use in Illinois remained relatively flat since last week as state officials on Tuesday, April 14 announced another encouraging sign that Illinois is “flattening the curve” in dealing with the novel coronavirus disease, or COVID-19.

However, that and the fact the number of virus-related deaths are doubling every 5.5 days now — as opposed to every 2.5 days at the beginning of April — does not mean there are immediate plans to lift a stay-at-home order that’s been in place since March 21.

“Of course you need to continue to stay home,” Illinois Department of Public Health Director Dr. Ngozi Ezike said. “We keep talking about flattening the curve. The reason that the doubling time is prolonging is because of these measures that have been dictated and that have been followed.”

Gov. J.B. Pritzker’s stay-at-home order is scheduled to continue through at least April 30. On March 22, COVID-19 cases were doubling every two days, as opposed to approximately 8 days as of April 12, according to the governor’s office.

“To be clear, there is nothing good about twice as many people having this virus — or worse, dying from it — no matter how long it takes,” Pritzker said. “But we won’t get to zero cases overnight. The fact that our doubling rate continues to increase in every metric is a clear demonstration that there is a deceleration of virus transmission.”

On Tuesday, the state announced 1,222 new confirmed cases of the disease over the previous 24 hours, including 74 additional deaths. That brings the total number of cases recorded in Illinois to 23,247, including 868 fatalities. The recent deaths came in 11 counties from northern to southern Illinois, and the virus is now confirmed in 88 of Illinois’ 102 counties.

“These numbers are indicators of our growing ability to manage capacity within the healthcare systems across Illinois,” Pritzker said. “We need to stay the course for our efforts to remain effective.”

Still, the governor said, “this curve may not flatten, and it may go up again, if we don’t adhere to the stay-at-home order.”

Pritzker echoed his comments from several briefings prior in saying the reopening of the state’s economy will be reexamined each day when more information is available. He also noted that he has talked with neighboring governors about presenting a united front when they eventually, gradually reopen sectors of the economy.

“Our goal, of course, for this is to start to think about, you know, what are the preconditions for beginning to allow certain kinds of businesses to open their doors again, to expand the definition of those who can work or those businesses that can have their doors open,” he said.

The preconditions, the governor said, are widespread testing, tracing those who have contacted people with confirmed cases and being able to treat the virus. It remained unclear Tuesday how long it will take for states or the federal government to largely address those issues, as Illinois has tested 110,616 people for the virus, an increase of just 4,848 from Monday.

That’s far short of the state’s goal of testing 10,000 daily, which would allow adequate tracking of the virus, according to experts.

On the tracing front, Pritzker said the state is looking at what Massachusetts is doing in establishing a “case tracing collaborative” using “good old-fashioned shoe leather to make sure and call every single person that may have come in contact with somebody who has COVID-19.”

As there’s currently no treatment for the virus and a vaccine is likely at least one year away, officials said the treatment aspect is up in the air as well.

“So there are multiple different treatments that people are trying off label — off label means that there is a medicine that’s approved for a different cause but is now being tried for COVID-19 patients,” Ezike said, adding that there would have to be random, large-scale trials to test certain drugs before they can gain U.S. Food and Drug Administration approval.

“In terms of what recommendations are officially put out are usually based not on anecdotes, but more so on trials and the results of trials,” she said. “And so we’re looking forward to getting some of those results of some trials that might be going on.”

Pritzker said it will also be important to have widely available personal protective equipment for those that have public contact upon reopening of the economy.

Pritzker said he speaks with the leaders “all the time” individually and would be open to a digital meeting with the four leaders.