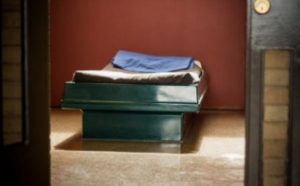 Two more detainees at the Cook County Juvenile Temporary Detention Center have tested positive for the coronavirus, it was announced April 27.

The Office of Chief Judge of the Circuit Court for Cook County said April 27 that neither resident was exhibiting signs of illness.

“They were tested under current protocol that requires all new JTDC admissions to be tested after their first court appearance and remain in an area separate from the general population for 14 days,” said Pat Mikhizer, director of communications for the Office of the Chief Judge. “Consistent with (U.S. Centers for Disease Control) guidelines, the two residents have been placed in medical isolation for 14 days in the medical unit.”

Eight employees at the Juvenile Detention Center have also tested positive for COVID-19.

The 170 residents at the JTDC as of Monday was a decline from 210 on March 15. From March 16-April 25, judges released 190 residents from the JTDC. In that same time period, 145 residents were admitted to the JTDC after arrest. In addition, judges have granted release to 10 of the 170 residents, but they remain in custody because they are awaiting residential placement by the Illinois Department of Children and Family Services.

At the JTDC, surfaces in the facility are subject to routine cleanings and disinfection, Mikhizer said.

“Deep cleanings are also performed in areas as needed. Nancy B. Jefferson Alternative School is closed pursuant to the governor’s order,” Mikhizer said. “JTDC residents are learning via instructional packets provided by Chicago Public Schools. JTDC residents continue to participate in cognitive-behavioral therapy behavior management and exercise/recreation activities; and they may participate via video in programs that focus on health, music and artistic expression.”

Mikhizer said that family and special visits have been canceled, but residents are permitted to have videoconferences and phone calls with family members. Medical and mental health services continue to be provided. Juveniles appear in court remotely via video from the JTDC.

Social distancing is used during meals, schoolwork, television viewing, movement through the facility and outdoor recreation in the secure area whenever practicable, according to Mikhizer. Staff are instructed to stay six feet from each other; and all employees are provided masks that they are required to wear during their time in the facility. Employees who work in areas with newly admitted residents are wearing N95 masks, eye protection, gloves, and gowns, according to the Office of the Chief Judge. Employees exhibiting signs of illness are not permitted to work; and employees have been provided information regarding where, as first responders, they may receive COVID-19 tests, Mikhizer said.

Anyone who seeks to enter the JTDC receives a temperature check and answers screening questions to indicate potential exposure to COVID-19, according to the Office of the Chief Judge. Individuals who do not successfully complete the screening are not permitted to enter.

With Monday’s announcement, there are a total of 23 employees who have tested positive for COVID-19 who work under the auspices of the Office of the Chief Judge.