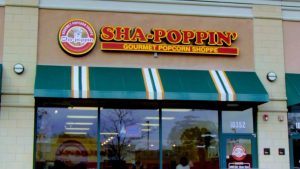 The owner of Sha-Poppin Gourmet Popcorn in Westchester has filed a class-action federal lawsuit against JPMorgan Chase and some of its high-profile clients over actions that allegedly created a Chase “fast lane” for the Payroll Protection Program loan applications of preferred clients. (Sha-Poppin Facebook photo)

A small-business owner in the near-west suburbs of Chicago wants to send a message to big banks and their big-name clients.

Stacy Hawkins Armstrong, the owner of Sha-Poppin Gourmet Popcorn in Westchester, has filed a class-action federal lawsuit against JPMorgan Chase, Ruth’s Chris Steak House and Phunware for their “efforts to cheat (Sha-Poppin) and countless small businesses out of their right to apply for and receive federal stimulus funding in a moment of national crisis.”

When Congress approved $349 billion in Payroll Protection Program loans, it was intended for small-business owners to meet payroll obligations.

“Chase, however, saw an opportunity to help its established and better-heeled clients by helping them break a rule ingrained in virtually all Americans since preschool: no line-cutting,” Hawkins Armstrong’s lawsuit contends.

Hawkins Armstrong, a Chase customer, said she was impeded in applying for a PPP loan through Chase and, at one point, was implicitly encouraged to seek a loan elsewhere. The small-business owner ultimately received a far-smaller loan than she would have otherwise received if Chase had put the loan through initially.

The lawsuit contends that Phunware is a multimillion-dollar vendor for President Trump’s re-election campaign. Ruth’s Chris, the lawsuit states, generates $450 million in annual revenue from its 150 nationwide locations, including three in Illinois.

“To put this in context, the $20 million Ruth’s Chris received could have instead funded $25,000 loans to 800 actual small businesses,” said Ari Sharg of Edelson PC, attorney for Sha-Poppin.

Ruth’s Chris has announced it will return the $20 million.

Phunware got a $3 million PPP loan approved just two days after submitting its application through Chase, the lawsuit contends.

“In the 24 hours prior to the April 3 window opening, leaders of Chase’s retail bank hosted a nationwide conference call to provide workers with directions on how to handle customers, and to discourage branch employees from getting involved in customers’ PPP loan applications,” according to the lawsuit. “As a result, Chase’s favored customers (as well as its parent company’s favored customers) got the special treatment they desired.”

Chase allowed certain preferred clients to cut in line and simultaneously “Chase discouraged and/or put stumbling blocks in front of otherwise qualified applicants who were not in Chase’s orbit and favor,” Hawkins Armstrong’s lawsuit contends.

The small-businesswoman employs five people, including herself, in her Westchester shop.

“The possibility of obtaining a PPP loan gave Sha-Poppin a ray of hope,” the lawsuit contends. “And fortunately for Hawkins-Armstrong — or so she believed — Sha-Poppin already held a small-business account with a major SBA-approved lender at the time the program was enacted: Defendant Chase.”

But little did she know, her lawsuit contends, that Chase chose to “create a ‘fast lane,’ for its favored commercial clients.”

The stress and strain of not being able to get her loan application to go through the Chase portal caused Hawkins-Armstrong to break out in hives, the lawsuit states, and required that she takes steroids to stop the outbreak.

She said she was eventually able to secure a $6,000 PPP loan — one-quarter of what she was initially seeking at Chase — from Seaway Bank.

Because Hawkins-Armstrong accepted the $6,000 loan, she was disqualified from applying in round 2 of the loan program, the lawsuit states.

The Westchester business owner said she would have used the full $25,00 she was seeking to pay employees and the rent on her brick-and-mortar location for two months.

“Instead, as a result of defendants’ actions, Sha-Poppin is now at a severe risk of having to lay off its employees and shutter its business — the very result Congress sought to avoid in creating a first-come, first-served loan program to be deployed by SBA banking partners with all deliberate speed,” the lawsuit states.

Hawkins-Armstrong’s lawsuit contends that “Chase’s concealment was a win-win for the company: it could curry the favor of its privileged, favored commercial clients by processing their PPP applications quickly and diligently, and then, to the extent the PPP fund had not yet run out, process everyone else’s applications afterwards.”

Sha-Poppin is seeking a jury trial for the case.