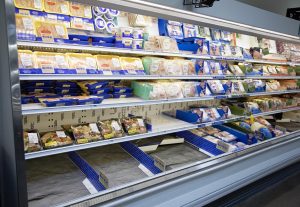 Keeping the shelves stocked like this one at a grocery in Bloomington is becoming more difficult as COVID-19 outbreaks and shutdowns at some U.S. processing plants have begun disrupting the meat supply chain. “When one section of the supply chain has a slowdown or complete shutdown, it bottlenecks the rest of the system,” Illinois Farm Bureau President Richard Guebert, Jr. said.(Credit: Illinois Farm Bureau)

SPRINGFIELD – The meat supply chain, which was running at full capacity at the start of the COVID-19 pandemic, is now taking a hit as the disease infects plant workers and threatens the livestock industry’s ability to keep up with high demand.

The spread of coronavirus through employees at some of the nation’s largest meat plants could slow the flow of food, depending on how long plant closures last. At the same time, other plants that normally supply the food service industry with larger quantities of food are not equipped to distribute smaller packages suitable for grocery stores.

“When one section of the supply chain has a slowdown or complete shutdown, it bottlenecks the rest of the system,” Illinois Farm Bureau President Richard Guebert, Jr. said. “With highly perishable products like milk or vegetables, the bottleneck is slowing down the process longer than the items have in shelf life.”

One of the nation’s largest pork processing plants, a Smithfield Foods facility in Sioux Falls, S.D., shut down earlier this month because of a COVID-19 outbreak, taking 130 million weekly servings of food out of the supply chain. The closure also idled plants in Missouri and Wisconsin that rely on the Sioux Falls plant’s raw materials.

“That just creates a bottleneck for all the other packers, because they try to move those hogs to their other facilities,” she said.

Of the three major pork facilities in Illinois, one is operated by JBS in Beardstown and another, in Monmouth, is operated by Smithfield Foods. The third major facility in the state is the Agar-operated Rantoul Foods in Rantoul.

While Tirey said the plants are experiencing disruptions, they remain in operation. There were, however, three employees at the Monmouth plant who tested positive for COVID-19 last week.

Tirey said the bottlenecked supply chain dropped the number of pigs processed in the U.S. on Monday to 370,000, down from 415,000 only a couple days before.

“Just losing those couple processing plants in neighboring states brings the overall total down,” she said.

Tirey added, though, that she does not expect the amount of pork in supermarkets will decrease, for now. Instead, she said, shortages at supermarkets should be attributed to consumers’ heightened demand for meat.

Tirey also said that Illinois pork plants, including the one in Monmouth, have stepped up their safety protocols, including social distancing, daily temperature checks for employees and requiring workers to wear personal protective equipment (PPE).

Meanwhile, farms in some parts of the country have an oversupply of their products. The inability to bridge the gap between farmers growing produce, milk and meat with the growing number of needy consumers has not been from a lack of trying, Guebert said.

County Farm Bureaus in six northern Illinois counties donated $5,000 worth of milk – nearly 2,000 gallons – to 30 food pantries in those counties.

And the American Farm Bureau Federation is working with the U.S. Department of Agriculture to purchase products from farmers who have lost other markets during the pandemic and redirect them to food banks.

“It isn’t that the food isn’t there,” the Illinois Farm Bureau’s associate director of food systems development, Raghela Scavuzzo, said. “What we are facing is a readjusting of the distribution system. That takes time. More time than any of us would like.”

Guebert said farmers would prefer to donate their products to those who need them rather than dispose of them on the farm. But food pantries’ capacity to store products with short shelf lives is limited.

“It’s heartbreaking for farmers whenever they’re forced to dispose of products,” he said. “Many farmers do not know where their income is going to come from during this time, but believe me, they would rather find a home for these products.”

Many food banks are based on repackaging bulk loads of products into smaller amounts to be distributed individually. But the volunteer base that performs that work has largely dried up because of social distancing guidelines.

Other barriers stand in the way of getting meat and dairy products from farm to fork.

The facilities that package eggs, milk and cheese, for example, are set up to distribute more than half of those products to food service sectors. Eggs are typically delivered in either liquid form or in 15-dozen quantities. Cheese might be delivered to a pizzeria in 10-pound bags, not the 8-ounce bags a shopper would buy at the grocery store.

And large amounts of milk would ordinarily be packaged in half-pint cartons for students eating lunch at school, not the gallon jugs that have been subject to rationing at many supermarkets.

“Approximately 60 percent to 65 percent of product from farms typically goes into the food service industry – restaurants, hotels, schools and cafeterias,” Scavuzzo said. “The way in which these businesses purchase food is very different than what goes into a retail space or what the food banks are needing due to their labor barriers.”

Some relief is coming to farmers struggling from low demand, supply chain crises and low prices after the federal government on Friday announced a COVID-19 agricultural aid package. The USDA will provide $16 billion in direct payments to farmers and ranchers, including $9.6 billion for the livestock industry.

Producers will be compensated for 85 percent of price losses from Jan. 1 through April 15. Compensation will then decrease to 30 percent of prices losses through the next two quarters.

The USDA says another $873 million will go toward purchasing agricultural products to be sent to food banks. This is on top of $600 million of previous COVID-19 relief money set to food banks to purchase food.