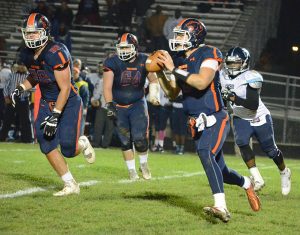 Friday night football under the lights — as demonstrated in this 2011 game between Oswego and Lake Park — will be different in the 2020-21 school year as the Illinois High School Association shifts the sport to spring. (Photo by Al Benson)

High school football, soccer and girls volleyball will move from their traditional fall seasons to an unprecedented spring schedule under a plan announced Wednesday, July 29 by the Illinois High School Association.

The 11-member IHSA board of directors ended a suspension of activities that began late last winter as the COVID-19 pandemic eventually shuttered schools.

“This plan, like nearly every aspect of our current lives, remains fluid,” said IHSA Executive Director Craig Anderson in a statement following the special board meeting in Bloomington. “Changes may come, and if they do, we will be agile while putting safety and students first. It was important that we provide a framework today for our student-athletes, coaches, administrators, and officials to begin preparing for the 2020-21 school year.”

Other fall sports — boys and girls golf, girls tennis, cross country and girls swimming and diving — will proceed as scheduled but with limitations. That schedule will run from Aug. 10 to Oct. 24.

No formats or dates for state championships were announced and the plan still must be reviewed by the Illinois Department of Public Health.

The changes come along with new restrictions announced by Gov. J.B. Pritzker on broader youth and adult recreational sports at a morning news conference in Chicago, with the governor calling it a “situation where the toughest choice is also the safest one.”

The guidelines, which classify sports in three tiers of risk based on the likelihood that participation in the sport increases coronavirus transmission, pertain to school-based sports, travel clubs, private and recreational leagues, and park district sports programs.

and diving and tennis and could proceed, according to Pritzker.

“Whether this year is their first time on the court or it’s their senior season – this isn’t the news anyone wants to hear,” said Pritzker. “But with rising rates of spread of the virus, with rising positivity rates throughout Illinois and the United States, this is a situation where the toughest choice is also the safest one.”

The new guidance from IDPH is effective Aug. 15 and applies to all youth and adult recreational sports (including school-based sports) plus travel clubs, private leagues and clubs, recreational leagues and centers, and park district sports programs. 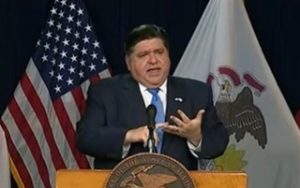 Gov. J.B. Pritzker responds to questions from the news media during a COVID-19 briefing in Chicago on Wednesday, July 29 in which he announced new guidelines for youth sports. (BlueRoomStream.com)

It does not does not affect professional or college sports.

Several hours later, the IHSA announced its plans following the board meeting in Bloomington.

Under the plan, football, boys soccer and girls volleyball seasons would now be conducted between Feb. 15-May 1.

“The board believes this plan offers the most realistic chance for student-athletes to participate in interscholastic sports while balancing the challenges of a new academic setting and IDPH Guidelines,” said Tim McConnell, Erie High School principal and IHSA board president. “We are an education-based athletic association, and school has to come first. By delaying most of the team sports in the fall, it will allow our schools and students the chance to acclimate to what will be, for many, a totally new educational experience. We will do our best to try to give every student-athlete the opportunity for a season this school year.”

The IHSA, an association of member public and private high schools, oversees 14 boys sports, 15 for girls and eight non-athletic activities from bass fishing to drama and speech to an academic Scholastic Bowl.

The decision by the IHSA and the announcement of the new sports guidelines came as the Illinois Department of Public Health reported another 1,393 confirmed cases of the virus among 38,187 tests completed in the previous 24 hours. That accounted for a one-day positivity rate of 3.6 percent, which kept the rolling seven-day rate for the state at 3.8 percent.

At the end of Wednesday, there were 1,491 COVID-19 patients in Illinois hospitals, an increase from the previous day.

“These are clearly indicators that we are headed in the wrong direction,”  IDPH Director Dr. Ngozi Ezike said at the news conference.

“This virus remains dangerous to kids, and parents, and grandparents, and teachers, and coaches, and for right now, this is the best thing that we can do for the health and safety of our families under the current circumstances,” Pritzker said.

Many school districts have already adopted a hybrid approach to learning for the fall, including a split between classroom learning and on-line education.  Others will be strictly online.