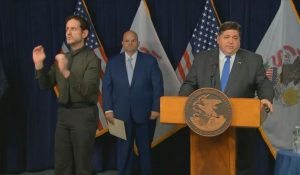 Gov. J.B. Pritzker speaks Monday, March 23 during a news conference in Chicago to discuss the state’s latest efforts to combat the outbreak of the novel coronavirus in Illinois. (Credit: blueroomstream.com)

SPRINGFIELD — Gov. J.B. Pritzker detailed the state’s efforts to stock up on personal protective equipment and said President Donald Trump was “responsive” to the state’s needs in a phone call Monday, one day after the pair feuded on Twitter.

During his daily COVID-19 briefing in Chicago, the governor also announced a new partnership with the manufacturing and biotech industries in the state to produce needed supplies and called for donations of personal protective equipment, or PPE.

“My administration continues to work day and night to scour the globe in the global supply chain,” Pritzker said of the hunt for medical supplies needed to deal with COVID-19.

The three new deaths came in Cook County in two men in their 80s and a man in his 90s.  Monroe County reported its first case, meaning the virus has been confirmed in 31 counties, although experts urge all Illinoisans to assume the virus has already reached their community.

Pritzker said as the state tries to ramp up its preparation efforts in terms of supplies, it is working with in-state manufacturers and trying to purchase supplies on the marketplace. In an effort to bid for ventilators, Pritzker said Illinois was competing with the federal government. In another case, it was bidding against other states and other countries.

“It’s the federal government’s job to make sure that cash strapped states are not paying more than they should have to pay for supplies, that we are not watching prices go up by the hour, because we’re competing against one another, yet for the common good,” Pritzker said at the briefing.

He said the first shipment of medical supplies from the federal government came on March 12, and a duplicate order came on March 20, but the two shipments combined equaled only a fraction of the state’s request.

He said the state also requested 4,000 respirators but received none.

He said the state made another request for hand sanitizer, sanitizing wipes, gowns, goggles and meals ready to eat, but the March 20 shipment the state received contained the same size shipment it received March 12 without any of the other items.

Pritzker said he spoke to Trump around noon Monday and the president was “very responsive.” He said he talked to Trump about a need for masks and ventilators, and noted he has called on the president to use the National Defense Production Act to make the federal government a single purchaser for the necessary equipment rather than having states bid each other up. 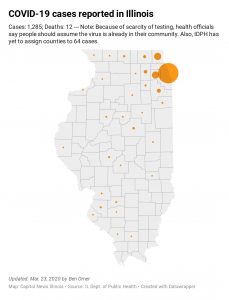 “The president was very responsive, frankly … he didn’t so much like the idea of invoking the Defense Production Act, but he did say, you know, ‘What do you need? Let me see if I can get that for you,’” Pritzker said of the call.  “It seems like he’s being very responsive to what I asked for. And I hope that we’ll be able to receive those items in relatively short order.”

The pair spoke hours after Pritzker’s Monday morning appearance on “Good Morning America” and struck different tones than they did Sunday on Twitter when they traded barbs.

“Fighting for our state through this pandemic is neither a Republican nor Democrat issue,” Durkin said in a statement. “We share a common enemy and share the same goal of working together to eradicate COVID-19. As in all emergencies, time spent on blame or fault provides little or no merit nor solutions. Despite the challenges, the time is now and we must be vigilant and united to defeat this virus.”

Per the partnership with the Illinois Manufacturers’ Association and the Illinois Biotechnology Innovation Organization, or iBIO, some companies will begin manufacturing products ranging from medicine and therapies, N95 masks, gloves, gowns, ventilators and sanitizer and other medical equipment.

Pritzker said some facilities would be repurposed to manufacture needed equipment and all would meet social distancing and other guidelines.

“While the task is daunting, manufacturers stand ready to once again answer our nation’s call, conquering obstacles and leading the way forward,” said Mark Denzler, IMA president and CEO. “The Illinois Manufacturers’ Association and the 592,000 women and men working on factory floors across our state are proud to support Governor JB Pritzker’s efforts to combat and contain this virus, producing life-saving products in desperate need across Illinois.”

The IMA and iBIO are also organizing medical supply donation programs, and the Illinois Emergency Management Agency will direct donated supplies to the health care and emergency response providers across the state with the most need.

“I would also like to make a direct ask to the owners of tattoo parlors and nail salons and elective surgery centers and other facilities temporarily closed during this crisis, to contact my administration about their stores of PPE,” Pritzker said.

Pritzker said those looking to donate PPE can email the administration at ppe.donations@illinois.gov.

Pritzker also noted that the state’s unemployment claims website is on a new platform designed for increased demand. He encouraged those affected by COVID-19 to apply for unemployment online rather than by phone at https://www2.illinois.gov/ides/Pages/default.aspx.