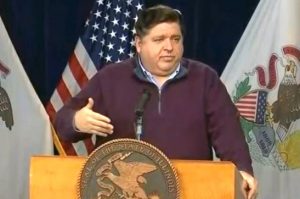 SPRINGFIELD – As state leaders continue to face pushback from the restaurant industry and even some county and municipal governments regarding COVID-19 mitigation measures, Gov. J.B. Pritzker on Tuesday, Nov. 3 put pressure squarely on the shoulders of local elected officials.

“The fact is that local officials who are not doing the right thing are the ones who are going to be responsible for the rates of infection going through the roof, and our hospitals getting overrun and people are dying if they don’t enforce the rules,” Pritzker said during his daily briefing in Chicago. “That is why those rules exist.”

Beginning Wednesday, Nov. 4, all 11 regions of the state’s reopening plan will be under enhanced mitigation orders to control the spread of the virus because they have seen sustained periods of test positivity rates over 8 percent and, in some cases, dangerously rising hospitalization rates. The last region to cross those thresholds was Region 2, in west-central Illinois, where the enhanced mitigation measures take effect Wednesday.

Those mitigations include closing bars and restaurants to indoor service as well as limits on the size of public gatherings and social events.

But the restaurant industry has pushed back hard against the orders, arguing there is insufficient data to show that bars and restaurants have been a significant source of virus spread in Illinois. Those establishments went through several weeks of mandatory closures during the early phases of the pandemic, and they say another extended period of closure will force many of them out of business permanently.

Officials in Springfield and Sangamon County announced Tuesday that they will take a “phased approach” to enforcing the orders, starting with limiting indoor seating at bars and restaurants to 25 percent of the establishment’s capacity.

That announcement came on the same day the Illinois Department of Public Health announced that 3,594 people in the state were being hospitalized with COVID-19, the largest number since May 28. IDPH also reported Tuesday that 6,516 new cases of the disease and 68 virus-related deaths had been confirmed over the previous 24 hours.

In Region 3, which includes Springfield, the test positivity rate stood at 10.6 percent on Oct. 30, the most recent date for which numbers were available.

“We know that that the places that are remaining open, they’re having large gatherings and defying these rules are, in fact, spreading locations,” Pritzker said. “These are places that are amplifying the virus across the state. And so, you know, when you’ve got double-digit positivity rates in your area, as is the case in Springfield, then the local officials need to take the laws that are on the books and the regulations that we’ve put forward and the orders that we’ve asked people to follow and enforce them locally.”

As the number of COVID-19 cases continues to rise throughout the state, Pritzker used his Nov. 3 media briefing to encourage Illinoisans who do not have health insurance coverage through their employer or Medicaid to sign up for subsidized coverage through the state-run marketplace under the Affordable Care Act, also known as Obamacare.

Open enrollment in that program began Monday and runs through Dec. 15.

“Since its passage in 2010, the ACA has been an invaluable asset in Illinois’ fight to provide health care to all residents of the state,” Pritzker said.

People can also access a special enrollment period if they formerly had employer-based coverage but lost their job for any reason, Pritzker said.

The ACA plans offer discounts in the form of tax credits for people who qualify based on their income. According to the Illinois Department of Insurance, more than 240,000 Illinois residents received those discounts last year.