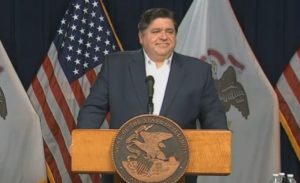 Gov. J.B. Pritzker addresses reporters at his daily COVID-19 briefing Tuesday in Chicago. Pritzker said the state is remaining about level in its use of ICU beds and ventilators as compared to last week. (Credit: BlueRoomStream)

SPRINGFIELD — More evidence emerged Tuesday, April 14 that the spread of COVID-19 in Illinois appears to be leveling off, although Gov. JB Pritzker urged people to continue taking precautions to prevent a resurgence of new cases.

Pritzker made his comments as the Department of Public Health reported 1,222 new confirmed cases of the disease over the previous 24 hours, including 74 additional deaths. That brings the total number of cases recorded in Illinois to 23,247, including 868 fatalities, in 88 counties.

“At some point we will have fewer cases to report and fewer lives lost. That will be good news,” the governor said during his daily briefing in Chicago. “But it doesn’t change the fact that each and every life that we lose to this virus is an immense tragedy. May each and every one of their memories be for a blessing.”

One statistic Pritzker highlighted is the “doubling rate,” or the number of days it takes to double the number of hospitalizations or deaths.

On March 22, he said, the number of new positive test results was doubling about every two days. As of
Sunday, April 12, that doubling rate had been extended to 8.2 days, meaning the spread of the disease has been slowing.

Similarly, at the beginning of April, the daily mortality rate was doubling about every 2.5 days. That doubling rate is now about 5.5 days.

Pritzker also said that as a result of efforts to increase the state’s hospital capacity, COVID-19 patients are now occupying a smaller percentage of available intensive care unit beds. One week ago, he said, the percentage of ICU beds occupied by COVID-19 patients had increased from 35 percent to 43 percent. But as of Tuesday, that rate dropped to 40 percent.

“To be clear, there is nothing good about twice as many people having this virus, or worse, dying from it, no matter how long it takes,” Pritzker said. “But we won’t get to zero cases overnight. The fact that our doubling rate continues to increase in every metric is a clear demonstration that there is a deceleration of virus transmission.”