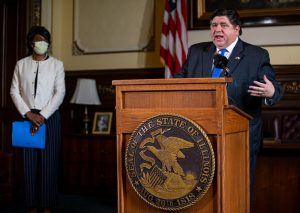 Gov. JB Pritzker and Dr. Ngozi Ezike, director of the Illinois Department of Public Health, brief the media Friday on the state’s COVID-19 pandemic during a news conference in the governor’s office at the Capitol in Springfield. (Pool photo by Justin L. Fowler/State Journal-Register)

SPRINGFIELD – All of the state’s 5,000-plus child care providers not in operation will be advised to reopen Friday, May 29, provided the state’s four regions under Gov. J.B. Pritzker’s reopening plan continue to progress toward the third phase of the plan by that date.

Providers that have been closed must develop a reopening plan that ensures they have revised operational and preparedness policies in place before opening, the governor said. All providers will be expected to resume compliance with all licensing standards related to curriculum, learning environment and staff qualifications.

All four regions in Pritzker’s “Restore Illinois” plan are on pace to enter Phase 3 next week.

“We can’t have a conversation about going back to work without talking about childcare,” Pritzker said during his daily COVID-19 briefing from his Capitol office Friday. “If we don’t have child care, a large portion of the workforce, especially women, who too often bear a disproportionate burden, will be without any way to move forward without caring for their child themselves.”

Pritzker said for the first four weeks that they’re open, providers will be able to serve up to 10 children per classroom.

“Once they have provided care safely for four weeks and have gotten accustomed to the new health, social distancing and sanitation routines, they will be able to expand to larger group sizes, though not yet at their fully licensed capacity,” he said.

Pritzker called the plan a “cautious” approach as the scientific community collectively continues to learn about how the virus spreads.

He said the effort would bring Illinois to three-quarters of its pre-pandemic child care capacity. Since the initial stay-at-home order was signed in March, Pritzker said the state’s child care had been operating at “about 15 percent” capacity as about 2,500 child care homes or 700 centers remained open.

Under the new guidance for group child care settings, capacity would be “roughly 30 percent lower than their pre-pandemic levels.” For smaller licensed homes, most will be able to operate at “standard capacity.” Providers that have been operating as emergency child care providers can move immediately to these new maximum capacities when their region enters Phase 3.

The governor announced the plan as the state announced another 110 deaths related to COVID-19, bringing the total of virus-related fatalities to 4,715. There were another 2,758 confirmed cases among 25,113 persons tested in the past 24 hours. There are now more than 105,444 confirmed cases in 100 counties out of 697,133 specimens tested.

Hospitalization numbers remain relatively flat, as there were 3,928 people hospitalized with COVID-19 as of midnight Friday, with 1,060 of them in intensive care unit beds and 589 on ventilators. 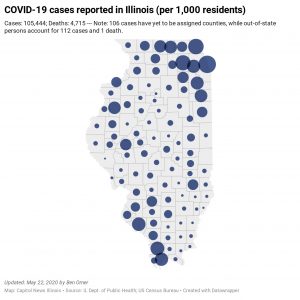 As Illinois prepares to enter Phase 3 of 5, Pritzker also addressed the potential of reopening religious institutions on the same day President Donald Trump deemed those facilities “essential” and called for mass reopenings.

“My team and I have received a lot of excellent proposals and ideas from different religious groups on how to safely expand their services,” Pritzker said. “From a broad standpoint, I can say that outdoor faith services, including but not limited to drive-in church services, will be welcomed in Phase 3. And we continue to collaborate with faith leaders to ensure that they can hold services in safe and creative ways that allow for worship, while protecting their congregants.”

When asked about Trump’s call for reopening, Pritzker encouraged faith leaders to stay the course in not holding mass religious gatherings indoors.

“We’re gonna continue to operate on the basis of science and data and I’m as anxious as anybody to make sure that our churches, our mosques, our synagogues open back to where they were before COVID-19 came along,” he said. “We’re gradually moving in that direction, but there’s no doubt, the most important thing is we do not want parishioners to get ill because their faith leaders bring them together.”

Pritzker also said he was looking for help from the General Assembly in terms of enforcing the stay-at-home order.

Pritzker’s administration withdrew an emergency rule this month that would have allowed for the filing of Class A misdemeanor charges against those who disregard his stay-at-home order amid opposition from lawmakers in a key committee. He said Friday he would be disappointed if lawmakers did not approve a measure to allow for lesser fines without misdemeanor charges if a business ignores his order.

He said the General Assembly “does not appear to want to raise and hold a vote on” such a measure.

“I mean the Legislature has been asking for months and months, they’ve wanted to come together, because they consider themselves, and they are, a co-equal branch of government, along with the judiciary branch and the executive branch,” he said. “And it is their obligation, frankly, to do their duty. They don’t seem to want to help in any way, dealing with the COVID-19 crisis, by offering us the ability to use a small enforcement mechanism that we’ve asked for.”

Dr. Ngozi Ezike, director of the Illinois Department of Public Health, said as Memorial Day weekend approaches, it’s important to continue to take precautions to ensure that Illinois remains on a pace to safely reopen.

“Although it’s unfortunate that we can’t throw a barbecue with 100 of our friends, I think it’s clear why we are in that situation,” she said. “And I know that you’re doing your part to make sure that we will get to celebrations so that we can celebrate with more normalcy in the future.”