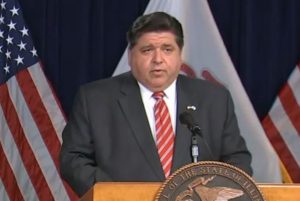 SPRINGFIELD – Gov. J.B. Pritzker and other public health officials warned Wednesday, Sept. 2 of the danger of spreading COVID-19 during social gatherings as families and friends make plans for the upcoming Labor Day weekend.

“I am very concerned, as I was in the Fourth of July weekend, that people will be gathering as they often do (at) picnics, backyard barbeques, at gatherings,” he said. “And we know that much of the spread that’s occurring in Illinois is happening in these settings.”

Pritzker was joined at a news conference in Chicago by Dr. Amaal Tokars, assistant director of the Illinois Department of Public Health, who said that even small gatherings will have to be different this year.  He urged people to limit the size of gatherings, wear facial coverings even around close friends and family, and maintain social distances.

“So help us help one another, and let us make sure that when we are in social gatherings that are not too large, especially if they are small gatherings indoors, that we are also remembering to infuse these principles of hand-washing, masking up and social distancing,” she said.

Those pleas came as IDPH reported 2,128 new confirmed cases of COVID-19 in Illinois and 27 virus-related deaths over the previous 24 hours. That brought the statewide totals since the pandemic first appeared in Illinois to 238,643 cases, including 8,091 deaths.

Those new cases came out of 32,751 tests that were reported over the 24-hour period, a smaller daily number than the state had been reporting in recent weeks, which Tokars attributed to a technical issue in the data processing system that IDPH uses to report numbers publicly. But she said all people who have been tested are being notified of their results.

The relatively small number of tests and the large number of positive results made for a single-day test positivity rate of 6.5 percent. That brought the preliminary, rolling average positivity rate up by two-tenths of a point to 4.5 percent for the seven-day period from Aug. 26 through Sept. 1.

Pritzker noted that the only regions that have seen an actual decrease in their test positivity rates are Region 3, which stretches from Quincy to Springfield in west-central Illinois, and Region 6 in east-central Illinois, which includes Effingham and the Champaign-Urbana area.

At the end of Sept. 1, there were 1,596 people reported hospitalized with COVID-19 in Illinois, including 347 in intensive care units and 142 on ventilators. All of those numbers remain slightly above pandemic lows.