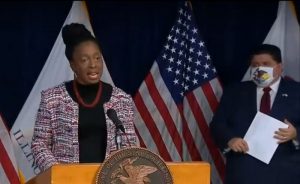 SPRINGFIELD – Two more of the 11 regions of the state’s COVID-19 mitigation plan have reached a threshold necessitating increased restrictions, joining two other regions which remain above the key metric.

Will and Kankakee counties in Region 7 and DuPage and Kane counties in Region 8 will be closed for indoor service at bars and restaurants and will see capacity limits of 25 people or 25 percent of maximum occupancy among other restrictions. The mitigations will take effect Friday, Oct. 23.

“Numbers throughout most of the regions are trending in the wrong direction,” Illinois Department of Public Health Director Dr. Ngozi Ezike said at a news conference Tuesday, Oct. 20 in Chicago. “If your region does have the implemented mitigation measures, please, let’s get on board and help our community to get back on track. It’s been done before – we did it together as a state to get to Phase 4 (of the state’s reopening plan). Let’s do what we can to progress further.”

She encouraged Illinoisans to get a flu shot to avoid further stresses on hospital systems, wear a face covering, keep a six-foot distance from others, wash hands regularly and keep to smaller groups.

The governor and health officials announced the mitigations as COVID-19 positivity rates remained on an upward arc in every region, including Region 1 of the reopening plan. That region, from Winnebago County to the state’s western border in northern Illinois, hit an 11.8 percent positivity rate — a new high — after its second week of increased mitigations.

Region 7 previously had mitigations in place from Aug. 27 to Sept. 18 after rising above 8 percent on Aug. 19 then falling to 5.2 percent on Sept. 28. After that, the rates began increasing in the region and statewide.

Asked why bars and restaurants continue to be hardest hit by economic restrictions, Ezike said they remain a key venue of spread, according to contact tracing efforts.

“When you look at the top three places that come up over and over, region to region statewide, it comes up as people’s workplace, it comes up as school, it comes up as restaurants and bars,” she said. “So, we’re not going to not have people go to school — we’re letting the local health departments and the school administrators decide for themselves what’s appropriate regarding school. And then in terms of workplace, there are people that… cannot work for home…. So, the next thing that we can actually act on is the bars and restaurants.”

Gov. J.B. Pritzker said guidance previously provided to schools by the Illinois State Board of Education should continue to be followed. That requires masking and six feet of distance.

Existing guidance for high school and recreational sports also remains in effect, while Pritzker said, “We are going to be very careful about whatever guidance gets issued for school sports for the winter.”

The governor also said he is not considering a statewide stay-at-home order.

The regions that will be subject to greater mitigations by the end of the week include 33 counties and more than a quarter of the state’s population. Other mitigations include a ban on party buses and closure of casinos and gambling venues at 11 p.m., among others.

Region 5 in southern Illinois, which will see increased mitigations starting Thursday, remained above the mitigation threshold at an 8.5 percent rolling positivity rate, decreasing from 9.1 percent the two days prior. Any region must remain below 6.5 percent for three days to have mitigations lifted.

Region 4 in the Metro East area on the Missouri border increased to 7.4 percent, Region 10 in suburban Cook County increased to 7.1 percent and Region 11, which consists of only Chicago, had the lowest positivity rate at 6.7 percent. Region 2, which includes Peoria and several surrounding counties, remained level from the day before at 6.9 percent, while Region 6 in east-central Illinois has been flat at 7.6 percent for four days.

On Tuesday, the state reported another 3,714 new confirmed cases of COVID-19 among 59,077 test results reported. Another 41 COVID-19 individuals died over the previous 24 hours, bringing the death toll to 9,277 since the pandemic began.

Hospitalizations also continue to increase, with ventilator usage jumping by 9 percent overnight as 195 ventilators were in use by COVID-19 patients as of Monday evening. While that left 77 percent of ventilators unused across the state, it’s the highest COVID-19 usage of the machines recorded in a single day since June 26.