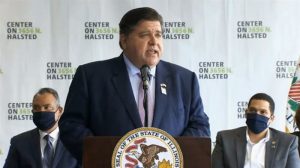 Gov. J.B. Pritzker speaks at a bill signing event in Chicago Tuesday, July 27 before taking questions from the media about potential changes to the state’s COVID-19 guidance. (Blueroomstream.com)

SPRINGFIELD – The state will have new COVID-19 guidance on face coverings after the U.S. Centers for Disease Control and Prevention updated its guidance Tuesday to reflect that even individuals vaccinated against COVID-19 should wear masks while indoors in areas of the country where the virus is surging.

CDC officials also recommended all teachers, staff, students and visitors in schools, regardless of vaccination status, should wear masks indoors as well, according to news reports covering an afternoon briefing by the federal agency. As of Tuesday afternoon, the full guidance had not been posted online.

The Illinois Department of Public Health announced it will adopt the CDC guidance after Gov. J.B. Pritzker had said he would review it during a news conference Tuesday afternoon.

Prior to Tuesday, Illinois had been following CDC guidance of the past two months which said unvaccinated individuals should wear masks indoors, but those who were vaccinated needed them only in certain settings, such as doctor’s offices and public transportation.

The Illinois State Board of Education had recently fully adopted CDC guidance as well, which strongly encouraged but did not mandate masks in schools.

But the Illinois Department of Public Health issued a news release later Tuesday saying it “is fully adopting” CDC masking guidelines, including recommendation for schools.

“While data continues to show the effectiveness of the three COVID-19 vaccines currently authorized in the U.S., including against the Delta variant, we are still seeing the virus rapidly spread among the unvaccinated,” IDPH Director Dr. Ngozi Ezike said in a news release. “Cases and hospitalizations due to COVID-19 both continue to increase, overwhelmingly among the unvaccinated, but the risk is greater for everyone if we do not stop the ongoing spread of the virus and the Delta variant. We know masking can help prevent transmission of COVID-19 and its variants. Until more people are vaccinated, we join CDC in recommending everyone, regardless of vaccination status, wear a mask indoors in areas of substantial and high transmissions, and in K-12 schools.” 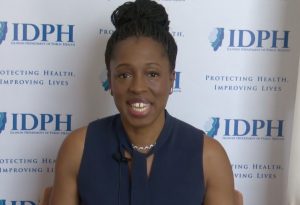 The Delta variant spreads more than twice as easily from one person to another compared to other strains, according to the IDPH news release.

The CDC guidance says masks should be worn by all individuals in areas of substantial transmission, which include those with 50 to 99 cases per 100,000 people over a 7-day period.  Areas of high transmission are above that amount.

The change to federal guidance came as cases in Illinois and around the country continue to rise as the vaccination pace stagnates and mask mandates are relaxed.

The 169 intensive care unit beds in use by COVID-19 patients as of Monday night were the most since June 13. From Monday to Sunday, there were 136 ICU beds in use on average, an increase of about 36 percent from the week prior.

But Pritzker said Tuesday the vaccines have been widely effective in guarding against the most severe cases of COVID-19 for individuals who have had the shot. It remains the most effective way to combat the virus, he said, repeating a claim that 99 percent of those dying from COVID-19 in Illinois in recent weeks were unvaccinated.

“We know that if you’re vaccinated, you’re protected,” he said, noting that experiences for individuals may differ, but for the most part, if vaccinated and contracting the disease, “many people spend a few days in bed feeling bad, don’t need to go to the hospital and then are able to recover.”

While Pritzker said those numbers are encouraging now, further, more dangerous variants of the virus could emerge if the vaccine is not more widely adopted.

“It is not over,” Pritzker said of the pandemic. “We would like it to be over, but it is not yet over and we know that if people remain unvaccinated there is a greater and greater possibility that you’ll have a variant that ultimately will break through the vaccines that have already been developed.”

According to the Illinois Department of Public Health, just over half of the state’s population, or more than 6.4 million individuals, are fully vaccinated. Over the past seven days, 17,776 vaccines were administered each day on average, representing a declining vaccination pace.

The case positivity rate was also on the rise Tuesday, reaching 3.7 percent, a high since April 22 as testing numbers continued to taper off. There were 1,669 confirmed or probable cases of the virus reported Tuesday among 31,019 test results reported.

Still, state and Chicago officials said Tuesday the Lollapalooza music festival will go on as planned starting Thursday, and Pritzker said he will attend.

“I plan to go to Lollapalooza, but I also know I’m gonna watch every single day what it looks like in terms of cases rising and make decisions, smart decisions, for myself, for my family, for our friends, as we move forward,” he said. “And yeah, I may wear a mask when I’m at Lolla depending upon whether I can social distance or not.”

He said anyone feeling uncomfortable in a crowd is encouraged to wear a mask as well.

Positivity rates were higher in southern Illinois, with Region 4, which covers the Metro East area on the Missouri border near St. Louis, seeing a rate of 9.2 percent as of the latest data Tuesday, and southern Illinois’ Region 5 at 8.5 percent. All other regions were on an increasing pace as well.

Over the past three days, the pandemic claimed another 10 lives, bringing the confirmed death toll to 23,414 along with 2,472 probable deaths.