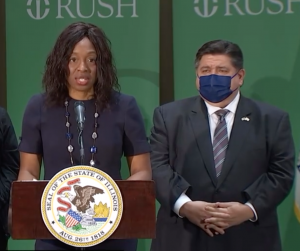 SPRINGFIELD – Illinois Department of Public Health Director Dr. Ngozi Ezike will resign on March 14 after three years leading the agency and two years navigating a deadly pandemic that has claimed the lives of more than 32,000 Illinoisans.

Ezike, who was appointed IDPH director in 2019, became a widely recognized public figure in the state as the COVID-19 pandemic upended daily life across the globe.

“There is something particularly heroic about the service of an extraordinary individual who did not seek greatness, but found it anyway,” Gov. J.B. Pritzker said, proclaiming March 1 “Dr. Ngozi Ezike Day” in Illinois.

When she got the call from Pritzker in January 2019, she said she wrote in her journal, “I’m so excited to grow and be stretched to new limits.”

“I didn’t exactly know the full impact of that,” she said through a laugh Tuesday after reading the passage.

Beginning with daily updates in March 2020, Ezike appeared at more than 160 COVID-19-related news conferences alongside the governor, putting a public face on the medical side of the state’s executive branch-driven pandemic response.

“IDPH consists of a team of unsung heroes, that by nature and definition works behind the scenes, who’s committed to public health. And that commitment gave me strength every day,” she said.

Pritzker said the department will be led in the interim by Dr. Amaal Tokars, an IDPH top deputy who has at times appeared next to the governor at his news conferences as well.

Ezike, a mother of four, thanked her family for “tolerating the absences” over the past two years.

“You have stood by and you have supported me and you’ve not complained and you have made dinners and you’ve done all the pickups and the drop-offs,” Ezike said. “But now it’s time for me to make you my priority. And give back a portion of the attention and the encouragement and the support that you lavished on me.”

An emotional Ezike thanked the governor and the people of Illinois for giving her strength in a difficult time.

“I acknowledge and mourn with the families of all the lives lost not just to COVID, but to gun violence, to suicide, to drug overdose, to racism, to cancer, and all the other diseases and ills that public health officials and all of our partners work tirelessly to curb,” she said. 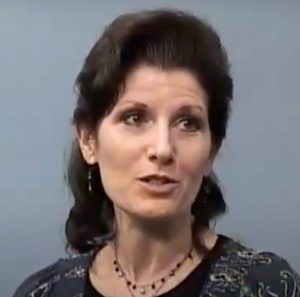 Ezike also said that while the statewide indoor mask mandate was lifted as of Feb. 28, it’s important to be respectful of Illinoisans who still choose to wear face coverings for medical or other reasons.

“We have embarked on a new chapter in our COVID journey, and I just want to highlight that as the mask requirement has been lifted it does not mean that it’s not recommended,” she said. “And as we think about our individual situations…It may absolutely be the case that you are an individual either because of your own self-assessment… or because of those that you live with, that you will continue to wear a mask.”

Ezike said declining COVID-19 transmission rates and hospitalizations, as well as increasing vaccination rates, are leading to a lull in the pandemic that created a window for her to step down.

“I’m hoping that with all the vaccinations and the therapeutics that are available that we will have, you know, a quiet spring. Spring and summer have typically been stable times. So this is my chance,” she said.

She said IDPH will continue to monitor for future surges and adapt accordingly.

Pritzker also warned that despite the mandate being lifted, “COVID has not been eradicated.”

March 1 marked two years to the day that Illinois’ third and fourth confirmed COVID-19 cases were reported, Pritzker said. Since that time, Ezike has dedicated long nights to overseeing the state’s pandemic response, he added.

“With all her being, she has dedicated each day — and I mean every day — to the agency’s mission to protect the health and wellness of the people of Illinois,” he said. “For much of the last two years, she’s dedicated every night too, even with this unprecedented internal workload.”

The governor credited the outgoing public health director for “providing not only the latest expertise and data, but also her empathy and her compassion.”

Ezike has been “a beacon of stability for millions during a time of tremendous uncertainty,” he said, crediting her for giving updates in English and Spanish.

“This pandemic is a collective trauma that has, for many, numbed their ability to comprehend death on a massive scale,” Pritzker said. “Not Dr. Ezike. No number of sleepless nights and endless days could wear her down in her commitment to think first and foremost of Illinois’ most vulnerable.”

In announcing Ezike’s plan to leave the department, Pritzker called it a “change that I’m loathe to accept.”

“But perhaps she can finally get a good night’s sleep and precious time with her husband and her four kids,” he said. “I have utmost faith that Dr. Ezike’s next journey will also bring more good to the world, as has been the hallmark of every step of her career.”

“Throughout this pandemic, Dr. Ezike has been a calming, compassionate voice offering reassurance and information to the people of Illinois in at least two languages,” he said. “I want to thank her for her commitment to the public health of this great state and wish her the very best in her next endeavors.”