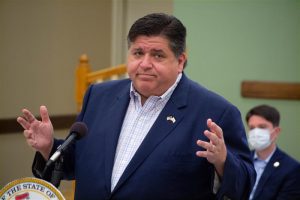 Gov. J.B. Pritzker didn’t directly say Monday, Aug. 16 whether he would extend the state’s eviction moratorium for those facing hardships due to the COVID-19 pandemic as cases, deaths and hospitalizations for the virus continue to rise. (Capitol News Illinois photo by Jerry Nowicki)

SPRINGFIELD – Gov. J.B. Pritzker didn’t directly say Monday, Aug. 16 whether he would extend the state’s eviction moratorium for those facing hardships due to the COVID-19 pandemic as cases, deaths and hospitalizations for the virus continue to rise.

“We’ve looked at that, we continue to look at it. We’ll make a decision about that soon,” Pritzker said at an unrelated news conference in Springfield when asked if he would extend the moratorium, which is set to expire at the end of the month.

The governor’s comments come as COVID-19 intensive care bed utilization has increased by 290 percent on a weekly average since July 11. Positivity rates and death counts also continue to rise, although vaccinations have picked up in recent days as well.

When it comes to evictions, Illinois courts are currently under a Supreme Court order until Sept. 1 allowing for the filing of eviction claims but staying certain final trials and judgements. Pritzker’s current disaster declaration and associated eviction moratorium is due to be renewed or expire on Aug. 21.

The governor has routinely extended his executive orders at the end of the 30-day disaster declaration each month, and he has made several changes to eviction orders along the way, including most recently allowing for evictions of “non-covered persons.”

The state is in the process of paying out about $500 million through the Illinois Rental Payment Program run by the Illinois Housing Development Authority and the Illinois Department of Human Services. Thus far, 24,174 applicants have received more than $209.7 million from the fund, according to IHDA’s website. That’s an average of about $8,600 per household.

IHDA has received more than 97,000 applications thus far, and the agency estimated earlier this month that it could help about 63,000 renters with the $500 million in funding. While the window to apply through the IHDA portal has closed, aid is still available through IDHS service providers at https://www.illinoisrentalassistance.org.

A court-based program designed to connect renters with aid is set to launch in September.

“So a lot of work has gone into ramping down the eviction moratorium,” Pritzker said, noting the federal government has filed its own moratorium lasting through Oct. 3. But that moratorium, which prevents enforcement action on evictions in virtually all Illinois counties, is being challenged in the courts.

“So we’ll be working with all of the organizations across the state as well as renters and landlords to alleviate the pain that people may experience,” Pritzker said. “But either way people won’t be, you know, forced out of their homes right away, if they are part of this process that we’ve created.”

The pandemic picture in Illinois, meanwhile, continues to worsen.

Only 899 of the 6.6 million fully vaccinated Illinoisans had been hospitalized in 2021 as of Wednesday, Aug. 11. About 52 percent of the state’s population is vaccinated.

The pace of vaccinations has increased recently amid the surge, with 38,840 administered on average daily over the past seven days. That’s a 123 percent increase from July 26.