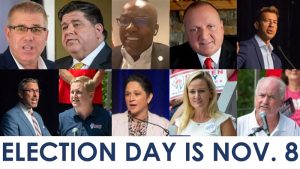 SPRINGFIELD – In the Tuesday, Nov. 8, election, Illinois voters will cast a ballot on a state constitutional amendment, every statewide constitutional office, every seat in the General Assembly and, in 12 counties, a spot on the state’s Supreme Court.

For more information about voting, including how to and where to cast an in-person ballot on election day and prior to it, you can visit your local election authority. You can find information for all local election officials on the Illinois State Board of Elections website. Information on where your Election Day polling place can be found here.

Below is a brief summary of the statewide races. Links to other coverage on the races and interviews with the candidates and coverage of the Supreme Court races can be found here in the Capitol News Illinois voter’s guide.

Gov. J.B. Pritzker is facing off against state Sen. Darren Bailey, a Republican farmer from downstate Xenia. The candidates’ views diverge widely on just about every topic, from abortion to state spending to pandemic response to addressing gun crime. The Libertarian candidate is Scott Schluter.

The candidates’ differences are demonstrated by Bailey’s voting record on some of the major policy proposals backed by Pritzker. Bailey was a “no” vote on almost all of them, saying in one public appearance that he’d like to repeal “everything” Pritzker signed into law during his first term in office.

Bailey voted against the state’s operating budget each year, saying it contains wasteful spending. Pritzker, meanwhile, has cited those budgets as the reason Illinois was able to pay down a backlog of unpaid bills that ballooned to $16 billion under Republican Gov. Bruce Rauner, along with other interest-accruing debt.

Bailey also opposed the legalization of marijuana and a $45 billion public works infrastructure plan. The public works plan was funded by a measure that doubled the motor fuel tax and increased license-related fees, as well as a gambling expansion. Bailey voted against both proposals.

He was one of just 13 lawmakers to vote against a measure capping insulin prices for some insurance plans, and he voted “no” on increasing the minimum wage to $15 hourly by 2025.

He also opposed the Climate and Equitable Jobs Act that increases investment in renewable energy and aims to force fossil fuel producers offline in Illinois over the next two decades, citing the bill’s upward pressures on downstate energy prices as his reason for opposing it.

Pritzker’s refrain in recent debates has been that Bailey “has no plan” for Illinois, and he has painted the Republican as a conservative “extremist.”

Bailey, meanwhile, has focused his attention on crime, especially in Chicago, as well as taxes and state spending.

In a recent Springfield campaign stop, Bailey said his plan is to “come in with a totally new approach to government because nothing’s working right.”

He said he believes there’s $10 billion to $15 billion of waste within the state budget, although he hasn’t said what he would cut, aside from arguing that administrative costs in public education are too high.

He frequently mentions his plan for a “zero-based budget,” which, he said, means “accounting for every dollar that’s spent.” He put the responsibility for identifying the waste on the shoulders of yet-to-be-named agency heads. And he said later in a recent debate he’d begin identifying them the day after the election.

Bailey has also been a staunch opponent to every measure that expanded abortion rights in Illinois in recent years, a point Pritzker has frequently reiterated on the campaign trail. Despite endorsements from the state’s anti-abortion groups, Bailey has recently said he wouldn’t try to repeal state abortion laws, because he wouldn’t have the backing in the Democratic-controlled General Assembly to do so.

He would, however, look to repeal a criminal justice reform known as the SAFE-T Act, which passed in 2021 on slim Democratic majorities. Pritzker has said he will look to pass an amendment to that bill when lawmakers return to Springfield a week after the election.

In Illinois, the position of chief fiscal officer is that of comptroller.

Democrat Susana Mendoza has been elected to that post twice, for a partial term beginning in December 2016 before gaining reelection in 2018. She touts the reduction of a $16 billion bill backlog to a standard 30-day billing cycle, the state’s largest-ever $1 billion balance in its rainy-day fund and a pension payment that went $500 million beyond statutory levels in the current fiscal year as some of her greatest accomplishments.

Her opponent, Shannon Teresi, is a newcomer to state politics and is the McHenry County auditor. It’s an experience, she said, that will help her root out “waste, fraud and abuse” in state government — one of her most-repeated reasons for running.

The Libertarian candidate is Deirdre McCloskey.

Frerichs touts more than $1 billion in investment gains as his greatest achievement while emphasizing his administrative work on returning unclaimed property, a state college savings plan and other programs overseen by the office.

Demmer has focused his race on being a statewide check on Democratic power when it comes to tax and budget issues. He has frequently attacked Frerichs for a comment he made in 2020 regarding a proposed graduated income tax amendment: “One thing a progressive tax would do is make clear you can have graduated rates when you are taxing retirement income. And I think that’s something that’s worth discussion,” Frerichs is quoted as saying in the Daily Herald.

The treasurer, meanwhile, has no formal role in setting tax policy and Frerichs has frequently stated he does not support a retirement tax.

Incumbent Secretary of State Jesse White is stepping down at the end of his term, creating a vacancy in the office for the first time in 24 years.

The race to succeed him features Democrat Alexi Giannoulias, a former state treasurer from Chicago, and Republican State Rep. Dan Brady, of Bloomington. Each has a long list of initiatives they would like to implement to modernize the office.

While Giannoulias has White’s endorsement, the outgoing secretary has also spoken highly of Brady. And Brady has the endorsement of Republican former governor and secretary of state Jim Edgar.

The Libertarian candidate is Jon Stewart.

DeVore was a frequent challenger of the governor’s executive order authority throughout the pandemic, while Raoul defended that authority in court. But it’s not the only issue on which the pair differed.

In an hourlong discussion organized by the Illinois Associated Press Media Editors earlier this year, DeVore defended his use of the private lawsuit to go after individuals, including the governor and a special education teacher, who he believes have defamed him.

Raoul, meanwhile, said it’s a waste of court resources. They also differed on the SAFE-T Act, which DeVore believes is unconstitutional, and whether the AG should be prosecuting public officials. The Libertarian candidate on the ballot is Dan Robin.

Voters will decide on whether the state’s constitution will be amended to give a right to workers to unionize. It reads:

(a) Employees shall have the fundamental right to organize and to bargain collectively through representatives of their own choosing for the purpose of negotiating wages, hours, and working conditions, and to protect their economic welfare and safety at work. No law shall be passed that interferes with, negates, or diminishes the right of employees to organize and bargain collectively over their wages, hours, and other terms and conditions of employment and work place safety, including any law or ordinance that prohibits the execution or application of agreements between employers and labor organizations that represent employees requiring membership in an organization as a condition of employment.

(b) The provisions of this Section are controlling over those of Section 6 of Article VII.

Supporters of the amendment say it is needed to prevent future governors and lawmakers from attempting to pass “right to work” legislation, which former Gov. Rauner attempted to do. Right to work laws prohibit employers from requiring membership in a labor union as a condition of employment.

Opponents, meanwhile, argue that passage of the amendment would give public-sector labor unions greater power, which could lead to more expensive government contracts that create upward pressure on property taxes.