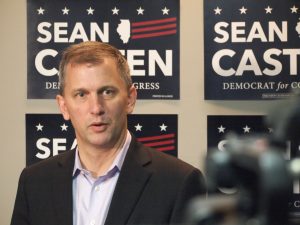 Congressman-elect Sean Casten addresses media questions the day after his election in the 6th Congressional District. He said he will push climate-change issues as a congressman just as he did as a CEO. “My drivers in this life don’t change because I have a different job description,” Casten said. (Kevin Beese/Chronicle Media photo)

Don’t expect a different Congressman Sean Casten than you got with Candidate Sean Casten.

“I am who I am,” Casten said, commenting about Republican mailers during his congressional campaign that questioned his language and demeanor as a candidate.

Adopting the title of congressman before his name won’t alter his frankness in addressing issues, Casten said.

The businessman and first-time candidate from Downers Grove, who defeated Republican incumbent Peter Roskam of Wheaton in the 6th District Congressional race, said he understands that statements he may have harmlessly made as a CEO now become political fodder because he has a ‘D’ (for Democrat) after his name.

Casten had come under fire from Republicans during his 6th District run for comparing President Donald Trump to terrorist leader Osama bin Laden and for his admiration of sex columnist Dan Savage. The right-wing Illinois Family Institute has labeled Savage “a vicious, anti-Christian, homosexual hatemonger and perverse sex columnist.”

The congressman-elect admits he is not always the most polished speaker, but said he will always be open with constituents and peers.

Talking with the media Nov. 7, the day after his election to Congress, Casten said he stands behind the investigation into possible collusion between members of the Trump campaign and Russian leaders in the 2016 presidential election.

“Large numbers of Americans think we have a financially conflicted president … Sunlight remains the best disinfectant,” Casten said. “If we’re not going to shine sunlight on that, we’re putting at risk the fabric of our democracy. We’re going to have to deal with that if the president is going to fight that. We have to absolutely find out what happened.”

He said Americans want to trust their government is doing the right thing.

“If they don’t trust it, we need to make sure we fix whatever is broken so they do,” the congressman-elect said.

Casten, whose business career has focused on climate-change issues, most notably reducing greenhouse gas emissions, wants to follow that through on the federal level.

“My drivers in this life don’t change because I have a different job description,” the Downers Grove Democrat said. “It’s still the thing that motivates me in my soul.” 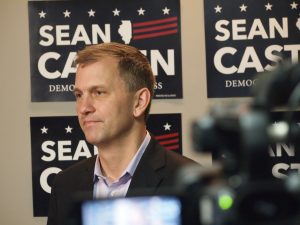 Casten listens to a question at a press conference the day after his election as 6th District congressman. He said he wants to restore people’s trust in government. (Kevin Beese/Chronicle Media photo)

He said a prevailing message he got from voters during the campaign is that they want to expand and protect Obamacare. Casten said he hopes to push that forward, but said he will yield to individuals with more political expertise than him to figure out just how to advance the measure with a Republican-controlled U.S. Senate and a president against the issue.

Casten said there “was something in the water” in the 6th District, which includes Cook, DuPage, Kane, Lake and McHenry counties, that caused a groundswell of grass-roots support for his candidacy.

“I think a week after the (Democratic) primary we had a thousand people sign up to volunteer and that was there waiting to be exposed,” the congressman-elect said.

He vowed to not put politics over policy during his time in Congress.

“I don’t particularly care, personally, about what’s politically smart,” Casten said. “What I care about is do you believe in something and stand for it, and are you transparent about it. What motivated me to run was that I didn’t feel like that was where we were at this moment. What I’d like to believe is true is by virtue of the results the voters shared that view.”

Casten said he thought young people speaking out and calling for action after the Parkland, Fla. school shootings was a big part of the increase in young voters going to the polls.

He said he sensed young people’s frustration and desire to take action when meeting with high school students this summer.

“How many high schools in the district now have March for Our Lives clubs, and kids like my daughter who are getting politically involved for the first time and have an outlet to do it? You’ve got these 16-, 17-year-old kids who have become national celebrities,” Casten asked. “… They created this thing where people realized their voice mattered and they had a vote.”

Casten said he is not one to make many pledges, saying “I don’t know enough about the job to say what I am going to do once I get the job,” but said his pledge to have at least four town hall meetings a year is a promise he is definitely committed to keeping.