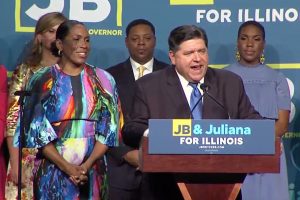 SPRINGFIELD – Seven teams of Republicans and one team of Democrats have lined up to challenge Gov. J.B. Pritzker and Lt. Gov. Juliana Stratton in the 2022 elections.

Monday, March 14 was the deadline for candidates to turn in their nominating petitions to the Illinois State Board of Elections to get their names on the June 28 primary ballot.

Candidates who were in line at 8 a.m. on the first day of filing, March 7, will enter a lottery for a chance to have their names listed first on the ballot. But those who filed in the final hour before 5 p.m. Monday, March 14, have a chance to be listed last on the ballot.

Some studies have suggested being listed first or last in a crowded field of candidates improves a candidate’s chances, especially in races where the candidates have low name recognition.

The State Board of Elections has another week, until Monday, March 21, to certify the petitions. In the meantime, candidates and party officials may try to challenge other candidates’ petition signatures.

Among the last to file in the governor’s race were Republicans Jesse Sullivan, of Petersburg, and his running mate Kathleen Murphy, of Warrenville. 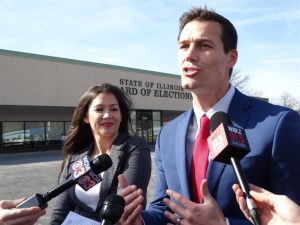 “To be honest, it’s not a beautiful day today and any day I don’t have to be next to a bunch of other politicians and we get to be outsiders stepping into this race, it’s a good, day,” Sullivan said to reporters outside the State Board of Elections office in Springfield just before turning in his petitions.

“Yeah, we’re not looking for a photo op with Gov. Pritzker. We were looking to turn in the best petitions possible to represent the people who worked so hard to help us get them,” Murphy said.

Sullivan, a political newcomer and owner of the venture capital firm Alter Global LLC, and Murphy, a former spokeswoman for former state Rep. and 2018 GOP gubernatorial hopeful Jeanne Ives, will face formidable competitors for the 2022 nomination.

Those include Aurora Mayor Richard Irvin and his running mate, state Rep. Avery Bourne, of Morrisonville.

Another late filer Monday was GOP gubernatorial candidate Max Solomon, of Hazel Crest, and his running mate, Latasha Fields, of Chicago. According to his website, Solomon is a native of Nigeria who now practices law in the Chicago area, while Fields is the founder of Christian Home Educators Support System.

They join other teams of candidates who filed earlier: state Sen. Darren Bailey, of Xenia, and his running mate Stephanie Trussel of Lisle; Bull Valley businessman Gary Rabine and his running mate Aaron Del Mar of Palatine; former state Sen. Paul Schimpf, of Waterloo, and his running mate Carolyn Schofield of Crystal Lake; and the team of Emily Johnson, of Wheaton, and Bret Mahlen, of Orland Park, members of the group We Are the People Illinois, which has called for investigations into unfounded claims of voter fraud in the 2020 elections. The website for the group identifies it as consisting of “over 200 people.”

One other GOP candidate, Keisha Smith, of Country Club Hills, filed for governor without a running mate, something that a State Board of Elections spokesman said could be grounds for objection and disqualification because state law requires candidates for governor and lieutenant governor to run as a team.

Pritzker and Stratton also face one challenge from within their own party, Beverly Miles, a nurse and U.S. Army veteran from Chicago, and her running mate Karla Shaw.

Illinois voters this year will also choose candidates for other constitutional offices. The most contentious of those will likely be for the office of secretary of state, where incumbent Jesse White is stepping down after six terms in office.

On the Democratic side, former state Treasurer Alexi Giannoulias and Chicago City Clerk Anna Valencia appear to be the leading candidates, while Chicago Alderman David Moore and charity director Sidney Moore, of Homewood, are also in the race.

On the Republican side, former U.S. Attorney John Milhiser, of Springfield, and state Rep. Dan Brady, of Bloomington, are competing for the nomination. Also in the race is former Chicago police officer Michelle Turney, who also affiliates with the group We Are The People Illinois.

In the race for attorney general, three Republicans have lined up to challenge incumbent Democrat Kwame Raoul. They include Thomas DeVore, the southern Illinois lawyer best known for his lawsuits challenging Pritzker’s COVID-19 mitigations; Deerfield attorney Steve Kim; and David Shestokas, a former assistant state’s attorney for Cook County who is a hearing officer for the Chicago Board of Elections.

In the race for state treasurer, Republican state Rep. Tom Demmer, of Dixon, and Lake Bluff resident Patrice McDermand, also of We Are The People Illinois, will vie to challenge incumbent Democrat Michael Frerichs.

And in the race for Illinois comptroller, Republicans Shannon Teresi, a certified public accountant from Crystal Lake, and Michael Kinney, of Carol Stream, will compete for the nomination to challenge incumbent Democrat Susana Mendoza.