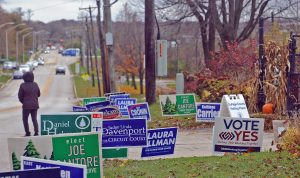 Elizabeth Chaplin won’t be quite so lonely at DuPage County Board meetings anymore.

The Downers Grove resident, until last week the Democratic Party’s lone board member, will be joined by a half-dozen party members after a Blue Wave election that also gave Democrats their first countywide office in living memory.

The stunning showing came in a longtime Republican stronghold that has grown increasingly diverse and competitive in recent years.

The state Democratic ticket also recorded a DuPage sweep while voters went with Democrats in six congressional races in districts that overlap the county, including victories by county residents Sean Casten (6th) and Lauren Underwood (14th).

Here’s a closer look at results from the western suburbs and exurbs:

Democrats won one countywide office, came close in two others and elected seven members to the County Board.

Democratic winners — all women — included Kaczmarek who will serve a short term as the clerk’s office merges with the DuPage Election Commission.

Republicans will still run the County Board, but last week’s Democratic surge resulted in six new board members from the Democratic Party.

The Democratic blue wave diminished at the Kane-DuPage county line as both parties had election successes to crow about.

Democrat Ron Hain had the local upset of the night, winning the sheriff’s office by more than 9,000 votes over incumbent Republican Donald Kramer. But county clerk Jack Cunningham prevailed in what was a tight race much of the night before pulling away to a 6,000-vote triumph.

Odd-numbered County Board districts (plus District 6) were up for election.

In District 6, Democrat Matt Hanson beat Ronald Ford, who ran as a write-in candidate, for a two-year term.

Batavia voters overwhelmingly rejected a referendum question that would have ended home rule in the community. Communities above 25,000 in population are permitted to pass laws to govern themselves as they see fit within the confines of the state and federal constitutions.

It was the first election with the entire county process supervised by the Kane County clerk’s office. Previously, the City of Aurora Election Commission handled elections in that city before it was abolished by voters in the March 2018 primary.

An overwhelming number rejected a proposed 1 percent sales tax that would have funneled more than $5.5 million into Oswego Community Unit School District 308 for facility improvements.

While the money would be barred from being used to pay for teacher or administration salaries or pensions, it could go toward maintenance, roof and parking lot repairs, security, safety, American’s with Disabilities Act compliance, additions and new facilities.

The sales tax proposal was soundly rejected, losing by 10,880 votes.

Proceeds from the tax would have been distributed to Kendall County school districts based on enrollment figures.

While the state Democratic ticket prevailed here, local Republicans held their own in most county races.

In six contested County Board races the incumbents —  four Republicans and two Democrats — all won election.