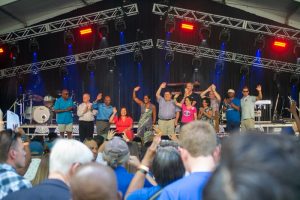 The Democratic candidates for statewide office and the state’s legislative leaders pose for a photo on the stage at Governor’s Day at the Illinois State Fair Wednesday, Aug. 17. (Capitol News Illinois photo by Jerry Nowicki)

SPRINGFIELD – In one of the largest annual gatherings of Illinois Democrats on Wednesday, the party had a message for its faithful that attended a pair of Illinois State Fair week events: “Democrats deliver”

This year’s gathering of the Illinois Democratic County Chairs Association had 19 speakers, including congressional and statewide candidates and the Democratic leaders of the General Assembly, while the keynote speaker was Congressman Joe Neguse, D-Colorado.

“We’ve got a hell of a record, and we ought to run on it,” Neguse said to the room full of Democrats on the floor of the Bank of Springfield Center that once served as the Illinois House of Representatives during the COVID-19 pandemic. “I think Sen. (Dick) Durbin, D-Illinois, would agree with me when I say that this Congress is arguably the most productive Congress since the Great Society in the 1960s.”

He cited a federal bipartisan infrastructure bill, gun reforms and the bipartisan CHIPS and Science Act to invest tens of billions of dollars in U.S. companies to promote computer chip production.

“And I haven’t talked about the Inflation Reduction Act, which will reduce prescription drug prices and, by the way, is the most significant climate action ever taken by the United States Congress in the history of our republic,” Neguse said.

On the state side, Gov. J.B. Pritzker touted his signature on a bill increasing the minimum wage to $15 by 2025, a measure providing $1.8 billion in tax relief and the fact that the state has virtually eliminated a bill backlog that rose to $16 billion during Gov. Bruce Rauner’s administration.

He also mentioned state investments in the Illinois State Police to reduce forensic science backlogs and increase the number of troopers on state roads. The Climate and Equitable Jobs Act and, the state’s pandemic response, abortion protections and the Rebuild Illinois capital infrastructure plan were also points of emphasis for the Democrats.

While “Democrats Deliver” adorned the signage handed out to attendees, the speakers also sought to differentiate the party from a GOP they described as the “lunatic fringe,” “crazy as hell” and a “cult of fear.”

“And if you look at who’s winning these primaries on the Republican side, they are crazy as hell and they’re seeing and doing crazy stuff. …And my fear is that if these individuals get elected, we’re going to see January 6 on a weekly basis,” secretary of state candidate Alexi Giannoulias said.

“I was never worried about the finances of this state even during the darkest days of the pandemic,” Comptroller Susana Mendoza said. “When my colleagues in other states would ask, ‘How do you seem so calm?’ I would say, ‘Well, it’s easy – the worst virus to ever hit Illinois’ finances wasn’t COVID, it was Bruce Rauner.’ And thank God we now have JB Pritzker.”

Mendoza, who took office halfway through Rauner’s term as governor, frequently sparred with the ex-governor. She looked back on that, saying she would fight every day to “save our state,” and “metaphorically speaking, kick him in the groin with much joy and pleasure.”

A short video presented at the brunch event showed a montage of clips from Rauner’s four years in office before cutting to images of Bailey with the text “he’s worse.”

Attorney General Kwame Raoul criticized Bailey and GOP AG candidate Thomas DeVore, who he described as a “COVID ambulance chaser” for the several lawsuits he has filed aiming to lift COVID-19 mitigations in the state.

“It matters to fight against audacious forces who threatened to diminish our rights, attack our nation’s Capitol, attack law enforcement and attack our democracy,” Raoul said.

Pritzker reused a line from a speech he gave to Florida Democrats in July, saying Republicans are “trying to distract us into believing that marriage equality, Black history, Disneyworld and library books are more of a threat to our children than the AR-15.”

“While the Republicans try to convince Americans that Q Anon lies are real, our diverse Democratic Party is getting things done for Illinois families,” he said.

The subject of abortion and health care rights was also a frequent talking point for speakers, including Lt. Gov. Juliana Stratton.

“The Trump-endorsed MAGA extremist Darren Bailey will do everything in his power to try to turn back the clock on our progress,” she said. “And he has the unmitigated gall to think that the women of Illinois are going to just sit back, sit down and stay silent.”

While the crowds at the gathering of Democrats often chanted in unison in support of candidates, the absence of the party’s former chair from the Wednesday events indicated there is some lingering resentment regarding her recent unseating.

Congresswoman Robin Kelly, of Matteson, was ousted as party chair last month by new chair Elizabeth “Lisa” Hernandez, a state representative from Cicero who had Pritzker’s backing. Kelly didn’t attend the brunch or the Governor’s Day event at the State Fair that followed but issued a statement saying she’d back Democrats up and down the ballot “whether or not we are united.”

“The stakes are too high, this is the most important election of our lifetime,” she said in a statement in response to Capitol News Illinois questions.

Hernandez briefly took questions at the fair Wednesday and was asked how she would mend fences within the Democratic Party.

“I think that we are moving forward,” she said. “We are – the party is about trying to get Democrats elected in November. And that’s really the focus, that is what we are all on board with. And the mending the fences … there is really just a real intent to try to get the Democrats through November and I don’t see a problem.”