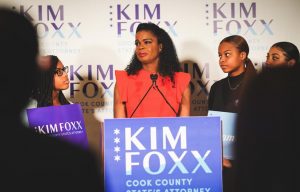 The Jussie Smollett soap opera appeared to have no lasting effects on Cook County State’s Attorney Kim Foxx in the Democratic primary.

Foxx captured more than 50 percent of the vote in overall ballot totals and in the city of Chicago during the March 17 primary.

Her closest competitor, former prosecutor and Navy veteran Bill Conway, got 31 percent of the vote overall and 27 percent in the city.

Foxx did not run as strong in suburban Cook County, capturing 43 percent of the 387,623 votes cast, just 7 percentage points better than Conway.

Two other candidates in the race, former prosecutor Donna More and former Chicago Ald. Bob Fioretti, got 13 percent and 5 percent of the total vote, respectively.

Her challengers were critical of Foxx’s actions in the case of Jussie Smollett, including dropping charges against the former “Empire” actor for faking a hate crime against himself. However, it appears that case did little to pull votes away from the incumbent. 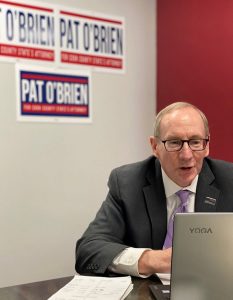 In a video to voters after her primary victory, Foxx said she was humbled by the support to put her on the path to serve another term.

“It’s been the honor of my lifetime to serve as your state’s attorney,” Foxx said.

She said she would normally be at train stops to thank residents for their support but was taking extra precautions in the days after the election with the coronavirus fear ramping up.

“This win is about all of us,” Foxx said. “I’ve spent the last four years working to reform a system that is not representative of the community it serves.

“I’m ready to continue that work. Thank you for your vote and your support. Let’s continue the fight for fairness and justice together.”

In November, Foxx will face former Judge Pat O’Brien, who easily won his Republican primary over former prosecutor Christopher Pfannchuke. O’Brien got 73 percent of the 65,713 total votes cast in the race.

O’Brien said in a post-election statement that his decisive primary victory sets the stage for him to win in November.

He said his primary triumph “was a great victory for the people of Cook County who are fed up, embarrassed and have decided enough with ineptitude and outright corruption in the Cook County State’s Attorney’s Office.”

“I’m not a politician,” O’Brien added. “I did not run to fulfill a misguided political agenda. I’m running to restore what the citizens of Cook County deserve in the State’s Attorney’s Office: experience, professionalism, common sense and the rule of law.”

He said he was appreciative of Republican primary support and is now looking to broaden his support base.

“We begin the mission of bringing our community together, regardless of their political affiliation, to restore honor and integrity to the office of state’s attorney by defeating Kim Foxx on Nov. 3.”