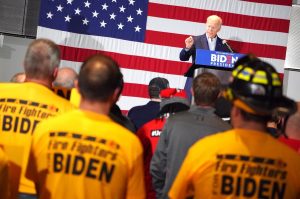 Fears of the coronavirus seemed to have little impact on most area cities and counties as residents, in general, turned out to vote in about the same numbers they normally do.

Armed with wipes, plastic gloves, masks and their own markers, in some cases, people made their ways to the polls March 17 to vote in the Democratic and Republican primaries.

Chicago led the way with 32 percent of its registered voters casting ballots in the election.

Every area city and county had at least two of every 10 registered voters cast ballots in the primaries, with Tazewell County just hitting that number, with exactly 20 percent turnout.

Toni Preckwinkle, chair of the Cook County Democratic Party, credited the hotly contested state’s attorney race in her county and the vacancy of the Cook County seat on the Illinois Supreme Court for driving up voting numbers in Cook. Both party-endorsed candidates — Kim Foxx for state’s attorney and P. Scott Neville Jr. for the state Supreme Court — were victorious.

“We won races from the top of the ticket to the bottom,” Preckwinkle said. “The party did a good job in getting the word out about our candidates; and I think we can all be proud of the results.”

Members of the Cook County Democratic Party commended voters for their determination to vote, given the rapidly changing landscape with the coronavirus.

Kori Rempfer, a DeKalb County resident who supported the campaign of U.S. Sen. Elizabeth Warren, said the close Democratic presidential primary in her county, could be because Democrats in the area tend to lean progressive, but also because Sanders had a strong ground game in the area.

“Only two campaigns had infrastructure here in the county with phone banking, canvassing and events going back to last year and those were Warren and Sanders,” Rempfer said. “Their supporters were motivated early on; and I think the effort they put in made a difference.”

She believes Warren could play a key role with the Biden administration in getting the country “out of the mess we are in.”

Regarding Biden being able to unite followers of more progressive candidates like Sanders and Warren, Rempfer doesn’t see that as an issue.

“I think our Dems will rally behind him,” she said. “I know I can’t wait to volunteer for him and vote for him.”

Just 37 of the 5,014 people who voted in East St. Louis pulled Republican ballots.

Here is a look at what percentage of voters asked for Democratic primary ballots: