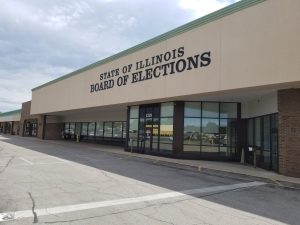 SPRINGFIELD – More than 2 million Illinois voters have requested vote-by-mail ballots and more than 26,000 such ballots have already been returned, according to the Illinois State Board of Elections.

That means about a quarter of the state’s registered voters had requested vote-by-mail ballots as of Wednesday, Sept. 30.

The number continues to grow as public health guidance advises against congregating in indoor places due to concerns about the spread of COVID-19. Earlier this year, state lawmakers passed a law requiring election authorities to send applications for vote-by-mail ballots to registered voters who voted in recent elections.

Applications must be sent back to the election authority to receive a mail-in ballot. Many of the applications have already been distributed to voters, and vote-by-mail and early voting periods began last week.

Those who have requested mail ballots but change their minds and would like to vote in person instead have avenues to do so, according to ISBE spokesperson Matt Dietrich, who said there are safeguards in place to ensure no double voting occurs.

A voter who received a mail ballot but wishes to cast a ballot in person must surrender the ballot at an early voting location or polling place on Election Day and will be given a regular ballot.

A voter who does not surrender the ballot must cast a provisional ballot. Provisional ballots are not counted until all the mail ballots have been processed and it is assured that the voter’s ballot is not among them.

According to Dietrich, if someone has requested but not yet received their mail ballot and wants to vote in person, the voter can sign an affidavit at the polling place or early voting location attesting that they have not received a mail ballot. The voter will then be given a regular ballot. 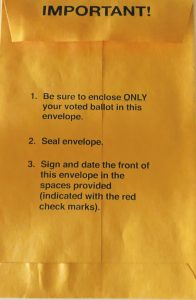 More than 17 percent of all active voters have requested mail-in ballots. The previous high for vote-by-mail was 9.3 of the total vote in the November 2018 election. (Chronicle Media photo

“This happens most frequently with voters who request their mail ballot very late in the process and don’t receive it as of Election Day, though a voter can do this anytime as long as they haven’t received the ballot,” he said.

Voters using this method are instructed to discard the mail ballot if it arrives, but if they do sign and return it for voting, they’re committing vote fraud and are subject to Class 3 felony charges, Dietrich said.

Gov. J.B. Pritzker was asked at a virtual news conference Wednesday, Sept. 30 if he had any concerns about rhetoric from President Donald Trump in the Tuesday, Sept. 29 presidential debate in which Trump continued to raise questions about the validity of a November election that has already smashed mail-in voting records in many states.

Pritzker said he would feel “confident in the system we have” if he were voting anywhere in the state, noting that the new law has made the process “safer and easier.”

“We’ve had vote-by-mail in Illinois for some number of years,” he said. “And so there’s, I think, a reasonable high confidence level of people who have done it have done so successfully. We have not had situations of voter fraud in Illinois caused by vote by mail.”

All mail-in ballot requests must be received by Oct. 29 ahead of the Nov. 3 election, but officials recommend submitting requests earlier to ensure a ballot is received by Election Day.

Returned ballots must be postmarked by Nov. 3 and received by the local election office by Nov. 17 in order to be counted.