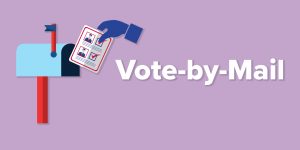 On June 16, Gov. J.B. Pritzker’s office said the program is aimed at ensuring “safe and active participation in the 2020 general election during the ongoing COVID-19 pandemic.” (fairvote.org image)

SPRINGFIELD – Anyone who cast a ballot in the last three years or who registered to vote or changed addresses after the March primary will be sent an application to vote by mail after Gov. J.B. Pritzker signed a bill expanding the program Tuesday, June 16.

In a news release, Pritzker’s office said the program is aimed at ensuring “safe and active participation in the 2020 general election during the ongoing COVID-19 pandemic.”

Local election authorities must mail or email the applications to voters who cast a ballot in the 2018 general election, the 2019 consolidated election or the 2020 general primary election, as well as voters who registered or changed addresses after the March primary. Any eligible voter who submits an application by Oct. 1 will receive their ballot by Oct. 6.

“Sending vote-by-mail applications to residents who have participated in recent elections will allow more people to exercise that right from the safety of their own homes and help reduce the spread of COVID-19 in our communities,” Pritzker said in a news release.

The changes were backed by the House Democratic Women’s Caucus and sponsored by Rep. Kelly Burke, D-Evergreen Park, in the House and Sen. Julie Morrison, D-Lake Forest, in the Senate.

“The COVID 19 pandemic has created many challenges, but participation in the November election should not be one of them,” Burke, an assistant majority leader in the House, said in a statement. “Just as we have taken precautions to make shopping, traveling, and other everyday tasks safer, we must also take precautions and make adjustments to ensure everyone can safely exercise their right to vote.”

Republicans, however, have argued that the program is susceptible to fraud. 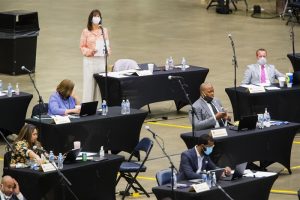 : Rep. Kelly Burke, D-Evergreen Park, answers questions about vote-by-mail legislation during the spring legislative session last month. The Illinois House of Representatives conducted its spring session at the Bank of Springfield Center in Springfield instead of in its chamber in the Illinois Capitol building to practice social distancing amid the COVID-19 pandemic. (Pool photograph by Ted Schurter of The State Journal-Register in Springfield.)

Sen. Paul Schimpf, R-Waterloo, argued the bill creates a system with “significant” costs that are unnecessary given that Illinois already allows any citizen to vote by mail. He added it would also place a “significant burden” on local election authorities, whom he also argued have not been able to offer enough input.

The Illinois State Board of Elections filed a fiscal note saying that if the bill’s provisions are fully implemented by every local election authority, it would eat up every dollar of the more than $16.7 million the state will receive from the federal CARES Act for elections.

The legislation also requires the Illinois State Board of Elections to: post an application for a vote by mail ballot on its website; allow a new registrant to apply for a vote-by-mail ballot when completing the online registration; provide notice to election authorities about compliance with the new law; and adopt emergency rules to provide reimbursement for expenses related to the 2020 general election incurred as a result of COVID-19 and the new requirements.

The legislation also raises the standard for rejecting a vote-by-mail ballot by requiring local election authorities to appoint a bipartisan panel of three election judges to verify voters’ signatures and the validity of the ballot. Previously, only one election judge made this determination.

Also per the new laws, permanent branch polling places are required to be open from 8:30 a.m. to 7 p.m. on weekdays and from 9 a.m. to 5 p.m. on the weekends and holidays for early voting. Curb-side voting, allowing voters to fill out the ballot outside of the polling place, will also be permitted.

Completed vote-by-mail ballots can be returned at new collection sites, which HB 2238 requires to be locked and opened only by election authorities.

The legislation also requires local election authorities to establish a central voting site where anyone who lives in the jurisdiction can vote, regardless of precinct.

The new laws take effect immediately and only apply to the 2020 general election.